While Tunisian security forces managed to suppress a demonstration of the ultraconservative Islamist group Ansar Al-Sharia on Sunday, the organization continues to grow in numbers and power. 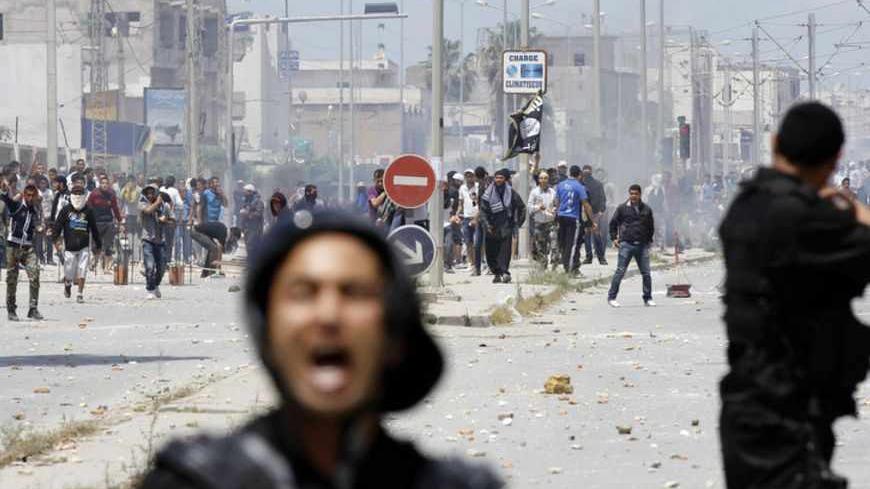 KAIROUAN, Tunisia — The third annual meeting of Ansar Al-Sharia (Supporters of sharia or Islamic law) was supposed to be a huge gathering — organizers had said 40,000 would turn out to support the installation of an Islamic state in Tunisia. With authorities having banned the congress, many feared confrontation, even bloodshed.

Instead, the square in front of the Great Mosque of Kairouan was filled with police running training drills, and the violence — a young man killed in a poor suburb of Tunis — took place 150 km [93 miles] away.

So what happened? Slah Ahmidi, a resident of Kairouan who works at the local tobacco factory, summed up the opinion of most observers: “The leaders [of Ansar Al-Sharia] made a mistake. They wanted to challenge the state and the state said, 'No one challenges the state, the law applies to everyone.'”

The show of force by Tunisia's security institution was clear and effective. In Kairouan, the show was exactly that: a spectacle. Police jogged with German shepherds and drove in circles with armored cars adorned with Tunisian flags. In Hay Ettadhamen, the neighborhood of the capital where Ansar Al-Sharia attempted to move their meeting, it was quite real: Clashes with local Salafists and residents ended with one 27-year-old shot dead.

But if Ansar Al-Sharia may have made a strategic error in maintaining their call to rally, that doesn't mean that the group is weakening.

In a mosque in a neighborhood away from the tourist-friendly city center of Kairouan, another mosque was the venue of an unannounced rally. Several hundred men, many wearing the the bright orange vests of Ansar Al-Sharia and nearly all in traditional, Arab Gulf-style dress, waved the black and white flag and chanted the Muslim declaration of faith; their voices could be heard from a half kilometer away.

Outside the mosque, a large man with a shaved head and a blue qamis gave a definitive answer to whether Ansar Al-Sharia needed the government's go-ahead to hold its congress: “Do we need to ask permission to pray?” the man thundered to the crowd gathered around him, who responded with cries of “God is great.”

In Kairouan as in cities throughout Tunisia, Ansar Al-Sharia has slowly built up a powerful following by providing social services such as food and medicine in regions of the country that have long suffered from lack of access to state infrastructure.

“They welcome people, they perform charitable works that the state doesn't do: caravans bringing food aid, assistance, clothes, in every corner of the country in the poor neighborhoods,” said Houssem Signi, a student from Kairouan.

They also maintain good relations with neighbors, treating those around them with a politeness and respect that go beyond what's normally expected by Tunisian etiquette.

Mahfoudh Briki, an employee of the Ministry of Equipment, noted, for example, that after last year's congress in Kairouan, a contingent from the group stayed behind to clean the square in front of the Great Mosque, returning it to a state “better than before.”

Neither Signi nor Briki professed any affiliation with Ansar Al-Sharia, but they, like many residents of Kairouan, had nothing but kind things to say about them.

Ansar Al-Sharia's relations with the press, on the other hand, tend to be marked by suspicion bordering on paranoia. But on Sunday, several activists in the group nevertheless welcomed a small group of journalists with mango juice and cookies, though only after erasing this journalist's sound recorder and refusing to give any of their names.

The members decried the media's image of Salafists, followers of ultra-conservative Islam like that espoused by Ansar Al-Sharia.

“If you say that there is 'moderate Islam' that means that there is extremist Islam. But in fact, there is only Islam,” said one member of the group, “The Quran and the Sunna.”

He described Ansar Al-Sharia's activities in Kairouan thus: “We do charity, we don't take money, we work in the way of God.”

However, the organization's goodwill campaign puts an appealing face on a set of views that remain well outside the norm of even conservative Tunisian religious practice: They believe in literal application of sharia.

All interviewed members felt, for example, that the only appropriate punishment for insulting the Prophet Muhammad was death.

There is no definite evidence that Ansar Al-Sharia in Kairouan or any affiliated group in Tunisia has carried out such sharia-based punishments. But whether through advocating its own law, providing social welfare services, or going face-to-face with security services in violent demonstrations, its intention appears more and more to be to challenge the sovereignty of the state.

In a message before the planned congress, the group's leader, avowed jihadi Abou Iyadh, said that the government's decision to ban the rally moved the country towards war and that this war “was not against these youth, but against religion.”

For a group that takes religion as seriously as does Ansar Al-Sharia, a “war” against Islam would seem to have ominous consequences.

While Ansar Al-Sharia's challenge to the state fell flat on Sunday, it may find more support the next time around — particularly as security forces continue to resort to violence.

From Kasserine, to Kairouan, to Hay Ettadhamen, the police in Tunisia remain a hated institution in Tunisia. In spite of efforts at reform by NGOs and measures like the appointment of a secretary at the Ministry of the Interior charged with reform, security forces continue to use brutal methods to disperse protests, such as beatings, throwing stones, and birdshot.

“In all honesty, they don't respect the law. Maybe not all of them are like that, but most,” said Signi, the student from Kairouan, an opinion that was quickly echoed by his friends. Go to nearly any downtrodden neighborhood in Tunisia and ask people's opinion of police and you're likely to hear a similar statement.

Giving free reign to these security forces to suppress Islamist protesters can only further discredit a government whose stock is already low due to a declining economy and a political transition which has fallen well behind schedule.

As it turns out, the young man killed during the protest in Hay Ettadhamen was not a member of Ansar Al-Sharia or indeed any Salafist group. In a radio interview, his uncle stated that Dahmani had no political affiliation and had in fact been previously living in Italy, returning for a marriage party. His account is backed up by residents of the neighborhood.

In an address on national television, Prime Minster Ali Laarayedh said that Ansar Al-Sharia was “involved in terrorism.” If the government plans on responding to security threats with old-regime-style violence, it may have a hard time convincing Tunisians that it's not they who are the terrorists.

Mischa Benoit-Lavelle is an American freelance journalist based in the Tunisian capital. Before becoming a freelancer, he was a senior editor for the country's first English-language news website, Tunisia Live. He is currently the English-language correspondent from Tunisia for the French news network France