A newly proposed media law is a setback for press freedom in Sudan, Reem Abbas reports from Khartoum. 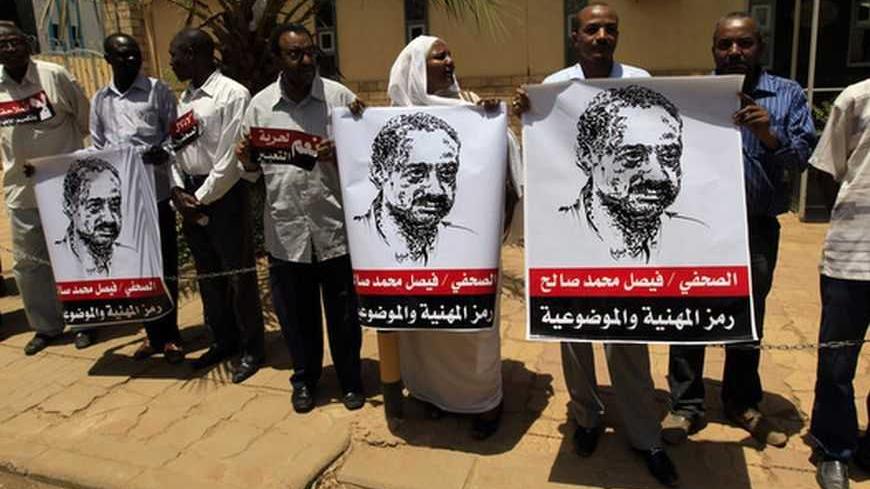 Journalists carry banners depicting journalist Faisal Mohamed Saleh during a demonstration against violations of the security services to the press and journalists outside the Council of the Press and Publication, Khartoum May 16, 2012. - REUTERS/Mohamed Nureldin Abdallah
Reem Abbas
@@ReemShawkat
January 17, 2013

KHARTOUM, Sudan — A few weeks ago, a mysterious document appeared at the national assembly, the Sudanese parliament. It was a draft for a press law, put together by a body which has yet to reveal its identity.

Normally, such a document should be submitted to the political sector of the National Congress Party (NCP) — the ruling party of Sudan — which verifies the bill and hands it to the national assembly after consultations with the Press Council, the Journalist’s Union and the media in general.

The document made its own way to the national assembly, to the dismay of journalists who were shocked to find the new laws were more repressive than the 2009 press law, which were then dubbed the "worst press law in Sudan's history."

Afaf Tawor, who represents the media committee in parliament, told journalists on Dec. 1 that the new laws "have penalties including fines for journalists, suspending a journalist from writing for up to two months, suspending an editor-in-chief from work and confiscating press cards from both."

The new press laws legalize closing a newspaper or a press center, as well as cancelling the registration of a publishing house. The laws also subject newspapers and other media institutions to financial penalties.

Hussein Saad, the media coordinator for the Sudanese Council for Defending Rights and Freedoms — an independent body of human rights defenders, lawyers and politicians — told Al-Monitor that the Sudanese press is already going through a difficult time and if the press laws profiled by Tawor are approved, it will be a disaster.

"The margin for freedom of expression has become nearly nonexistent, and the Sudanese press is already subjected to pre-publication censorship; newspapers are closed and confiscated. Closures and court cases against journalists have become common,” said Saad, once a journalist at the now-suspended Ahjras Al-Hurriya and Al-Midan newspapers.

The 2009 press laws were passed by parliament even though journalists objected and held silent protests and submitted petitions. The laws gave the state more control over the press and the state-run Council for Press and Publications more power to suspend newspapers and control the registration of press companies.

Mahjoub Mohamed Saeih, the godfather of the Sudanese press and founder of Al-Ayam, one of the oldest newspapers in Sudan, said that he does not understand how such laws could be passed if they did not come through the normal legal process.

"The Press Council and the Journalist's Union said that they did not submit these laws; it is from an unknown source. This is unacceptable, and they should be drafted through the usual process," said Saleh in a phone interview.

Saleh added that if these restrictive laws are passed, it will be dangerous to the future of democracy and freedom of expression in Sudan.

Mohy Al-Deen Titawy, the president of the Journalist's Union, rejected the new laws as the worst press laws since 1990 and stressed that the bill was not drafted by journalists or media professionals.

A committee including Titawy was formed to amend the press laws based on the recommendations by the Journalist's Union and the NCP, which will then present a bill to journalists and editors for further discussion before submitting it to the national assembly.

The 2009 press laws, as problematic as they were for press freedom, had fewer restrictions. They gave the Press Council the power to freeze a newspaper for three days for not abiding by journalistic ethics, whereas the new press laws bring this up to ten days, which could add financial strain on newspapers.

Additionally, the 2009 laws state that the editor-in-chief is responsible as the main party in any court case against a newspaper. The new bill, however, places the responsibility at the feet of journalists, the editor-in-chief, the printing house and the company under which the newspaper is registered.

"This could turn the printing house, which has no say in the editorial policy of the newspaper, into a censoring body, as they could refuse to print my newspaper since closure is a great financial burden they cannot afford," said Idris Al-Douma, the editor-in-chief of Al-Jareeda, one of Sudan's best-selling independent newspapers.

Al-Douma believes that this draft was leaked to test the reaction of the journalists, the press council and the union.

"Our reaction was anger since the new press laws will restrict press freedoms and halt the development of the press in Sudan," said Al-Douma in an interview with Al-Monitor.

Since 2009, the main body responsible for taking action against newspapers and journalists was the National Intelligence and Security Service (NISS), which forcibly shut down more than five newspapers, conducted pre-publication censorship, confiscated issues from the printing house before distribution and took more than 10 journalists to court.

The NISS is permitted to take action against any newspaper viewed as a threat to national security under the controversial National Security Act.

"The actions of NISS reflected negatively on the government and these new press laws are, in my opinion, an attempt to legalize NISS's actions by shifting them to the functions of the press council," said Al-Douma, whose newspaper was suspended for three months in 2011.

Al-Douma fears that the press laws will be passed by the national assembly in its April session.

"The ruling party has a majority of seats in parliament, and they are very keen on staying in power. The press is an impediment to that," said Al-Douma.

Abdel-Gadir Mohamed, a press-freedom advocate and author of a book on the freedom of the press in Sudan, is also not optimistic about the future.

"Last week, the president hired his vice president, Nafie Ali Nafie, and the chief of NISS in the higher council for media policies, which is more worrying than the press laws," Mohamed told Al-Monitor.

In the meantime, journalists are waiting impatiently for the draft to be discussed by the Press Council and the union, and their recommendations to the press laws.

Reem Abbas is a Sudanese freelance journalist based in Khartoum and an award-winning blogger. She currently contributes to www.theniles.org. Her Twitter: @ReemShawkat.