Anti-government Sudanese protesters vow to keep their rallies peaceful, despite the violent crackdown by security forces that have left dozens dead in the past week. 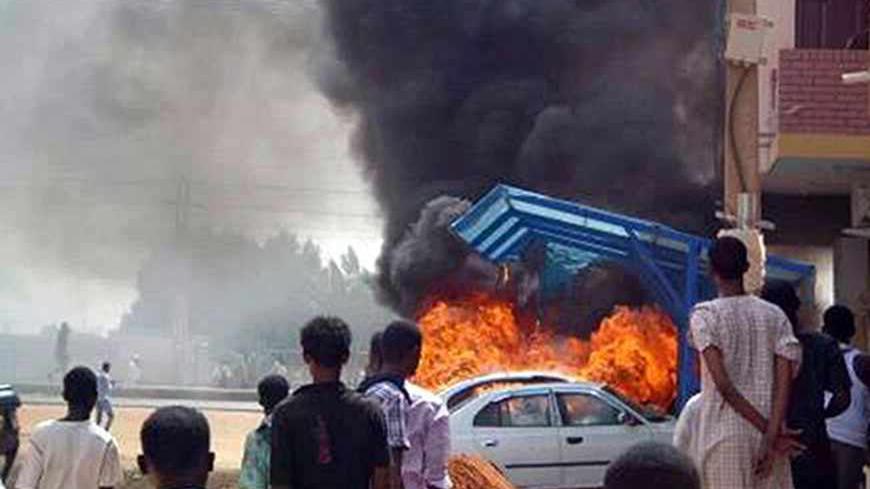 KHARTOUM, Sudan — On Sept. 28, at least 3,000 people joined a protest that took place after the burial of Salah al-Sanhouri, 28, who was shot dead in a raging anti-government protest the previous day. In a video circulated online, Sanhouri is seen standing, unarmed and participating in a peaceful protest, as part of a widespread protest movement that began in Sudan on Sept. 23.

Saturday's protest began after Sanhouri was buried in Buri cemetery. The protesters marched for two hours from Buri to Street 60, one of the main streets in Khartoum.

"The police began firing heavy tear gas and rubber bullets to crack down on the protest, then the live bullets began," said Hamid Mohamed, an engineer who joined the burial and protest. Mohamed's friend was injured by a rubber bullet to his head and taken to the hospital right away.

"I saw an older man who was shot in his leg by a live bullet," Mohamed told Al-Monitor in an interview. He added that there were more injuries, but because people dispersed he could only confirm the ones he witnessed.

Peaceful is what activists have called the ongoing protests in Sudan, which began in Medani, the capital of Jazeera state, on Sept. 23, a day after President Omar al-Bashir announced new economic measures to save the collapsing Sudanese economy. Economic measures include the lifting of fuel subsidies, which immediately caused prices to double.

The protests in Medani saw civilian deaths as well as the burning of gas stations, the symbol of this round of economic measures. The next day, the anger spread to Khartoum and other cities in Sudan.

On Sept. 25, the building of the ruling National Congress Party (NCP) in the Ombada locality in Khartoum state was burned to ashes in addition to two police stations and various gas stations.

The Sudanese government has refused to admit that protests are happening in Khartoum, accusing instead the Sudan Revolutionary Front (SRF), a coalition of armed movements, of instigating acts of violence in the state and referring to the protesters as homeless people and thugs.

State television and government-owned newspapers have reiterated the government's message, showing videos of groups of youth burning cars and vandalizing, while activists and independent media have accused the government of using thugs to scare the public and imposing a media blackout, as various newspapers were confiscated and the Internet shut off for over a day.

However, speaking to the national radio on Sept. 27, Sudanese Interior Minister Ibrahim Mahmoud admitted that over 600 people who took part in the protests have been detained since last week. While Mahmoud spoke, Omdurman city — a locality in Khartoum state — was brewing, as thousands of protesters walked for over an hour from Wad Nobawi to Street 40.

It was 16-year-old Sara Yousif's first protest, the first time she expressed her anger at the government. Yousif just took the high school exam and will go to college next month. "I am out because I want the government to leave; we want a better life," said Yousif, who was encouraged by the pictures of protests she received on WhatsApp, the smartphone instant messaging application.

Yousif marched with her sister, cousin, aunts and uncle. The group walked to Wad Nobawi, where the protest began, joining large numbers in chants calling for the toppling of the government, screaming that they will give their blood and lives to Sudan.

Each time the protest passed soldiers, riot police and security agents, they chanted the word peaceful, emphasizing that they are unarmed protesters who only want to express themselves.After an hour of marching and chanting, the protest stopped, and the protesters began singing the national anthem. At this point, riot police and security soldiers surrounded the large protest from the front and the back and shot tear gas canisters and live bullets.

The scene was chaotic with several thousand protesters running into side streets and houses on the main street. Some leaving their bags and shoes behind, some fell to the ground, injured, while others were lost and confused, searching for their loved ones.

Yousif found herself alone, separated from her elder sister, who had been holding her hand, as well as other family members. "I ran into one of the houses, then jumped the wall to another house and then jumped many walls before I found myself on a side street. I then ran to my aunt's house," said Yousif, who was worried about her family at the time.

Some protesters found safety, some went to the hospital with broken bones and gunshot wounds, while others were arrested.

The Sudanese government has admitted the deaths of 33 people due to "uncontrolled gangs"; however, the Sudanese Doctors Syndicate estimated that 210 people have been killed during the protests.

"My neighborhood in Omdurman was a war zone for days. We kept screaming as they fired tear gas and live bullets, while men from my neighborhood were injured and others died," Fatima Saeed, who works for an international nongovernmental organization, told Al-Monitor.

Saeed wants regime change in Sudan, but cannot comprehend how much more lives will be lost. "Our strong protests have been suppressed by the live bullets, and they have arrested many youth in my neighborhood. The security has a list of names they arrest from," Saeed said.

The protests continued on Sept. 29 in Kassala, eastern Sudan, and spread to Ahfad University for Women on Sept 30.

“We are locked inside the campus, the police are surrounding us and we are chanting against the regime. They fired tear gas at us on campus,” said Ola Abdullah, who spoke to Al-Monitor on the phone.

It is unclear how the violence will impact the nonviolent nature of the protests, but until today protesters have insisted that their protests will remain peaceful.

All names were altered to protect the identity of the interviewees.

Reem Abbas is a Sudanese freelance journalist based in Khartoum and an award-winning blogger. She currently contributes to www.theniles.org. On Twitter: @ReemShawkat