The death of four students, allegedly at the hands of security forces, risks unleashing a new wave of anti-government unrest as Sudan struggles to contain internal divisions and a growing economic crisis, Reem Abbas writes from Khartoum. 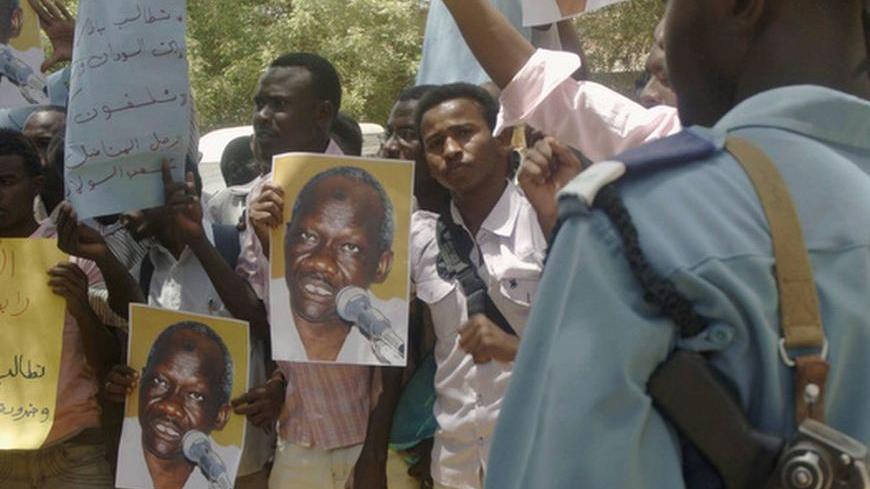 Students demonstrate, calling for the release from detention of Talafon Kuku Abu-Jalaha, a leading figure in the Sudan People's Liberation Movement (SPLM), outside the UN building in Khartoum, March 26, 2012. - Reuters
December 15, 2012

A week ago [Dec. 7], dozens of students from Al-Jazeera University, 300 kilometers (186 miles) from Khartoum, camped in front of the morgue of Medani Hospital in Wad-Medani, the capital of Al-Jazeera state, guarding the corpses of two students.

Earlier that day, the bodies of the two first-year agricultural-studies students, Adil Hamad and Mohamed Younis, were found in a sewage pond not far from the university.

"On Wednesday [Dec. 5], six students went missing after a forum at the university to discuss the plight of Darfuri students was attacked by security officers," said Mohamed Ahmed, a student at Al-Jazeera University who was waiting outside the morgue.

Last week, students of Darfuri origin protested against the decision of the university's president to make Darfuri students pay tuition fees. Darfuri students were exempted from such fees in the 2006 Darfur Peace Agreement. In the 2011 Doha Document for Peace in Darfur (DDPD), article 14 on universities and state-run higher education institutions states that "all students who are offspring of IDPs [Internally Displaced Persons] and refugees from Darfur states duly admitted by the admission committee to national universities shall be exempted from educational fees for five years."

Many of the students lack the documents to prove their status and a committee to equip them with the necessary documents was never formed, leaving the students unable to prove that their families were impacted by the conflict.

"The university complicated the matter for Darfuri students and some were told to fill out a form found at the University of Nyala in South Darfur or bring documents to prove that they are Internally Displaced Persons (IDPs)," added Ahmed.

Later that day, a third body was found, a second-year student named Al-Sadig Abdullah. On Saturday, a fourth body was found and protests broke out in various parts of Wad-Medani.

In a phone call during the burial of the students, Ahmed said that "students were angry and the security presence was very high and officers continued to harass students."

The police department and Al-Jazeera University's administration, respectively, issued statements over the weekend arguing that the students had drowned in the pond.

Ahmed, who spoke to Al-Monitor from Medani, said that the sewage pond is only 1 meter deep, thus making it impossible for the students to drown.

"The witnesses said that there were signs of torture on the bodies recovered from the sewage pond," said Hanadi Fadul, a Medani-based lawyer following the case, adding that students are convinced that their peers were tortured to death after their arrest.

On Sunday, protests spread in Khartoum state and to different parts of Sudan, mostly led by students, with the most common slogan being chanted: "The death of a student is the death of a nation."

Protests spread from the University of Khartoum to the Arabian Souq in downtown Khartoum and to Jackson Square, the largest bus station in Khartoum.

Mohamed Al-Sadig joined the Jackson Square protest, moved by the deaths of the four students.

"Regardless of where you come from in Sudan, if you have any sense of humanity, you would join the protests," said Al-Sadig, adding that the cause is not limited to Darfuri students, but to all Sudanese people.

The protests were also met by force, according to Abdelmoniem Mohamed Adam, a lawyer who was detained and beaten for his participation in the rally.

"There was no interrogation, it was just beatings during the arrest and in the car on the way to the police station. When you reach there, your clothes are torn from the beatings," he said. At least 100 protestors were detained with him at the Northern Police Station that day, Adam said.

The protests continued during the week with other universities joining in. On Monday, student police and police officers broke into Al-Nileen University in Khartoum, and beat students with metal rods and canes.

On Tuesday, female students at the dorms of the University of Khartoum in Shambat stood outside the dorms demanding the release of their colleagues arrested during the protest organized earlier in the day. The students were kept at Al-Safia Police station until they were bailed out by their families later that night.

To many inside and outside Sudan, this wave of protests is reminiscent of the June/July protests, commonly known as the "Sudan Revolts."

The Sudan Revolts were the largest wave of anti-government protests since the 1989 coup that brought the current regime to power.

Protesters were enraged by the removal of subsidies on petroleum, which came as part of a series of austerity measures imposed by the Sudanese government, leading to a rapid increase in food prices. On June 16, female students from the dorms took to the streets to protest the increase of food prices at their cafeteria, resulting in a clash with the police force and renewed protests across Khartoum.

Although this latest wave of protests have been inspired by student deaths, their slogans clearly reflect growing anti-government sentiments, with chants calling for the overthrow of the regime being heard across campuses and streets in Khartoum.

There remains, however, continued international cynicism about whether the protests can continue and lead to real change in the country, as the initial summer protests dissipated.

Mohmmed Adil, a youth leader from the opposition party, the National Umma Party (NUP), said that these current protests were different and expects changes to happen.

"The economic situation is at its worst and there are internal divisions within the ruling party because the cake is smaller now. The tap that brought petrodollars to a large circle inside the government is now closed," he said in a phone interview.

Kamal Omer, member of an opposition coalition grouping the Popular Congress Party (PCP) and the National Consensus Forces (NCF), reiterated that internal divisions within the ruling party are having a significant impact on the government’s behavior.

"The internal problems in the ruling party are causing them to panic," said Omer, referring to the arrest of the head of the NCF, Farouk Abu-Eissa, this week from his home after calling for anti-government protests during the week.

In November, government forces arrested at least 13 top military and security leaders accusing them of plotting a coup. The detainees include former spy chief Salah Gosh and a military leader known as Wad Ibrahim.

Just last week, the head of the National Intelligence and Security Services (NISS), Mohamed Atta Al-Mannan, told the press that it was a coup attempt that had been dismantled.

Sudan's 2013 budget showed a deficiency reaching 10 billion Sudanese pounds, and calls persist within the government to remove further petrol subsidies. It remains unclear whether the parliament will agree and pass this bill next week, but it is almost certain that removing more subsidies will trigger mass protests in an already growing protest movement.

Reem Abbas is a Sudanese freelance journalist based in Khartoum and an award-winning blogger. She currently contributes to www.theniles.org. Her twitter handle is @ReemShawkat.