Sudanese journalism bodies have signed a draft charter to establish a new union in a win for post-coup press freedom. 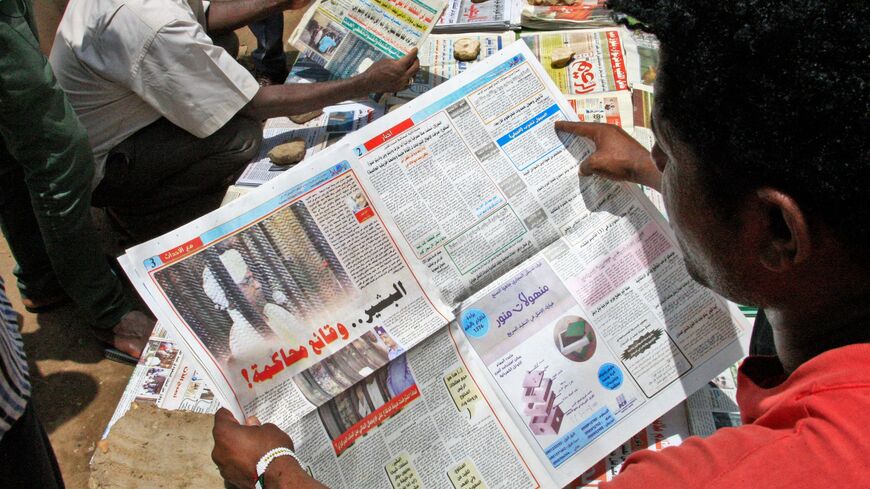 A Sudanese man reads a newspaper on Aug. 20, 2019, covering the court appearance of Sudan's deposed military ruler Omar al-Bashir during the opening of his corruption trial the previous day. - EBRAHIM HAMID/AFP via Getty Images

CAIRO — In a move long awaited by Sudanese journalists, three press bodies in Khartoum signed a press code of honor and other documents for the Sudanese Journalists Syndicate, a big step toward reestablishing a professional union for journalists. The documents include draft statutes and a press code of honor, which will be presented to the members for discussion and final approval.

The signing was the culmination of efforts to restore the organization since the head of the Sudanese Sovereign Council, Lt. Gen. Abdel Fattah al-Burhan, dissolved syndicates and professional unions. Press entities in Sudan had been split since the coup of April 11, 2019, and the ouster of President Omar al-Bashir.

The signing came as a result of an initiative by journalist Faisal el-Bagir, general coordinator of the Sudanese network Journalists for Human Rights, who stressed during his speech at the signing ceremony the importance of a syndicate to protect the rights of Sudanese journalists.

Bagir added that the syndicate “is in support of the Sudanese people and the slogans of the December revolution, upholding democracy, justice and human rights.”

Hussein al-Zanati, editor-in-chief of Egypt’s Al-Ahram and a member of the Egyptian Journalist Syndicate Council, welcomed the formation of a journalist syndicate in Sudan to bring together fellow journalists.

Speaking to Al-Monitor, Zanati said he hopes the syndicate will serve their interests and provide them professional services without entanglement in political conflicts.

Zanati said the “Egyptian Journalist Syndicate supports and welcomes any entity that seeks to preserve the interests and rights of journalists in all Arab countries.” He added, “The Egyptian Journalist Syndicate supports the endeavors of fellow journalists, whether in Sudan or elsewhere, to launch a professional syndicate or union, as long as it protects and serves their interests. Egypt is represented in the federation, which is concerned with preserving the rights of fellow journalists in the entire Arab region.”

Musab al-Hadi, a journalist with the Sudanese Al-Nokhba magazine, told Al-Monitor that a syndicate is vital for journalists and media outlets not only in Sudan, but all over the world, to monitor and defend press freedom.

Hadi said, “It is in the interest of the press entities in Sudan to have a professional union that would represent them before all state institutions and defend journalism. Journalist unions around the world are like fortresses for press freedom. A union in Sudan is a guarantee not only for journalists, but for all sectors and groups of the Sudanese people.”

“The timing of establishing a professional syndicate for journalists in Sudan is very important in light of the political tensions in the country. The presence of a syndicate to protect Sudanese journalists from arrest and other persecution is essential. The syndicate will also help journalists obtain press permits” and provide venues for redress, Hadi added.

The charter also sets representation of female journalists in the union at no less than 40% and says the body will fight any repressive practices against the press.

Ahmed al-Mufti, a former member of Sudan's delegation to the Grand Ethiopian Renaissance Dam negotiations, told Al-Monitor that it's vital that the signatories abide by Sudanese law so that the charter will be considered legal.

“The press entities that signed the charter must have legal standing to do so, because failing to have that, other press bodies will come up with their own organizations, claiming to be the sole representatives of journalists.”

He added, “The Sudanese journalist syndicate should protect the rights of all its members, as opposed to a political body" that serves "their political interests and not those of their members.”