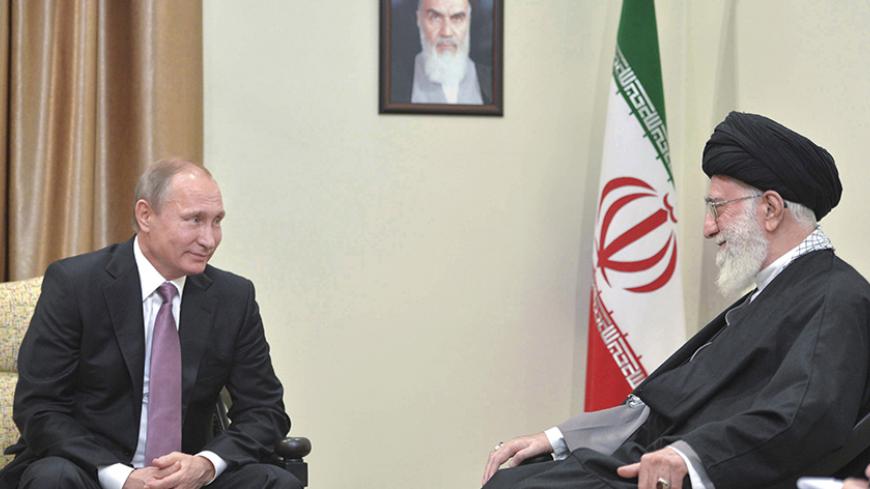 Putin made the trip, his first to Tehran since 2007, for a summit of gas-exporting countries. But during a separate meeting with Khamenei, Syria was the dominant topic. The supreme leader’s office provided a partial transcript of the two-hour meeting, which Fars News Agency posted on its website.

Khamenei praised Moscow’s policies in the Middle East, particularly in Syria, saying they have increased the stature of Russia and Putin himself. In late September, as Russia said it would enter the fight against the Islamic State in Syria, Russia significantly increased its military support to President Bashar al-Assad, helping the beleaguered Syrian army with Russian air power.

Khamenei criticized US policies in Syria, saying, “It is a threat to all nations, especially Russia and Iran.” He warned that the United States and its allies, having failed to accomplish their goals in Syria via armed conflict, are now pursuing the same goals via negotiations. Khamenei believes that the US’ goal in Syria is to reassert its dominance in the Middle East.

One of the sticking points in the talks currently taking place is the fate of Assad. Those who support opposition fighters in Syria, including Saudi Arabia, have pushed for a time frame for Assad’s ouster in any type of negotiated settlement. Iran has repeatedly rejected this. Khamenei said Assad is the elected leader of the country and “the US has no right to ignore the elections and choice of the people.”

Khamenei also said the US’ cooperation with countries in the region that support terrorist groups in Syria shows that “America does not have honorable diplomacy.”

"For this reason, other than the nuclear issue, we will not have bilateral negotiations with America neither about Syria nor any other issue,” he added.

Khamenei praised Putin as an outstanding figure in the region and the world and thanked him for his efforts in bringing about a final nuclear deal between Iran and the six world powers. While the United States and President Barack Obama’s administration played a significant role in bringing about the nuclear deal, Khamenei said, “We do not have any trust in the Americans, and with open eyes we will observe America’s behavior and performance.” Before leaving for Tehran, Putin had signed a decree easing restrictions on the export of nuclear equipment and technology to Iran.

Putin called Iran a “certain and reliable ally in the region and the world.”

"Unlike some others, we do no betray our partners," Putin said. The transcript did not clarify specifically what Putin was referring to, but given Russia’s prominent role in political negotiations and its diplomatic efforts with Iran’s rivals in the Persian Gulf, there have probably been incentives and pressure to reduce support for Assad.

However, Putin added that Iran and Russia are "very close" in their positions on Syria.

"Only a political path and the acceptance of the vote of the people and the wants of all the Syrian groups will resolve the crisis, and no one is allowed to impose their views on the people and decide in their place the structure of the government or the fate of the president," Putin said. He also agreed with Khamenei’s sentiment that the countries opposed to Assad are now pursuing their goals via negotiations, saying, “We are careful of this issue.”

As the meeting ended, Putin gave Khamenei one of the oldest Quran manuscripts as a gift.

While the two leaders did not discuss this, there were reports of progress on the delivery of S-300 missiles to Iran from Russia. Iran had paid for the missiles, but they were held up because of international sanctions on Iran. According to Mehdi Sanei, Iran’s ambassador to Russia, “Iran and Russia signed a new contract, and the procedure of the delivery of S-300 has started.”