In letter to Putin, Khamenei says Iran 'will not wait' 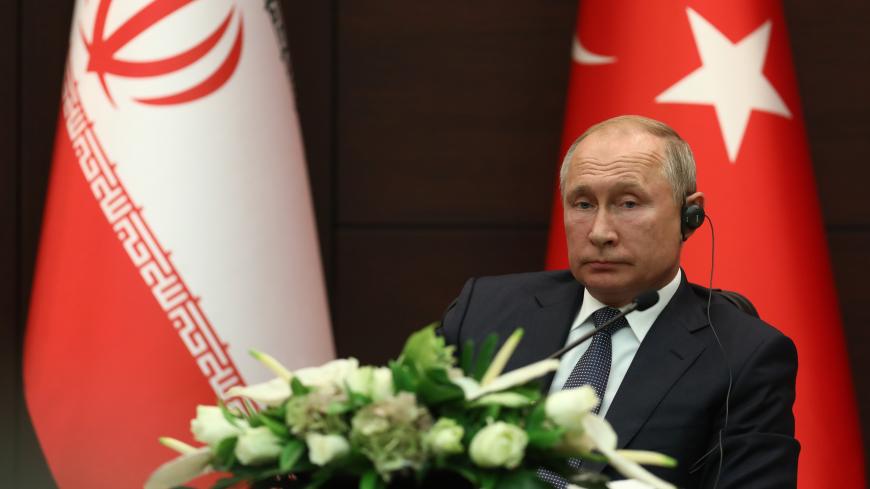 Russian President Vladimir Putin attends a press conference with the Turkish and Iranian presidents after their summit in Ankara, on Sept. 16, 2019. - ADEM ALTAN/AFP via Getty Images

According to an adviser to Iran’s parliament speaker, Amir Hussein Abdollahian, Iran’s supreme leader sent a letter to Russian President Vladimir Putin about the need to strengthen ties and the status of the nuclear deal.

Speaker Mohammad Bagher Ghalibaf travelled to Moscow to personally deliver the letter from Ayatollah Ali Khamenei. According to Abdollahian, who published the note on Khamenei’s website Khamenei.ir, “This trip was timed for when there are new tenants in the White House and sends Iran's allies the message that we will not be delayed any longer with White House's games with respect to the nuclear deal.”

The United States exited the nuclear deal, the Joint Comprehensive Plan of Action (JCPOA), in 2018 and reapplied sanctions on Iran, severely impacting the country's economy. Iran, citing Article 37 of the agreement, took steps to reduce its compliance with the JCPOA but technically remained within the agreement. Now the two sides are debating which will return to full compliance first.

The letter also emphasized the need to focus on Asia. “The 21st century is the Asian century,” Abdollahian wrote, adding that many Asian countries including Russia, China, India, Pakistan, Malaysia and Indonesia have significant roles to play and many of them have not yet realized their full capabilities.

Abdollahian also addressed a domestic controversy over Ghalibaf not personally meeting with Putin, writing that due to the urgency of the letter Putin wanted to immediately read it rather than waiting for the mandated health protocols. After reports that Ghalibaf was to personally meet with Putin, Iranian media outlets reported that due to quarantine requirements, the planned meeting with Putin would not take place. Ghalibaf instead delivered the letter to his Russian counterpart. Abdollahian insisted that the meeting with Vyacheslav Volodin was done while Volodin was acting as Putin’s adviser and not as his title as the head of Duma — in an apparent effort to elevate the status of the meeting.

The fallout led to highly partisan gloating in Tehran, where supporters of Foreign Minister Mohammad Javad Zarif shared pictures of Zarif’s previous meeting with Putin. Ghalibaf, a conservative politician and former presidential candidate who some suspect still harbors presidential aspirations and was perhaps looking to use this trip to elevate his stature, has been critical of the Hassan Rouhan administration's domestic and economic policies.

Perhaps Tehran chose to reveal the letter's contents because of the controversy over what some took as a snub of Ghalibaf. In Iran’s “look east” policy, Russia, along with China and India, have been major focus points for the country in terms of increasing ties and trade. After the US withdrawal from the nuclear deal and many countries in Western Europe avoiding trade with Iran, Iran has been forced to seek alternative partners.