In the battle against IS, where is the Arab coalition?

Arab countries claiming their opposition against the Islamic State have stood down in their battle against the self-proclaimed "Caliph Ibrahim," creating a political void in the coalition. 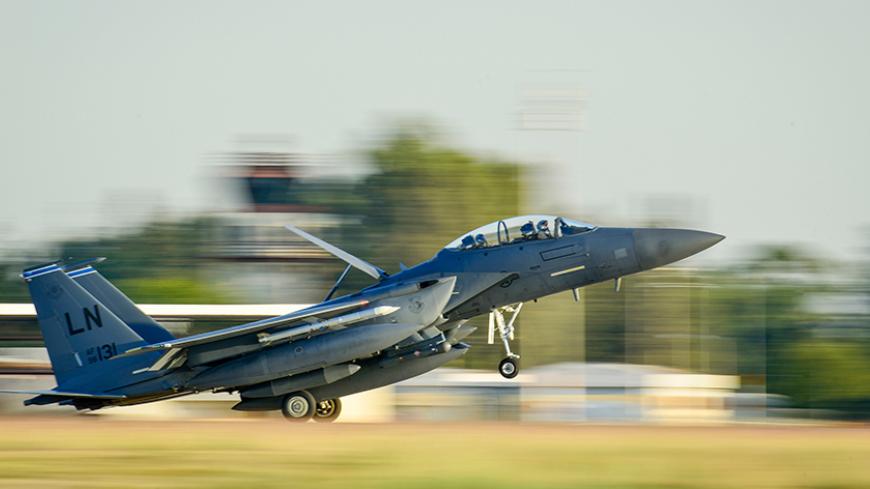 A US Air Force F-15E Strike Eagle from the 48th Fighter Wing lands at Incirlik Air Base, Turkey, Nov. 12, 2015. Six F-15Es are deployed in support of Operation Inherent Resolve and counter-IS missions in Iraq and Syria. - REUTERS

In the wake of the Islamic State's (IS) attacks in the Sinai Peninsula, Beirut and Paris, there is an urgent need to mobilize resources to deal with the threat, especially resources in the Arab world. Instead, Saudi Arabia and its Gulf allies are devoting their resources and efforts to a floundering and expensive military campaign in Yemen.

There has been no formal or public announcement of the stand-down. The Arab governments all reiterate their strong opposition to IS. This week, Riyadh's skyscrapers were lit in the French colors to express solidarity with Paris. King Salman bin Abdul-Aziz Al Saud told President Barack Obama in Ankara that Saudi Arabia will play a major role in Syria. But in practice, American military officials report the war in Yemen has drained Arab air power away from the fight with the terrorists in Syria and Iraq. Yemen is the priority even if some token operations occasionally are taken to strike IS targets.

The absence of Arab air forces creates a political — not military — void, even though Russia, France and America are fully capable of waging an air war against IS. The coalition is missing the Muslim answer to the self-proclaimed "Caliph Ibrahim." This is a waste of symbolically important resources.

The war is also expensive. No official estimates of the cost have been released, but it must now be running into the tens of billions in armaments, maintenance and other expenses.

For example, this week the Pentagon announced the sale of $1.29 billion in air-to-ground munitions and associated equipment to restock RSAF bombs used in the Yemen campaign. The sale provides close to 20,000 new munitions to replace those used already. The United Kingdom, another major source of the RSAF's inventory of aircraft, is also replenishing Saudi stocks. Amnesty International and Human Rights Watch have raised questions about the use of these weapons and possible war crimes.

Saudi Arabia has itself been targeted by IS repeatedly, as IS has carried out suicide bombings in both Saudi Arabia and Kuwait. It promises to overthrow the House of Saud and raise its black flags over Mecca. Hundreds of Saudi citizens are fighting with the terrorist group in Iraq and Syria, while Jordan has been a target of IS, with one of its pilots locked in a cage and burned to death. These states have a stake in this war.

But Riyadh's attention and resources are focused on Yemen as the war there has come to a stalemate. After some successes over the summer, the Saudi-led coalition had promised to capture Sanaa, Yemen's capital, this fall. That looks unlikely today. The war is also a humanitarian catastrophe for 25 million Yemenis, as the blockade prevents the supply of food and medicine.

Even worse is that the major beneficiaries of the war so far are al-Qaeda and Iran. Al-Qaeda has seized control of large parts of southeastern Yemen since the war began. Its black flags fly in Aden, the temporary capital of the pro-Saudi government. Al-Qaeda in the Arabian Peninsula has grown stronger in the months since it attacked Paris in January, not weaker. That is a disturbing portent for those now promising to defeat IS.

Iran is fighting to the last Houthi, laughing at the Saudis and Emiratis as they spend resources in what Tehran hopes will be an endless quagmire. Iran gains in Iraq and Syria from the Sunni forces' diversion to Yemen.

Washington and Paris have both indulged Riyadh's Yemen mission, as both have hosted Saudi Defense Minister Prince Mohammed bin Salman — the 30-year-old architect of the Yemen war — and have done far too little to bring an end to this disaster. They have the leverage, along with London, since they control the pipeline of military resupply to the RSAF and its allies, but their half-hearted attempts to start a political process need much greater urgency. Both sides have accepted UN mediation and the UN Security Council resolution for a cease-fire, but the conflict drags on without pause.

After the Charlie Hebdo massacre in January, there were promises that the terrorists in Yemen who launched the attack would face a global response. Instead, they are stronger than ever and Yemen has become another battleground in the sectarian Sunni-Shiite war that is devastating the Islamic world.