Propping up oppressive dictators won’t stop violence in the Middle East and beyond, and a sophisticated approach is needed to address the complex origins of terror in the region. 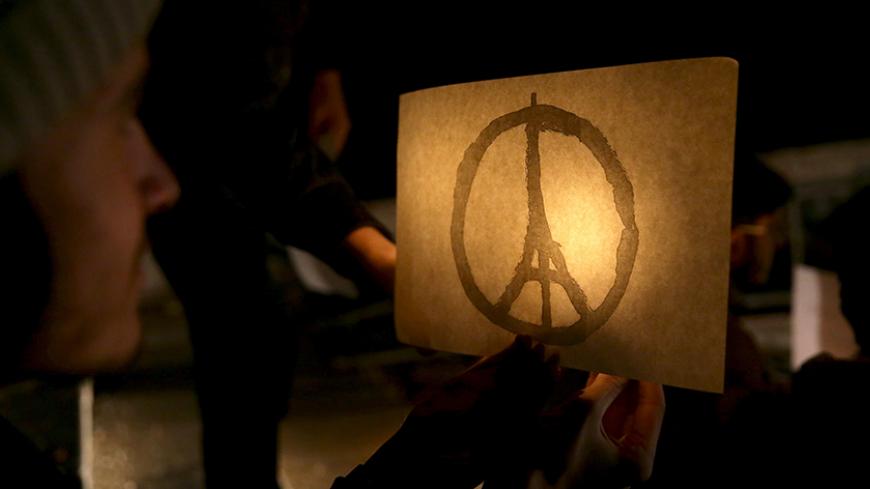 A man carries a candle and a placard with an image of the Eiffel Tower in tribute to the victims of the Paris attacks in the town of Douma, eastern Ghouta near Damascus, Nov. 14, 2015. - REUTERS/Bassam Khabieh

A new flood of terrorism has breached the collapsing old Arab order. No longer confined to the southern shores of the Mediterranean Sea, this tide of violence is now capable of reaching the heart of Europe.

The latest disaster, the atrocious Nov. 13 attack in Paris, is unlikely to be the last. At least 129 deaths were already reported in Paris at the time of this writing. In the same week, an attack on Dahiyeh, a southern Shiite suburb of Beirut, resulted in more than 40 deaths. Just before that, a Russian civilian plane was brought down over the Sinai Peninsula in Egypt. The Islamic State (IS) and its affiliates claimed responsibility for all the attacks.

Western governments long considered Arab dictators a solid shield against the proliferation of terrorist groups beyond their borders. The West worked with the dictators in the context of the war on terror after 9/11, but selectively removed Saddam Hussein of Iraq in 2003 and Moammar Gadhafi of Libya in 2011. The remaining Arab presidents and kings are now struggling with terrorism in peripheral regions of their countries.

Egyptian President Abdel Fattah al-Sisi does not seem to be in control of what goes on in Sinai. Saudi Arabia’s King Salman bin Abdul-Aziz Al Saud has not stopped the wave of terrorism that specifically targeted the Shiites of the eastern province or the Ismailis of Najran. President Bashar al-Assad of Syria has faced a five-year insurgency, while the Iraqi government has truly lost control over vast territories. If a state is a central agency with a monopoly on the means of coercion, most Arab states would not meet this criterion.

It is simplistic to consider this recent wave of terrorism merely a reflection of indoctrination that glorifies violence in the name of Islam or a direct endorsement of bigoted preachers of hate, most of whom are affiliated in one way or another to the Wahhabi-Salafi religious discourse dominant in Saudi Arabia. The main reason for the violence is the progressive collapse of the old Arab authoritarian political order, in which dictators ruled with an iron fist. The order began to crumble with the 2010-2011 Arab uprisings. It was naive to think that the moment these dictators were deposed, a new era of democratic transitions would prevail across the region. Those dictators had already suffocated civil society and eliminated any force that might have endorsed democracy. They encouraged a nasty alternative of regulating and controlling people’s social and religious behavior.

Social conservatism, bigoted religious discourse, surveillance of people’s behavior and even attempts to discern their inner beliefs had become an obsession of substantial sections of society, all seeking to reshape society according to a puritanical agenda. With the Arab uprisings, these forces sought their political places in the vacuum that was created.

They now resort to violence to assert their positions. They have moved from being conservative social and religious activists to violent political actors, eager to take advantage of every opportunity to create a new order to replace the vanishing authoritarian rulers. The result is turmoil that is difficult to contain. Neither airstrikes by multiple international forces nor local resistance have proved efficient or sufficient to contain the new menace, which has multiple objectives.

First, armed groups aspire to create a rift between the mainstream Sunni population and the various minorities in the Arab world. In Syria, Iraq, Saudi Arabia, Yemen and Kuwait, IS is determined to fight the Shiites they hold responsible for the plight of Iraqi Sunnis after 2003 and Syrian Sunnis after 2011. Attacks on other minorities such as Christians and Yazidis are simply an extension of their agenda to create a uniform world of Islam that has no historical precedent, but resides in their imagination of a pure and homogeneous community.

Second, these armed groups are still concerned with fighting central authority. In Tunisia and Egypt, their terrorism targets the state and its institutions, from museums to the military, and kills any public figure who offers alternative visions. Several such figures were assassinated in Tunisia after the uprising. The armed groups work to eliminate rather than negotiate with rivals; they aspire to create a political vacuum only they can fill.

Third, it is clear now that these terrorist groups are determined to punish any Western government willing to engage in local conflicts in Middle Eastern countries. The Russians and French — both of which aim to destroy IS, possibly strengthening Assad’s position — are the first casualties in response to the recent interventions in Syria. Even when Western governments appear to help with removing dictators, they are immediately punished for not placing the armed groups at the head of the resulting political order. Terror attacks on US targets in Libya after NATO removed Gadhafi were part of this scenario.

Finally, terrorism in the West such as the recent attacks in Paris aims to widen the rift between host societies and Muslim immigrants, who will no doubt be the first to feel any new security measures. IS and its predecessors such as al-Qaeda thought of Muslims living in non-Muslim-majority countries as a pool that must be reached, radicalized and recruited. By playing on the grievances some Muslims might have in their host countries, IS is recruiting an important young Muslim population. The more these young Muslims feel pressured or isolated in Western capitals, the better for IS and its goal of annihilating the perceived enemies of Islam.

The terrorism we are witnessing today in the Arab world and beyond is a clear outcome of the collapse of the old Arab political order and the inability of the region to create an alternative and stable new order. The weakening of regimes across the region created a vacuum that's being filled with the most atrocious and radical groups.

The solution does not lie in strengthening the old regimes or resuscitating them to suffocate the population even more, but in strengthening alternative forces that can act as a countercurrent to the existing terrorism menace.

These alternative forces include activists for human rights and civil society who promote a democratic vision calling for citizenship regardless of sect, ethnicity or religion. At the moment, these voices are struggling in places such as Egypt, Saudi Arabia, Bahrain, Syria and Iraq. Governments there have oppressed them, which is how radical groups gain their footholds.

The fundamental problem faced by these diffuse groups of activists is their fragmentation. Under authoritarian rule, they are not allowed to form truly open and independent organizations. Many civil activists, such as Nabeel Rajab in Bahrain and Muhammad al-Qahtani and Abdullah al-Hamid in Saudi Arabia, faced long prison sentences for challenging their authoritarian states.

In Egypt and Tunisia, their counterparts were instrumental in triggering the peaceful protest that swept the region in 2010-2011. But their inability to operate freely in public prompted them to keep a strong presence in the virtual world, allowing them to reach a wider audience but stifling their organizational capacity. With a degree of freedom, they could regroup and form open platforms to raise awareness and promote peaceful change.

Unfortunately, everywhere in the Arab world, civil activists are feared and locked up by oppressive regimes. In Egypt, Bahrain, Saudi Arabia and many other countries, they face serious obstacles when they peacefully call for civil and political rights. Strengthening these peaceful activists is not an easy and quick task. It may take years to develop and empower an alternative to IS to lead the region in completely new directions.