A new generation of Saudi writers is blending Islam and global values for freedom and dignity in calling for reform. 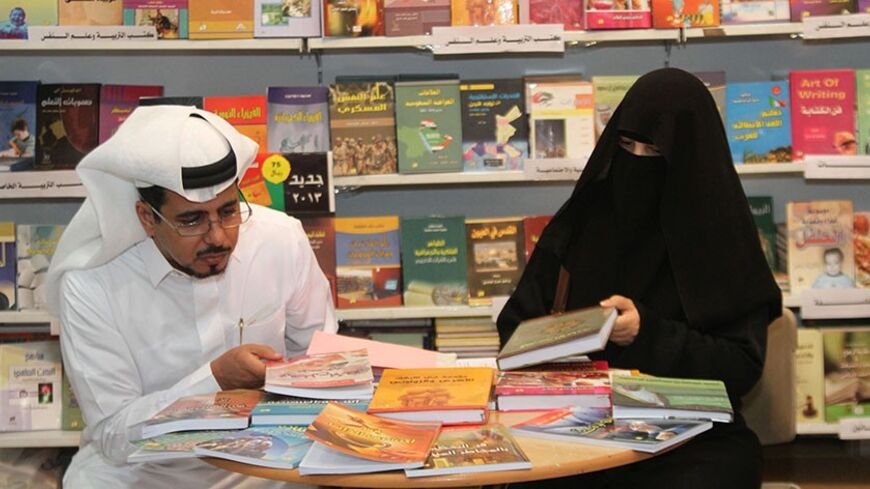 Visitors look at books during the Riyadh Book Fair at the International Exhibition Center in Saudi Arabia, March 7, 2013. - REUTERS/Susan Baaghil

No matter how much Saudi Arabia spends on public relations campaigns, for the foreseeable future, its name will probably remain associated with exporting radical Salafist-Wahhabi thought. Its religious tradition stands accused of encouraging terrorism, radicalizing Arab societies, inflaming sectarian conflict and widening the gender gap. Its religious education system and petrodollars have been held responsible for a wide range of conflicts and confrontations across the Arab region and beyond. Stories about its exceptional women occasionally appear to brighten its dark image, but such stories have a short shelf life. The more the government tries to improve the country's image, the more the effort appears contrived and staged for public consumption.

Yet, there is real hope emerging among a new, young and not yet widely known generation of writers who are challenging the fundamental principles of the Saudi religious tradition — namely, dominant Salafist thought. They offer revisionist interpretations of conventional wisdom that promise to inject pluralism into a monolithic worldview long dominated by consent rather than contest. These writers have been invigorated by events across the Arab world during the last three years and have responded to the challenges of a changing political map by producing pamphlets and books in which they articulate new interpretations of the role of Islam in contemporary society. They are not activists, but their ideas circulate among a wide audience, thanks to new media. They publish their books in Beirut, where a Saudi-owned publishing house has been established. Some of these writers are trained in religious studies, while others are aspiring academics and journalists.

The new Saudi writers share a common intellectual cause, which is primarily to deconstruct the religious roots of authoritarian government. They acknowledge that repression can be justified under both secular and religious rule, but in the case of Saudi Arabia, religion provides a much-needed cover for repressive practices ranging from restrictions on freedom of speech and civil society to the lack of political representation, corruption and absolutist rule. These writers do not want a break from Islam, as they remain grounded in its teachings and practices, but they hesitate to raise the banner that says “Islam is the solution.” Instead, they call for something else, something more radical from the perspective of repressive governments.

These Saudis see the solution in the community — that is, the people in all their diversity and unity. One such writer, Abdullah al-Maliki, is a young Hijazi researcher who prefers the slogan “The umma is the solution.” He has faith that the umma cannot be coerced after having recently proven that it is capable of rising up against oppression. He is not under the illusion that the Arab uprisings were motivated by people’s desire to purify religion, Islamize society, ban alcohol or make polygamy legal after being banned (as in Tunisia). The people did not want more Islamic slogans or practices. Rather, they wanted dignity, justice and freedom.

Maliki explores whether in a post-revolutionary era, people should jump at the opportunity to apply Sharia in all aspects of life. Maliki shocked his Saudi Salafist milieu when he argued that applying Sharia should be by choice and not force. He was accused of being a Westernized secularist, a bearded liberal and a misguided scholar. The fierce attack is not surprising, given that Maliki’s controversial thinking touches the foundation of Saudi society: coercion.

Saudi Salafists do not consider the application of Sharia a matter of choice subject to discussion or voting. Maliki, however, sees no merit in applying Sharia by force, as this negates people’s free will and creates conditions for hypocrisy. Sovereignty of the community enables free debate, real consultation and freedom from oppression. These ideas are new in a country where applying Sharia is taken for granted and cannot be a subject of debate. Maliki’s Salafist opponents have accused him of calling for abandoning Sharia rule while in fact he has called only for abandoning coercion in applying it.

Muhammad al-Abd al-Karim is another writer whose main focus is deconstructing the religious roots of repressive government. He is an assistant professor of Islamic jurisprudence at the main religious university in Riyadh, known for upholding the Wahhabi tradition. Al-Abd al-Karim was imprisoned in 2011 after posting a set of provocative questions about the future of Saudi Arabia and succession struggles on his Facebook page. In several books, he longs for a new monotheistic awakening through which men are freed from the oppression of other men. He detests absolute rule and calls for reinterpreting Islamic texts in ways that challenge the dominant Islamic tradition in his country. He criticizes traditional Salafists who prohibit engagement with politics, outlaw activism and deny Muslims the right to challenge their repressive rulers.

Al-Abd al-Karim seems to be disenchanted with Saudi Islamists, especially those who think that educating a society in Islam guarantees a just government. Given that the context in which the education takes place is repressive, it is unlikely that any good will come from preaching Islamic programs and initiatives. Like Maliki, Al-Abd al-Karim does not think that coercion and compulsion make people good Muslims. He criticizes jihadists who seem to be like the rulers they rebel against in the sense that both build their legitimacy on promises to apply Sharia by force. Like Abdullah al-Hamid, a veteran Saudi activist currently serving a long prison sentence for establishing an association for civil and political rights, Al-Abd al-Karim calls for peaceful jihad, a struggle against oppression that relies on civil disobedience, strikes, demonstrations and activism.

It is ironic that the Saudi government and the violent jihadists that the government claims to fight both reject peaceful jihad. The government relies on its supreme religious leader, Sheikh Abd al-Aziz al-Sheikh, to issue fatwas against peaceful mobilization and to in this way intimidate. His fatwas are a stark example of how religion is put to the service of royal power. The government’s Wahhabi-trained judges finish the job by issuing unpredictable prison sentences for peaceful protesters and activists who dare to challenge, albeit peacefully, the repression of absolute rule.

These writers and many others long for a new liberation theology that frees people from political oppression that is deeply rooted in religion. They represent a new generation of Saudi intellectuals who are prepared to challenge Salafist dogma, especially those aspects that have allowed absolute government to pacify society, criminalize civil and political activism and isolate people from the decision-making process. They challenge the meaning of concepts used by official Saudi religious scholars to “domesticate” the population and ensure its acquiescence in showing obedience to rulers and avoiding dissent and chaos.

These Saudis have not abandoned Islam but are searching in its history and interpretations for ways to challenge Saudi Arabia's political stagnation and religious dogma. They all cherish the freedom to discuss and debate openly and reach out to audiences beyond the limited circles of the educated and intellectuals. Yet, they are denied this opportunity as a result of traditional Salafist resistance and the government’s fear of the new discourse they are attempting to propagate. The Saudi government is frightened by these revisionist approaches to religion and their potential consequences, especially if they empower a young generation tired of rehearsing old religious ideas.

If real political change needs an intellectual framework, then this new generation of writers is definitely contributing to the debate that may in the future lead Saudis to endorse a revisionist liberation theology. All they need at this juncture is a group of dedicated activists who can put their ideas into action.