A widespread campaign is being launched in Mauritania by civil-society organizations to combat the growing threat from Islamic fundamentalism, writes Kaci Racelma. 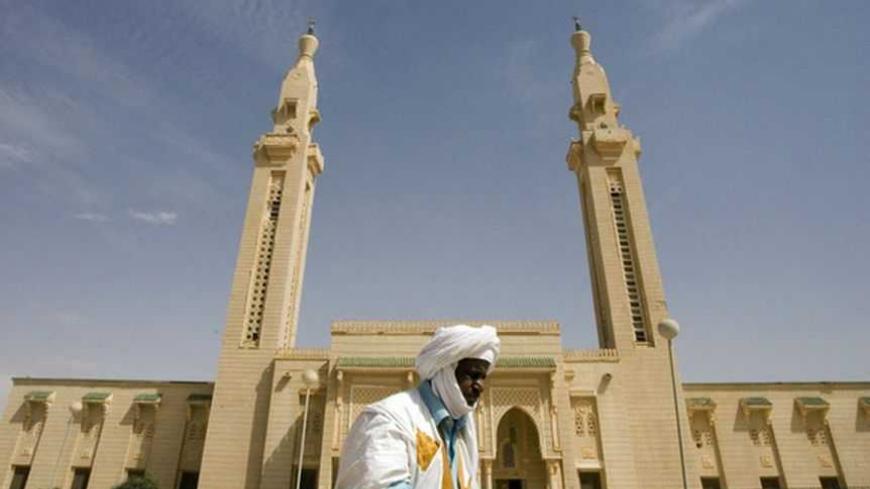 A man walks in front of the Saudi Mosque in central Nouakchott, Feb. 2, 2008. - REUTERS/Normand Blouin

Religious fundamentalism and its zealous followers are failing to find their desired echo within Mauritanian civil society, which is proving to be increasingly deaf and sealed off to them.

Political leaders and heads of associations have recently decided to move against what they see as a "radical and obscurantist ideological movement." Human rights organizations support the leaders in this new mass movement, which is firmly committed to blocking the invasive advance of the Salafist movement in the country of the former Almoravid dynasty.

"We oppose fundamentalism, and we completely reject the idea. This trend is widespread in Mauritania, within parties and in other segments of society," said Ms. Boutrika, who was responsible for a gathering discussing the protection of democracy and human rights in Mauritania.

In this country, which has one foot in the Arab Maghreb and another in the Sahel, religious intolerance began to disproportionately spread in all segments of society. This creates concerns at all levels, hence this initiative to shrink the contours of this intolerance. Two forms of Salafism are threatening society, finding fertile ground in places of worship. The mosques in Mauritania are frequented by faithful people who do not usually have the required level of education and experience to cope with such an invasion. They leave zawiyas (assemblies or groups), where knowledge is limited to the teaching of Islamic law. Thus, the Salafist preachers of the Maliki or Wahhabi schools are finding the desired echo of their doctrine among these faithful people.

In such a situation, the security services are reproached for their shortcomings in facing this threatening progression of a movement that spreads “hatred and division.” Religious fundamentalism, a generator of terrorism and violence, is condemned by the ruling class of the country. A conference has been recently organized to assure that violence has no place in Mauritania. "We have recently organized an international symposium where we highlighted the Mauritanian experience and approach vis-à-vis terrorism and violence," Ahmed al-Mehdi, a senior scholar at the Mauritanian Institute for Strategic Studies (INES) told Al-Monitor in a phone interview.

Fatwas legitimizing jihad or holy war against what they commonly call the "crusaders" also tarnish the nation's religious image, which is grappling with uncertainties at the highest levels of the state. The recent position adopted by civil society associations comes at a very crucial time in the history of the country, which is trying to protect itself from the negative impact of the crisis in Mali. This is an ideal opportunity for associations to stand out from the radical movement that incites hatred and divisions in society.

Thus, several human rights organizations decided to take action and announce their intransigent opposition to the Salafist movement, which is deemed as an element that is totally different from the "social and cultural structure" of the country. In this same perspective, a statement denouncing religious fundamentalism has been made ​​public. In this statement, the organizations in question took the initiative to distinguish themselves from troublemakers and Salafist preachers, whose numbers continue to increase. The Mauritanian League of Human Rights (LMDH), SOS-Esclaves, IRA-Mauritania, the Association of Women Heads of Households (AFCF), Conscience and Resistance (CR), the Mauritanian Human Rights Association (AMDH) and the National Forum of Human Rights Organizations (FONADH) are among the signatories of the denunciation document.

Mauritania's NGOs fiercely oppose the ideology in question, which they consider to go against innovation and freedom of thought. For them, "This world of excellence that mirrors Wahhabi jihadism is only ornamented with bad blocks," whereas Islam is the true advocate of tolerance and peace.

In Mauritania and in other parts of North Africa, the most widespread Salafist trend is represented by al-Qaeda. Its commitment to the principles of original Islam makes its followers, the jihadists, advocate political violence as a Machiavellian way to achieve their ends. By opposing the terrorist action theories that are being conveyed through sermons and media broadcasts, Mauritanian civil society organizations intend to change the face of the country and prove their commitment to human values ​​based on equality between people. Everyone in this country, where Islam is the state religion, condemns these violent acts regardless of their source. They have taken a final stance, in a society where intellectuals and human-rights activists categorically refuse the foundations of these acts.