Whatever happened to the Arab Spring?

Three years on, the old Arab order remains and the democratic transition is still distant. 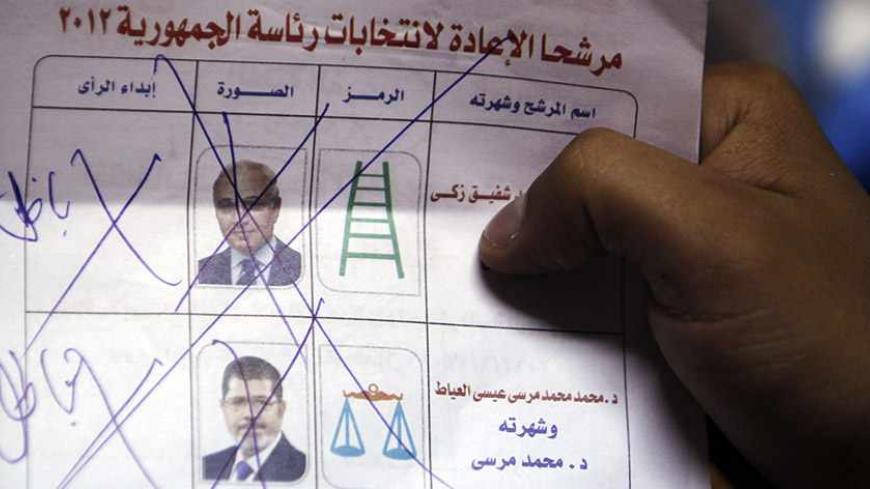 An electoral worker shows an invalid ballot on which a voter has written "void," Cairo, June 17, 2012. - REUTERS/Amr Abdallah Dalsh

Three years after the Arab Spring, the dominant narrative about this region remains articulated in terms of binary opposites: vanishing republics versus resilient monarchies, the secular versus Islamist divide and the Sunni versus Shiite schism.

While not denying the violent manifestations of these opposites, it is time to go beyond the apparent multiple polarizations that conceal a fundamental truth, namely the collapse or near-collapse of an old republican and monarchical order without successfully moving toward a new, stable configuration. Even after three years of protest and bloodshed in the republics and low-level mobilization in the monarchies, the Arab world is still far from shaking off the old order or a stable transition toward something that I would call democracy.

The old political order consisted of either militarized governments ruled by the post-colonial nationalist elite or hereditary dynasties that had been fixed in their positions by departing colonial powers. In both republics and monarchies, ruling classes consolidated as a result of achieving military hegemony, monopolizing economic resources, foreign support and a kind of nationalist or religious legitimacy. In practice, no serious structural differences between republics and monarchies were apparent, for both forms of government exercised power without representation, accountability, transparency or equality.

In both republics and monarchies, the ruling classes became larger but without real attempts to be inclusive or equitable. Rulers tried to liberalize their authoritarian rule, introducing empty quasi-parliaments lacking any power, expanding state bureaucracy to absorb the unemployed and opening up centralized economies in a drive toward a neoliberal market model, whose benefits unsurprisingly went to power-holders and their cohorts, a large coterie with undisputed loyalty. A service economy concealed the reality of crony capitalism and opaque markets, where corruption and nepotism flourished in the absence of legal structures and transparency.

After destroying any viable political society on the left, center and right, there emerged a vacuum which many Arab leaders thought could be filled with vigorous Islamism that focuses on issues such as Islamizing society, returning to God’s law and purifying the landscape of external undesirable values and norms.

As long as this Islamism remained focused on society and its piety, Arab presidents and monarchs thought they were immune from the winds of political change. They tolerated socially conservative trends such as Salafism and oppressed the vocal politicized Islamists, such as the Muslim Brotherhood and its offshoots. In countries like Saudi Arabia, Salafists delivered a society obsessed by its purity, piety and conformity and conducive to perpetuating absolute monarchy. In Egypt, Salafists were seen as a good alternative to the politicized Brotherhood.

All Islamists strove to control their share in the market, promoting a pious capitalism that might guarantee the newly emerging entrepreneurs a place on the political economic map of the Arab world, and now this world was increasingly drawn into global markets by the prospect of profit. Islamizing everything from banks to Barbie, Islamists struggled to have their narrative shape not only societies but also economies. Politics remained elusive, as this domain remained well controlled by the old guard.

At the same time, Arab leaders of all shades nourished their so-called liberal or secular constituencies, in case they needed them in future confrontations with Islamists. This instigated a deep rift between so-called liberal and Islamist constituencies, amounting to an unbridgeable ideological divide that not only affected society at large but was also felt in the sphere of the family. Ideological schisms concealed that the secular-Islamist divide was often a masquerade for deeper economic divisions and competition. In many countries, though secularists and Islamists were trying to win regimes to their sides, those regimes saw no benefit in compromise, for as long as constituencies remained divided, they could play the old game of divide and rule.

The Islamists were not the destiny of the Arab world, but they certainly filled a vaccuum created by oppression and exclusion at a time when liberation from authoritarian rule lacked the language under which it could be pursued. Hence the secular-Islamist divide was important to fragment Arab publics and ensure the persistence of authoritarian rule. From North Africa to the Arabian Peninsula, regimes flirted with Islamism even while they might have appeared to be confronting it. There was a love-hate relationship between the two despite the multiple confrontations. Islamism served important purposes and was only curbed when it became a threat to regimes, not societies.

Equally, neither is the sectarian Sunni-Shiite schism in the dominant narrative about the region an inevitable destiny unfolding in every corner of the Arab world. Yes, sectarian tension and even killing are rife and tend to show their ugly faces in diverse societies such as Syria, Iraq, Lebanon, Saudi Arabia, Yemen and Bahrain. Yet this sectarianism flourished specifically in those corners where either exclusion was entrenched or the regimes themselves were sectarian. Both republics and monarchies co-opted sectarian elites and rewarded them for their loyalty, but continued to exclude the rest of the communities. The regimes searched for token mediators rather than representatives, thus allowing grass-roots sectarian populist entrepreneurs to inflame the imaginations of their followers with utopias of identity politics that promise future emancipation, equality and power. Resisting exclusion from the corridors of power and the economy found a disturbing niche in the language of sectarian identity. Both Sunnis and Shiites adopted the discourse of mathloumiya, historical injustice inflicted on them because of their sect, to the detriment of seeing clearly the roots of exclusion that have grown under authoritarian rule. So sects were either indulged by the regimes in an attempt to use them against political rivals or suppressed to please their wider constituencies.

Negotiating this complex and explosive sectarian terrain proved to lead to cumulative problems that the Arab world is now facing, with no foreseeable chance of going beyond this Sunni-Shiite divide. The divide is not about majorities and minorities, but about authoritarian rule and the political games it entails.

Arab regimes can hardly be described as either Sunni or Shiite. Their loyalty is to members of their families and a circle of loyalists who may or may not necessarily share their faith. These regimes have developed a distorted "secular" logic of their own, nourished by the requirements of ruling over a disenfranchised population that includes both Sunnis and Shiites, not to mention other non-Muslim groups. There is great doubt about their commitment to promoting the interests of their own co-religionists, as their main focus remains on keeping their grip on power and resources. While the piety of presidents and monarchs remains their own business, it is clear that any religiosity they express or resources they spend on religious projects are above all strategies to achieve political ends. Before Islamists fused religion and politics, Arab dictators had already mastered the art. They saw in religion a political capital that could be invested for profit, but this transaction proved in some instances to be drenched in killing and bloodshed. It is no surprise then that those who opposed them used the same old game, namely finding salvation in religion to achieve political and economic ends.

Before we start inventing magical solutions for a region struggling with the outcomes of a crumbling old political order and unequitable distribution of dwindling resources, it is important to identify the real causes that have prevented a movement toward stable politics, let alone democracy. It does not help to continue to recite the set of binary opposites mentioned here.

It has become urgent for the foundation of the old Arab order to be shaken. This does not mean replacing one ruler with another who may turn to be nastier than the previous one. It means a structural change to replace the narrow foundation of government with a wider base that promises both political and economic inclusion. Anything less than this will prove to be futile and prolong the confrontations. Perhaps the Arab uprisings were simply the first round of a marathon that had already started. It can pause, but this marathon is certainly destined to be re-launched in the future. The last three years may be a fourth democratic wave, but all indications point to future ones waiting for their moment.