The Saudi regime needs to tend to internal divisions in the kingdom and scale back its interventionism in the region to improve its prospects for long-term stability. 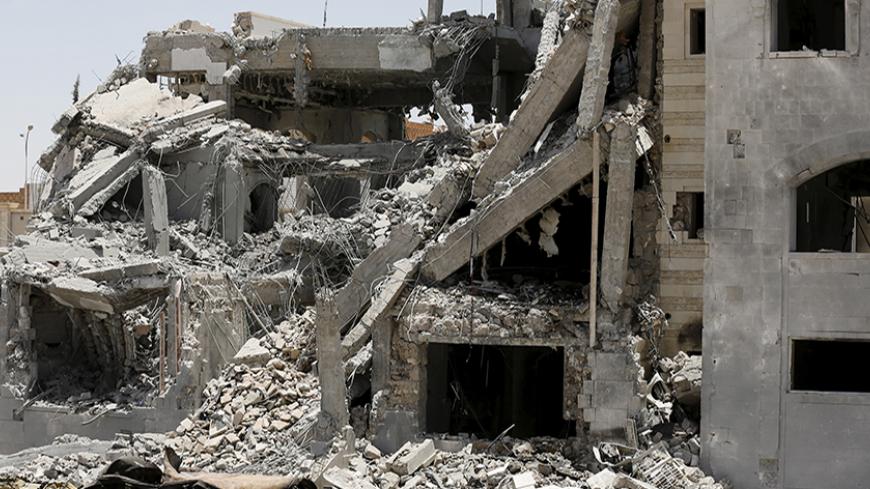 The residence of the military commander of the Houthi militant group, Abdullah Yahya al-Hakim, is seen after an airstrike destroyed it in Sanaa, April 28, 2015. - REUTERS/Khaled Abdullah

After two direct military interventions, one in Bahrain in 2011 and one began in Yemen last month, the Saudi regime appears somehow immune to destabilization in a region torn by conflict and war. The current resilience of the Saudi monarchy variably appears to be a function of the redistributive power of an oil-rich regime, with satisfaction among Saudis with their leadership and external support guaranteed by its Western allies, especially the United States, but there are more relevant factors involved. The regime is currently sustained by the benefits of domestic divisions and regional turmoil.

Saudi society is fragmented, divided along ideological lines that inhibit any quest for national demands for political change and real mobilization. Islamists and liberals trumpet their causes by disagreeing on almost everything from human rights to women driving and their inclusion in state institutions, such as the consultative council.

The monarchy contributes to widening the gap between them by supporting loyalist, official Salafist-Wahhabi Islamism while also patronizing several other Islamist tendencies as well as liberals. In mainstream educational and judicial state institutions, it gives the Islamists a free hand, but in the economic, foreign policy and cultural arenas and the pan-Arab media, the regime enlists individuals with liberal leanings as clients and beneficiaries of its largesse. By placing Islamists and liberals in different niches, it ensures the continuation of its policy of divide and rule. Thus, liberals and Islamists spend most of their time attacking each other instead of working toward a common political reform agenda.

In pitting Islamists and liberals against each other, the regime creates separate platforms for each group, selectively sponsoring them and fueling a war for positions among their adherents. It ensures that Islamists remain dominant in schools and mosques, preoccupying them with teaching pupils Quranic recitations, and in the courts, where they pass severe punishments on transgressors. Meanwhile, liberals are confined to literary salons, where they debate modernity, and dominate television airwaves, defending the regime’s domestic and regional policies, from unemployment benefits to the war in Yemen. Because the two constituencies operate in separate domains, the one is kept from trespassing on the other’s field, but they can still attack each other in an endless competition under the gaze of the regime.

The Islamist-liberal divide is not simply a reflection of an insurmountable difference in vision, but a situation actively sustained by the multiple Saudi princes, who also create separate spaces for competing groups and patronize multiple, often diametrically opposed and politicized nonstate actors. Oftentimes, the princes engaging in this kind of contradictory patronage are themselves seeking client constituencies among the Saudi population to pledge allegiance to them and mobilize to defend them in speeches, articles and other areas of activism.

The Saudi people give the princes legitimacy, while the princes need them to enhance their popularity among subsets of the population. King Salman bin Adbul-Aziz Al Saud had been known to patronize liberal intellectuals at historical research centers and pan-Arab media, but after becoming king, he has been courting Islamists. The war in Yemen seems to have attracted the approval of Islamists opposed to the Shiites. Within hours of announcing Operation Decisive Storm against the Shiite Houthis in Yemen, Islamists proclaimed their support and praised the new king. The war was sorely needed, as it prompted Islamists to back the regime after its new anti-terrorism law had criminalized most of them, notably the Muslim Brotherhood, Sururis and radical jihadi fighters. Surprisingly, the war also unified the liberals and the Islamists, albeit temporarily, against an external enemy for the first time since the Arab uprisings.

The monarchy has been strengthened rather than weakened by the regional turmoil after the initial Arab uprisings, fueled by Saudi financial interventions in Egypt and indirect intervention in Syria and Iraq through proxy actors and rebel groups, sending ground troops to Bahrain and launching military strikes in Yemen. These interventions showcased to Saudis the power of their government, if short term and illusory, and the high cost of political change in neighboring countries. Internal Saudi stability has therefore come to appear inversely proportionate to the regional instability around the kingdom. Violence in these countries has been enough to intimidate local Saudi constituencies and further inhibit the development of the mass protests witnessed elsewhere in the Arab world.

Saudi engagement in the Arab states in the form of oil diplomacy, counter-revolutionary tactics in support of ancient regimes and outright military strikes represent survival strategies meant above all to halt the domino effect of the uprisings. The result has been the intimidation of the Saudi public, which fears the high price of political change.

The latest such intervention is Operation Decisive Storm, which, it was announced April 22, was being put on hold, having achieved its objectives and now giving way to Operation Renewal of Hope for poor and devastated Yemen. Salman badly needed this war to re-establish Saudi Arabia as a regional Sunni hegemon, countering the expansionist policies of Iran. An external war was also needed to silence agitated local constituencies drifting toward heeding the call of the Islamic State farther north, claiming to defend Sunni Muslims against the onslaught of Iranian-sponsored Shiites in Iraq and Syria. Salman was probably worried about competition from the proclaimed caliphate vowing to wipe out the Shiites and other minorities, whom the Saudi Wahhabis had also pledged to confront in the hope of "purifying" Islam of heretics. Saudi Arabia cannot afford to lag behind in this project.

Although the domestic Saudi divides and regional interventions may prove to be important in the short-term stability of the kingdom, in the long term, the Saudi monarchy needs to act along the dividing lines that prevent the Saudi populace from developing national political reform agendas. Refraining from fueling the Islamist-liberal divide could lead the country toward more representative political reform, including power sharing in the form of an elected national assembly. It could also end the almost schizophrenic situation of contradictory social reforms being implemented from above without generating consensus in society. These are resisted by groups that do not agree with their gist, leading to thwarting the changes and subverting the policies from above.

The regime also needs to bring a halt to its external military interventions because they cannot restore order in neighboring countries, in particular Syria and Yemen. Rather, these adventures aggravate polarization, obstruct real political solutions and prolong civil wars.

Domestic divisions and ongoing regional turmoil may prove to be too volatile for the kingdom in the future if they remain unresolved. Such divisions are too dangerous in a region where political and economic grievances are increasingly articulated through violent sectarianism, disintegration of sovereign states and the further fragmentation of the territorial integrity of nations.

The apparent stability of the monarchy five years after the Arab uprisings and its immunity against mass politics and protest may not indicate that it is always good to be king. In the long run, the conditions contributing to stability may equally lead to the antithesis of stability, namely, fragmentation of the Saudi polity itself. The domestic and regional conditions currently helping sustain the resilience of the regime carry the seeds of eventual disintegration of royal authority and are therefore themselves cause for serious concern in the future.

Given Saudi Arabia's importance to the stability of the world economy, its Western allies, mainly the United States, need to be aware of the kingdom's domestic and regional challenges. The country’s stability may not be easily sustainable if its allies remain complacent about its current and assumed prospects for resilience.