How united is the GCC?

While Gulf states may all be united under the Gulf Cooperation Council name, their individual policies on foreign intervention vary greatly. 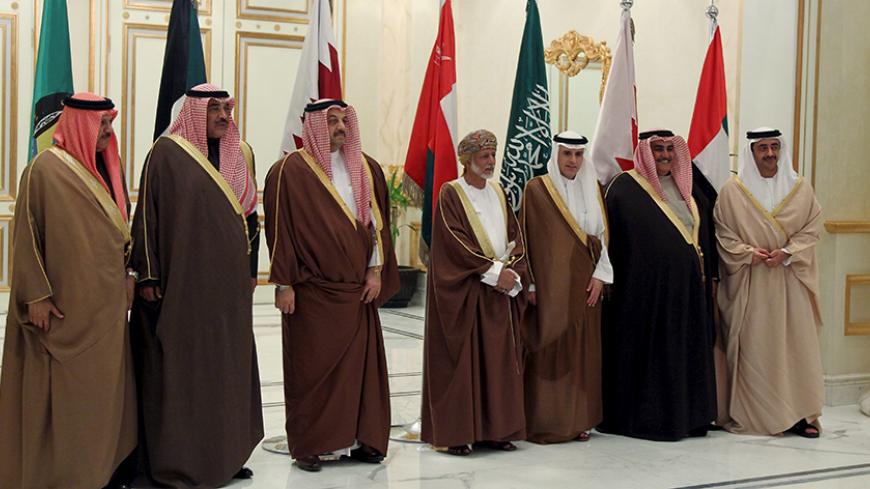 Since the Arab uprisings began in 2010, all six Gulf Cooperation Council (GCC) states have been preoccupied with regime survival, which dictates how they project their power beyond their borders.

When Saudi Arabia, Qatar, the United Arab Emirates, Bahrain, Kuwait and to a lesser extent Oman project power abroad, they are driven by their own domestic challenges rather than by a Gulf consensus. Consequently, GCC countries have adopted contradictory projects in most Arab countries such as Libya, Egypt, Yemen and Syria.

Saudi Arabia and the UAE have been determined to block the rise of the Muslim Brotherhood in North Africa, but until recently Qatar was actively supporting it. With Syria, almost all GCC countries, with the exception of Oman, were keen on supporting so-called moderate rebels, a term that has become increasingly muddled since the Syrian uprising began five years ago. The sectarian agenda of Saudi Arabia and Bahrain — each has a vested interest in depicting its own local protest as an Iranian Shiite conspiracy against it — does not resonate well in Kuwait and Oman.

When GCC states need to project power abroad, they inflame their citizens’ imaginations with hypernationalism, which is highly important at times of regional turmoil, political instability and economic hardship.

The old, mild nationalism that immediately followed the establishment of the Gulf nation-states is developing into an assertive, hypernationalist trend centered on militarization — specifically in the UAE and Saudi Arabia, where both countries project themselves as being at war with an Iranian proxy whose tentacles reach their own backyard in Yemen. In both countries, important royals command the armed forces and are present at all levels in military institutions, thus demonstrating to their subjects that they, too, are willing to die for their nation. Bahrain has no choice but to follow suit, as its fragile domestic politics are stabilized by an entrenched narrative about how Iran strives to destabilize the small kingdom through Bahraini Shiites.

In the Gulf, the sons of kings, emirs and sheikhs are depicted as being willing to die for the fatherland in battle, like ordinary subjects. In this militarized hypernationalism, royalty and commoners become equal in an illusory way, thus masking old hierarchies and inequalities, especially at times of dwindling resources and welfare.

Somehow, hypernationalism is expected to perform the miracle of homogenizing the subjects and molding them into one entity. Above all, this extreme patriotism momentarily promises to bring the fragments of the nation together in an imagined community.

The Gulf states’ contradictory goals in the Arab world may have had a detrimental impact on local societies, widening the divide between Islamists and non-Islamists, strengthening the military against civilian government, creating dependency on Gulf resources and generating new patron-client relations as a result of aid to specific regimes. Those clashing goals may have contributed in one way or another to the rise of militant Islamists across the region. So far, it is difficult to find evidence of recent Gulf expansion leading to positive, long-term democratic government across the region from Bahrain to Cairo, not to mention Syria and Yemen. Regional Gulf interventions can also be devastating at the humanitarian level. Both Yemen and Syria are stark examples of how the Gulf’s aggressive gun policy hasn’t contributed to their stability, but more likely will generate further tensions, conflicts and civilian deaths.

Inside the Gulf itself, interventions abroad have led to several outcomes, all of which have contributed to regime survival, albeit in the short term.

Second, Gulf countries’ interventions in both Syria and Yemen were framed from the very beginning as “decisiveness against Iran.” This immediately appealed to Islamists across the GCC and momentarily absorbed their anger toward their governments’ previous intervention in Egypt.

Islamists increasingly see Gulf countries’ interventions in Syria and Yemen as revenge for the plight of Sunnis in Iraq and Syria. Just before the coup in Egypt, popular Saudi Salafist Mohammad al-Arifi joined other Islamists to openly call for jihad in Syria. A year later, he denied his call. He became an ardent supporter of Saudi Arabia’s war in Yemen, replacing his white cloak with a military uniform to encourage Saudi soldiers on the frontlines.

The intervention in Yemen momentarily healed the rift between governments and Salafists, while keeping the Muslim Brotherhood at bay. In addition to the martial hypernationalism mentioned earlier, we now have a Salafized nationalism, a lethal cocktail of sectarianism and popular nationalism.

From the perspective of many GCC countries, extreme nationalism in its martial and Salafized versions may be the best vaccine at the moment to ward off domestic trouble, especially Muslim Brotherhood challenges. But its long-term, devastating consequences could erupt soon. GCC countries might pay a high price for inflaming the imagination with theatrical hypernationalism — a toll taken on battlegrounds.

Their repression of some Islamists and promotion of others may be a good divide-and-rule strategy, but empowering sectarian Salafists and embracing their agenda is not a long-term solution in countries such as Saudi Arabia and Bahrain. Saudi Arabia already paid a high price for this in 2015 when the Islamic State (IS) claimed responsibility for 15 terrorist attacks on Shiite mosques and other security forces. Kuwait, too, has seen the dark side of this with devastating attacks on Shiite places of worship.

There is a distinct but very thin line separating the Salafists that Saudi Arabia embraces and IS at the level of ideology and practice. The thin line relates to their position on the legitimacy of the Saudi regime. Domestic Salafists outlaw rebellion against the royal family, while IS calls for it. Saudi Salafists write petitions to the rulers, while IS adopts violent strategies. How long can the separation be sustained? For the moment, Saudi Salafists seem to be content with obedience at home and jihad abroad.

As long as the coffers have enough funds to finance GCC interventions abroad that keep domestic dissent under control, GCC countries may survive the current regional turmoil. But economic growth is now stumbling under the pressure of the drastic decline in oil prices. It remains to be seen whether the collapse of oil prices will eventually slow Gulf interventions in the Arab region. More important is the question of whether low oil prices might lead to political consequences in the Gulf itself. When a Gulf country, especially one like Saudi Arabia, ceases to be seen by Salafists as a leader of sectarian wars in support of Sunnis, its own Salafists may drift away from their current support.

Would this revive enthusiasm for jihad abroad that keeps regional conflicts going? It very well might. Would Salafists turn against their own government for lagging behind when it comes to defending Sunni interests and switch from petition to terrorism? If we have learned a lesson from the history of Saudi/al-Qaeda interactions, it is likely that some of the new Salafists will do exactly that.