In an interview, Merve Kavakci-Islam, who was elected to Turkey’s parliament in 1999 but was unable to serve because of wearing a headscarf, said that Turkey is moving toward a “more citizen-friendly, Muslim-friendly, woman-friendly secularism.” 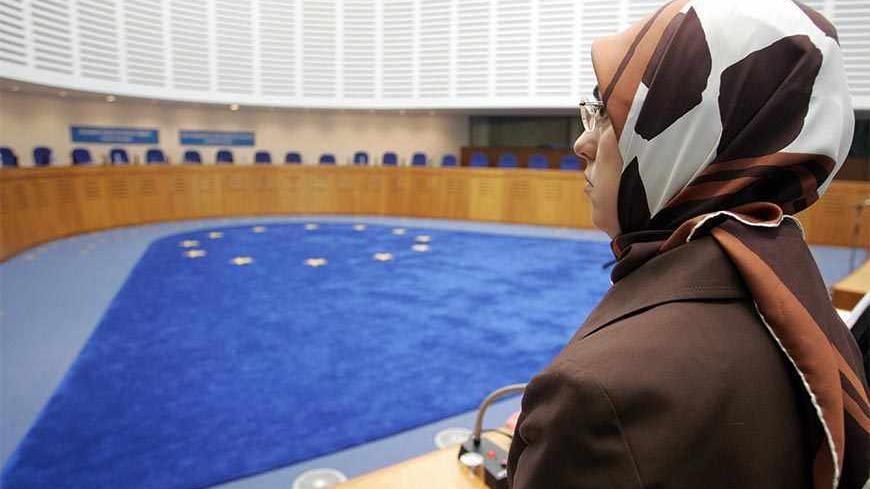 When four women lawmakers wearing the headscarf set a new milestone in Turkey on Oct. 31 by attending parliament’s general assembly, I was in Dallas, in the United States. It turned out that serendipity played a role in my journey to Texas. Not only did I get a chance to meet Merve Kavakci-Islam — perhaps the most central figure in the entire saga of the headscarf ban in Turkey — but also she graciously agreed to answer my questions, which I now share exclusively with Al-Monitor. In 1999, Kavakci-Islam was elected to the Turkish parliament as a deputy, but was never allowed to take office because of her headscarf. Moreover, she lost the right to be a deputy and left the country. She is now a professorial lecturer at George Washington University’s Elliott School of International Affairs.

Al-Monitor:  It is natural that a previously oppressed part of society is now enjoying the newly regained freedoms. Yet, could we from now on expect greater solidarity between diverse women in Turkey on points of common interests?

Kavakci-Islam:  I could very well say, yes, it is indeed possible by looking at our past record. The kind of cooperation and collaboration we do see among Turkish women today was not present three decades ago. In the mid-1990s, we started seeing nascent processes of coming together and trying to get to know the other party. Now, what we see is a better understanding among women than in the past.

We have also seen secular Turkish women defining themselves in a context that is ontologically antithetical to what is "Islamic." After all, that's what the regime promoted for them. As a result for many decades, secular women either opposed the idea of "rights" for headscarved women, or simply remained callous to their sisters' suffering.

Now, we see this changing. Women, to some extent — I prefer to be cautiously optimistic — are able to put their differences aside and work together.

Al-Monitor:  Was this about feminist struggle or between “tradition versus modernity?”

Kavakci-Islam:  We cannot really talk about a feminist movement that developed from the bottom up with the rise of cognizance of women's rights discourse in Turkey. Turkish women who enjoyed citizenship rights were granted by the republic at the outset in the 1920s. Yet, a women's movement was thwarted by the very regime that rendered women equal to men. It was the founding father Ataturk who shut down women's parties twice, namely the women's party and women's league in tandem. The family patriarchal system was substituted with state patriarchy under the republican system.

Hence, women's rights discourse was allowed to progress, so long as the state saw it fit to the extent that it found appropriate. The glass ceiling existed at all times and was preserved by the regime. Women who enjoyed the perks that came with the republican system remained loyal to the system at the expense of turning their backs to the sufferings of other women who did not share the same outlook on life. Furthermore, they rendered themselves soldiers of the republican regime to sequester and ostracize these "other" women. The so-called feminist movement was marred with the secular fundamentalist ideology espoused by the regime. Therefore, what we see today is not necessarily the success of the feminist movement. On the contrary, it is a success gained "despite" the feminists.

Al-Monitor:  What are your views on the allegations that the headscarf is the opposite of women's empowerment?

Kavakci-Islam:  These remarks are inflicted with orientalist values prevalently voiced in the West to stigmatize Muslim women. There is no correlation between lack of empowerment and donning the headscarf. Here, there is an insinuation that Islam must take the blame for all ills of society. Even a cursory reading of Turkish politics could easily refute such arguments.

Al-Monitor:  Safak Pavey, member of parliament (MP) of the main opposition Republican People's Party [CHP], held a speech that was both applauded and condemned. How do you comment on her remarks that “the girl wearing a headscarf with a floral pattern and in a pair of tight jeans making out with her boyfriend in the park owes her freedom to do so to Ataturk”?

Kavakci-Islam:  There are two aspects of this statement that reverberate with the realities of the Turkish context, thus deserving an explanation. First is the conceited attitude internalized by the CHP as the creator of the top-down modernization project that was put into play by duress. The process did not resonate with a sizable part of the population, and gave way to a growing chasm between secular fundamentalists such as the ones we see in the CHP and the rest of the population who have religiously and culturally based sensitivities. As a result, a society comprised of binary oppositions emerged. This statement speaks to that demarcation of the White Turk up against what is known to be described as the Black Turk. The conceited, sarcastic and belittling underlying tone stems from the emphasis on that inherent demarcation.

Second, the urge to connect all actions, all roads so to speak, to the founding father Ataturk epitomizes the taboo-ish nature of the secular fundamentalist regime.

Al-Monitor:  Whether in floral pattern, tight jeans or decolletage, women are continuously judged for having “loose morals” based on their sexuality. Why?

Kavakci-Islam:  Women and pertinent issues such as their bodies, appearance, rights and the like have long been utilized in the construction of national identities in the making of countries. Turkish women are no exception to the rule. The independence war assumed a project to salvage the "motherland" with the women who were under the attack of the "infidel West." In the aftermath of the republic's founding, women were positioned at the very center of the modernization project. The quasi success of the project was measured with the appearance of the secularized Turkish women. The secular appearance accounted for the facade of the project. That is to say, regimes, governments and politics always benefit from bringing women to the discourse, wherever the discourse might take place. The fact that all of the aforementioned areas are male-dominated realms contributes to why that is the case.

Al-Monitor:  Would you agree with the critics that “chastising the headscarf-wearing girl for kissing her boyfriend is equally misogynistic, patriarchy-affirming and anti-woman?”

Kavakci-Islam:  Indeed, it is misogynistic. In CHP ideology, women merely serve the reproduction of the value systems that create further chasm between men and women. But, what is important here, I believe, is to note that by espousing a patriarchy-affirming and anti-woman stance — as the critics suggested — CHP women do what they always do, that is, seek refuge in the very arms of the regime that provide them with the distinction and recognition they need to "define" themselves as the "success" story of the republic, in return for their loyalty.

Al-Monitor:  How would you comment the impact of the headscarf ban on today’s low labor force participation rate of women in Turkey?

Kavakci-Islam:  The fact that the republican regime embraced a state patriarchy to control women's activities played a major role in low female participation in the workforce. The headscarf ban also exacerbated the plight of women. In Turkey, 70% of women wear the headscarf, and to keep them out of the public realm was a disservice to the country's economy. The state shot itself in the foot by not utilizing this large portion of the female population by integrating them into the system.

Al-Monitor:  Is secular Turkey in danger?

Kavakci-Islam:  Secular Turkey is not in danger. Secular fundamentalism is in danger. Embracing headscarved deputies in parliament is only an example of rectification of the convoluted form of Turkish secularism. We are now, I believe, moving toward a more citizen-friendly, Muslim-friendly, woman-friendly secularism, similar to that of the US take on separation of church and state.

Al-Monitor:  How do you see MP Ruhsar Demirel’s [Nationalist Movement Party (MHP)] remarks that the state needs to be less involved in everyone’s lives?

Kavakci-Islam:  We have a meddlesome state that pries into every facet of our lives. Unfortunately, this is the legacy bequeathed from CHP tradition. It will take a long time to take the state out of our lives, since it is embedded in our political culture. Yet, recent developments and looming constitutional changes give us hope. Though we must recognize that we have a long way to go.

Headscarved women were only one part of the population with demands of change. The needs met of other groups must follow suit in the discourse of change.

Al-Monitor:  In that light, a final and important question. As someone who has been the victim of oppression and violation of fundamental human rights, would you equally and ardently defend the freedom of the lifestyles of secular parts of the population, who obviously share values different from yours?

Kavakci-Islam:  Indeed. What they have done to us, I am not going to promote we do to them. Everyone deserves to live with human dignity. I cannot take that for granted.

On that note, after hearing Kavakci-Islam's view, it is worth remembering that Turkey’s society has always been multifaceted, so not all secularists are necessarily CHP supporters, or support all of its policies. Nor do all pious Muslims in Turkey support the Justice and Development Party, or every action of its leadership.

Acknowledging, as Kavakci-Islam claims, the right for each person to live according to his or her choices — regardless of our personal approvals and without state interventions — is a fundamental need for Turkey. This is a key lesson that the religious conservatives who are now in power also need to be reminded of.