The end of headscarf restrictions in Turkey will deprive the Justice and Development Party of the “victimhood” narrative and further expose the party’s authoritarian leanings. 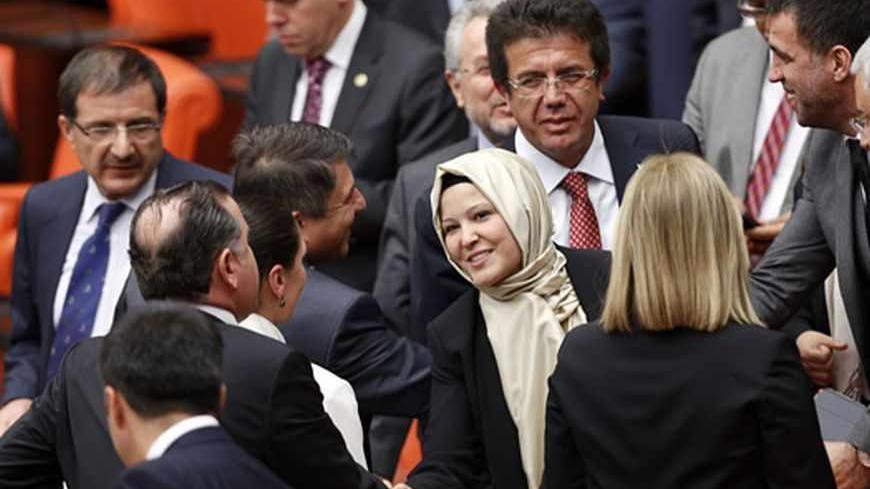 Turkey's Justice and Development Party lawmaker Nurcan Dalbudak is congratulated by her colleagues as she attends the Turkish parliament general assembly wearing her headscarf, in Ankara, Oct. 31, 2013 - REUTERS/Umit Bektas

Turkish politics crossed a major threshold on Oct. 31 when four women lawmakers wearing the headscarf attended parliament’s general assembly. Nurcan Dalbudak, Gonul Sahkulubey, Sevde Beyazit and Gulay Sabanci — all members of the ruling Justice and Development Party (AKP) — had decided to cover their heads while performing the hajj pilgrimage recently and announced that they would attend parliament with their hair covered thereafter.

The event may seem of little significance to the outside world unfamiliar with the scale of Turkey’s polarization, but it marks both the end of an era and the onset of fresh developments for Turkish politics.

Although as many as 61% of Turkish women cover their heads, veiled women were barred from public service until very recently. Until several years ago, they were barred also from enrolling in both public and private universities and could not enter any military facility — even if they were the wives of presidents and prime ministers.

Until Oct. 31, it was out of the question for a veiled woman to serve as a member of parliament. Memories were still fresh of the treatment accorded to Merve Kavakci, a veiled lawmaker from the now defunct Virtue Party (FP), at the parliamentary oath-taking ceremony in May 1999. “This is not a place to challenge the state. Please, put this lady in her place!” then-Prime Minister Bulent Ecevit called as noisy protests from the benches of his Democratic Left Party (DSP) forced Kavakci to leave parliament without being sworn in. Kavakci was then stripped of her parliamentary seat and Turkish citizenship on the grounds that she had simultaneously held US citizenship.

Kavakci’s “audacity” to come to parliament wearing a headscarf not only put a dramatic end to her political career but also became a key argument for the Constitutional Court when it outlawed the FP two years later. Those were times when a veiled woman’s appearance in the public realm was considered to be a breach of the principle of secularism on which the Republic of Turkey was built.

The military and bureaucracy maintained their anti-headscarf attitude for a long time after the AKP came to power in November 2002. President Abdullah Gul’s wife Hayrunnisa, for instance, was not invited to a single reception the military held from 2003 to 2007, when Gul served as deputy prime minister and foreign minister.

The AKP has been gradually abolishing the headscarf restrictions. The ban in universities was lifted in 2011, while the “democratization” package unveiled on Sept. 30 allowed women to wear the headscarf in public service, barring three sectors — the police, military and judiciary.

The process culminated in parliament on Oct. 31, when the four veiled lawmakers were able to attend the general assembly session without any tensions, ushering Turkey into a new era.

In light of recent developments, the end of the headscarf ban is likely to have an impact on political and social developments in Turkey in the near future.

First, the AKP government will be deprived of a major political tool. Though it has been in power for a long time, the AKP has claimed that its governing power is being inhibited by the military and bureaucracy, an argument that was justified to a certain degree until three or four years ago. The military’s clout has almost been fully removed, but the AKP has continued to use the argument of “being in power but not wielding power.” The main justification for that argument was that public service and parliament remained off-limits to veiled women. The AKP has always portrayed itself as the representative of Turkey’s religious-conservative tradition that the Kemalist-military regime oppressed. The image of a conservative party “victimized” by the Kemalist regime has been one of its primary political weapons.

Now that veiled lawmakers are able to attend parliament, it has virtually become impossible for the AKP to continue using the “victimhood” narrative. The presence of veiled women in parliament is a testament that the AKP is the sole, uncontested holder of power. As a result, the authoritarian leanings the AKP has displayed will be further exposed and criticism of its practices will toughen.

The main opposition Republican People’s Party (CHP) is not in an easier situation. Thanks to great efforts by Chairman Kemal Kilicdaroglu, CHP members held back from protesting the arrival of veiled lawmakers in parliament. Yet, the issue is known to have sparked much bickering within the party. The CHP’s neonationalist-Kemalist wing reportedly advocated a tough reaction to the veiled lawmakers, while the social democrat camp argued that the headscarf was a matter of individual freedoms and that any protest would tarnish the party’s image. With the chairman exerting his authority, the in-house “headscarf crisis” appears to have settled for now.

The bickering, however, demonstrates that the political rift within the main opposition party has reached an unmanageable scale. The CHP’s neonationalist wing had raised strong objections also to reforms addressing the grievances of non-Muslim minorities and, most recently, to the removal of some restrictions on the use of the Kurdish language. The social democrat wing, meanwhile, openly backed the reforms. The headscarf crisis has reignited the debate on how the two wings could continue to coexist. Their estrangement is now likely to accelerate.

The end of headscarf restrictions is probable to also have major social ramifications in the conservative religious segment of society. As the number of working women in those quarters increase, the budding Muslim feminist movement is likely to gain strength.

In sum, the end of headscarf restrictions appears poised to make an impact on many social and political issues in Turkey. The arrival of four veiled women in parliament is likely to be regarded as a “milestone” in the future.