When Israel completes the construction of its eastern fence, it could finally declare itself a well-fortified stronghold in the heart of the Middle Eastern jungle. 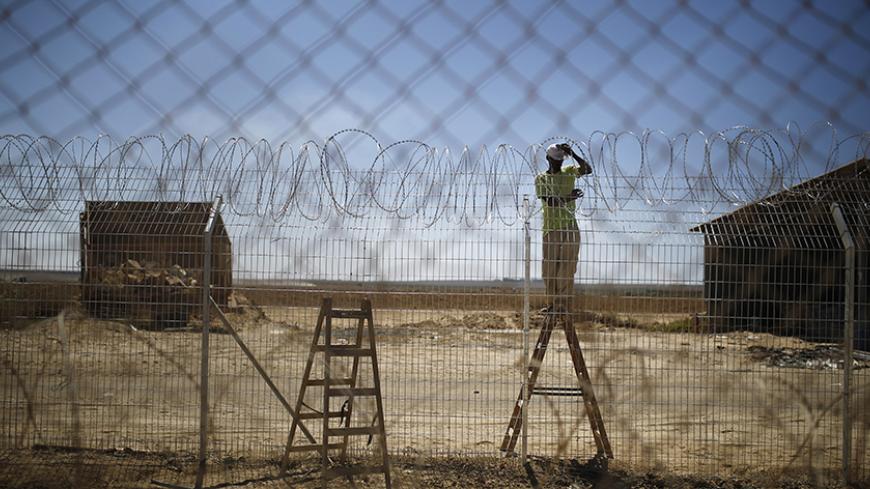 An Israeli worker repairs a fence damaged by a tank in Kibbutz Nahal Oz, just outside the northern Gaza Strip, Sept. 3, 2014. - REUTERS/Amir Cohen

Knesset member Isaac Herzog, head of the Israeli opposition, never imagined the furor that would result from comments he made during an interview in Tel Aviv on Sept. 5. Herzog called on Israel to absorb Syrian refugees, saying, “I spoke with a senior member of the Syrian opposition, now in exile in Europe. The Syrian opposition has very harsh claims about what is happening around the world today. … Jews cannot be apathetic when hundreds of thousands of refugees are searching for safe haven.”

Herzog’s remarks spread quickly and evoked fierce responses. Almost all of the Likud’s ministers attacked him sharply for his comments. Even Prime Minister Benjamin Netanyahu jumped into the fray by portraying Herzog as having no commitment to Israel’s security, integrity or Jewish character. At the start of last Sunday’s Cabinet meeting, Netanyahu declared, “Israel is a small country, a very small country, that lacks demographic and geographic depth; therefore, we must control our borders against both illegal migrants and terrorism.”

The Zionist Camp was quick to respond. They immediately released a statement saying that late Likud Prime Minister Menachem Begin, who agreed at the time to absorb refugees (the boat people) from Vietnam (1977-79), “is turning over in his grave.”

These sharp exchanges continued throughout most of the week against the backdrop of the heart-wrenching photo of the dead Syrian toddler Aylan Kurdi, which sent shivers throughout the entire world, including Israel. The debate over the Syrian refugees now flooding Europe underscored yet again the immensity of the chasm separating Israel’s two political camps. The right has long isolated itself and is now manning the barricades in the modern citadel that is the new Israel. In contrast, the left tries to cling to more liberal, humane values, while trying to connect to the country’s natural environment in the enlightened world.

In his defense, Netanyahu says that Israel is trying to help its neighbors and the surrounding region at large on the humanitarian level. A military hospital has been set up in the Golan Heights to treat hundreds of wounded Syrians, who arrive there in droves from those areas where the Syrian army is fighting the rebels. Israel does not check the identities of the wounded, and some of them are even transferred to hospitals within Israel for further treatment. They are returned to Syria only after they have recuperated. Similarly, Israel is trying to help the African states that have volunteered to absorb migrant workers who entered the country illegally. Israel is prepared to donate its means, experience and input, in a limited sense at least, but it is firmly opposed to absorbing refugees.

“Refugee” is a very volatile term in Israel, given the historic Palestinian demand that refugees from the War of Independence (1948) and the Six-Day War (1967) be allowed to return to their homes. Acceding to that demand would lead to the demise of the Jewish state. Of course, this conflicts with the fact that the Jewish people have been refugees throughout much of their long history. No people apart from the Jews have wandered the world for 2,000 years of exile, after being expelled twice from their homeland.

As fate would have it, while the country’s internal debate was raging Sept. 6, Israel began its “historic” work on a sophisticated, modern fence along its eastern border with the Kingdom of Jordan. This is the last of Israel’s borders not demarcated by a sophisticated fence. The stretch of border, running 235 kilometers (146 miles) from the southern town of Eilat to the Judea Desert site of Masada, is Israel’s last unenclosed frontier. Towering fences equipped with advanced warning systems, cameras, sensors and many other high-tech systems, block all of its other borders. These broadcast directly to local war rooms, which are designed to offer a rapid response to any possible infiltrators.

Once this last fence is completed, Israel can finally declare itself a well-fortified stronghold in the heart of the Middle Eastern jungle. It is certainly symbolic that this historic project will be completed when the fence reaches Masada, the ancient fortress rising over the Judean Desert where the last Zealots (anti-Roman rebels) to survive the Great Revolt against Rome (67-70) held out. It is also where they chose to take their own lives, so as not to surrender to the Roman Empire.

The work now underway focuses on the first 30 kilometers (19 miles), running northward from Eilat along the Arava Highway. The purpose of this wall is to protect the new airport that Israel is building there. Once this is completed, the next stretch of the project will be planned and budgeted, until a completed fence finally reaches Masada. From there northward, there is already an advanced security fence in place, stretching all the way to the triple border of Israel, Syria and Jordan. This fence is so sophisticated that it picks up even the slightest touch. The Golan Heights fence was completed only recently in response to a decision by former Israel Defense Forces Chief of Staff Lt. Gen. Benny Gantz. He decided to upgrade Israel’s state of preparedness along the Golan Heights in response to the Arab Spring and the war in Syria. The Israel Defense Forces re-evaluated the situation, redeployed on the Golan Heights and improved the forces stationed there, as described in an Al-Monitor article.

The border fence between Israel and Lebanon, which stretches westward to the Mediterranean, is known as the Blue Line. The entire stretch is properly fenced and backed up with natural obstacles, which Israel has elevated and maintains. The only one of Israel’s borders that does not need a fence is its western boundary, stretching from Lebanon to the Gaza Strip, because it is a maritime boundary.

The Gaza Strip is surrounded by an endless network of fences and fortifications, intended to prevent Hamas and Islamic Jihad terrorists from entering Israel. East of that lies Israel’s long border with Egypt. This was an open border for decades until Netanyahu decided to construct a tall fence along it, too. Completed only recently, the new fence has succeeded in frustrating waves of illegal migrants seeking work, who had been infiltrating Israel from Africa. A ghetto of 60,000 such migrants now exists in southern Tel Aviv. It constitutes a social and demographic time bomb, with which Israel is having a hard time dealing.

For anyone who has forgotten, the concept of a fence isn’t limited to the borders of Israel proper. After the outbreak of the second intifada and in the wake of Operation Defensive Shield (2002), Israel constructed its famous separation fence, which winds through the center of the country, just east of the Green Line that separates Israel in its (internationally) recognized borders from Judea and Samaria. This fence was built with considerable effort in a relatively short time. It was originally intended to prevent waves of Palestinian suicide bombers from gaining easy access to Israeli population centers in metropolitan Tel Aviv and along the Coastal Plain. The fence achieved this purpose. It continues to wind through the heart of the country, from northern Samaria to the southern part of the Judean Desert. It is a silent monument to an alternative border, which could have separated Israel from a Palestinian state that has yet to be established.

Now, as aforementioned, the circle is being sealed in the east. Israel is investing considerable thought and enormous energy, resources and funding into keeping the country isolated from and unsoiled by the hellscape beyond its borders, if not completely sterile.

This strategy has worked until now, at least relatively. Every so often, there is a trickle of poorly aimed mortar shells originating in the conflict between the rebels and President Bashar al-Assad’s Syrian forces in the Golan Heights. Similarly, Gaza erupts about once every two years, with a dribbling of rocket fire here and there as a matter of course. The border with Lebanon is very tense, but it has been relatively quiet since the Second Lebanon War (2006), and all in all, life is rather tranquil and calm. The Arab Spring, which became a brutal winter, has caused Israel to speed up its process of seclusion and self-isolation.

The good news is that the bloody wars being waged across the Middle East prove Israel’s claim that it is not the cause of the regional instability. The bad news is that life has become a lot less certain, state frameworks are disintegrating, enemies are becoming a lot less predictable and a lot more violent, and no one can tell what tomorrow might bring. Given this situation, all that is left for Israel to do is to raise its fences and hope for the best.