Russia not backing down on Assad 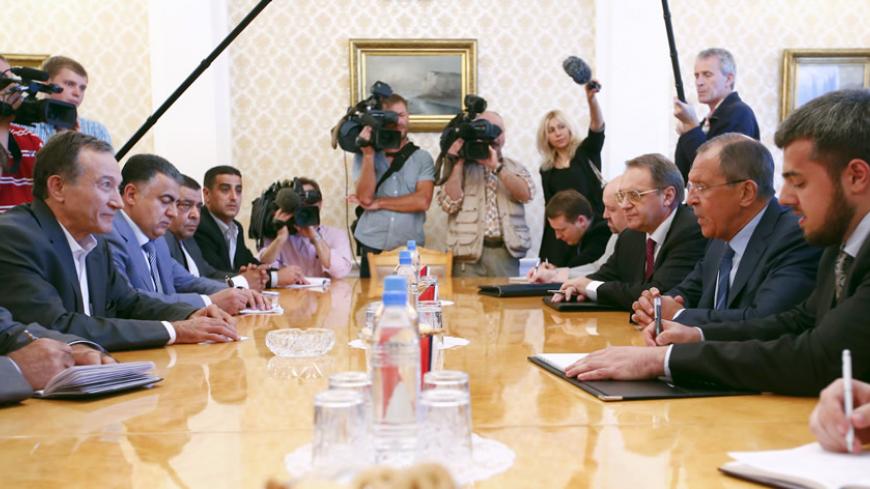 Russian Foreign Minister Sergey Lavrov (2nd R) attends a meeting with a representative of the Syrian opposition Haytham Manna (L) and other members of the delegation in Moscow, Aug. 14, 2015 - REUTERS/Maxim Zmeyev

Russia ramps up in Syria

US Secretary of State John Kerry warned Russian Foreign Minister Sergey Lavrov on Sept. 5 that a Russian military buildup in Syria “could further escalate the conflict” and even risk confrontation with US-led coalition forces.

Moscow’s ramping up in its support for the Syrian government is the latest iteration of a remarkably consistent approach to Syria since the beginnings of the uprisings and civil war in 2011. For Russia, Syrian President Bashar al-Assad, or more accurately the Syrian government, is essential to defeat terrorist groups that directly threaten Russia.

As Lakhdar Brahimi, the former joint United Nations-League of Arab States special representative for Syria, told Al-Monitor last year, “I think the Russian analysis was right at the beginning, but everybody thought that it was an opinion and not an analysis. The Russians were saying that Syria is not Egypt and it is not Tunisia, and the president of Syria is not going to fall in a matter of two or three weeks. People thought that this was not an analysis, it was an expression of position: 'We are going to support this regime.’ … Maybe, maybe if people listened to them, and went to them, and said, listen you clearly know the situation in Syria better than anybody else. Let’s sit down and see how we can help Syria solve its problems. Perhaps things would have been different. But that did not happen.”

US and international diplomacy on Syria is otherwise “stuck,” as Laura Rozen reports, tripped up by the US, Saudi, and Turkish precondition for Assad’s departure in any political transition. With the United States on the diplomatic sidelines, Moscow’s engagement with the Syrian government and opposition groups has complemented the efforts of UN Syria envoy Staffan de Mistura. Moscow and Tehran are not backing down on Assad, especially as a precondition and in the absence of any coherent political plan that would assure the defeat of the Islamic State (IS) and avoid the collapse of the Syrian state.

Vitaly Naumkin explains the Russian rationale for increasing its support for the Syrian government: “It is well-known that Russia has been calling for the formation of a broad coalition with the participation of global and regional powers to wage war against this evil, which Russia regards as a direct threat to its national security. Suffice it to say that from one single area in the Volga region, which is famed for its tolerance, no fewer than 200 people have already left to fight on the side of IS. This is to say nothing of the North Caucasus. The task of forming such a broad coalition is still far from being fulfilled. … The moderate Syrian opposition forces, which are leading the fight on two fronts, are much weaker than the terrorists and are losing ground. According to Russian experts, the opposition controls about 5% of Syria’s territory, while almost half of the country is in the hands of IS. Under these circumstances, assistance to Damascus is viewed exclusively in the context of its struggle with the jihadists.”

Naumkin, who has participated in the Moscow-brokered talks between the Syrian government and opposition groups, points out that the Russian public remains opposed to direct military intervention in Syria, and that Moscow and Tehran are not necessarily coordinating their approaches to Syria, at least not yet: “One shouldn’t link Moscow’s plans to continue providing assistance to Damascus to Tehran’s plans. Iran is pursuing its independent policy toward the Syrian crisis, guided by its own national interests. Russia is doing the same, while also taking into account its developing relations with the Arab Gulf states. But could it be that the scale of the fight against IS in Syria will expand without the creation of a broad coalition of regional and global players, and even the necessary coordination — a fact that can only hinder success in this struggle?”

US leaders rally to pope’s call to offer "concrete hope"

The Barack Obama administration has taken the charge from Pope Francis’ appeal to offer sanctuary and hope to refugees by announcing that the United States will increase the number of Syrian refugees it will accept from 1,293 so far this year to 10,000 next fiscal year, while increasing the overall number of refugees to 70,000, as Julian Pecquet reports.

Francis’ appeal Sept. 6 to European Catholics to welcome the refugees as “neighbors” represents perhaps the most meaningful moral challenge to date of the 21st century, as well as a historic gesture of interfaith relations at a time of crisis in the Islamic Middle East.

Pecquet reports that many US politicians, including House Minority Leader Nancy Pelosi, D-Calif., Sen. Patrick Leahy, D-Vt., and Democratic presidential candidate Hillary Clinton, have endorsed the pope’s call to do more for the nearly 400,000 refugees, more than half of them from Syria.

There are of course those in the United States and Europe who prefer to see the refugees as a threat because of their religion, rather than an opportunity to express compassion.

This column reported last week that the globalization of the Syrian refugee crisis is a shared burden that should be embraced by all countries, including the regional parties to the Syrian conflict, whose leaders have an obligation to provide “inspiration, hope and goodwill,” rather than arms and intrigue.

Akiva Eldar and Ben Caspit report that the refugee crisis has touched a political nerve in Israel, sparked in part by remarks by Knesset member Isaac Herzog, head of the Israeli opposition, that “Jews cannot be apathetic when hundreds of thousands of refugees are searching for safe haven.”

Eldar writes that Israeli Prime Minister Benjamin Netanyahu comes up short in dealing with the refugee flows from African and Arab countries. He explains Israel’s special obligation with regard to Syrian refugees in particular: “Few recall that Israel’s connection to Syrian refugees is closer than that of any other country. During the 1967 Six-Day War, 115,000-120,000 Syrians left their homes in more than 200 villages across the Golan Heights. According to Syrian birth rate statistics, the number of Golan Heights' refugees and their descendants has reached about 500,000 today. Most of the villages were completely destroyed and were replaced by Israeli settlements, although according to UN resolutions, even now the Golan Heights is considered Syrian territory. One can assume that thousands from among some 4 million Syrians who have found refuge in Turkey and Jordan or those who are wandering around Europe are Golan Heights refugees or their descendants. If little Israel is too small to take in several thousand families from among the 1967 refugees who have now lost their homes for a second time, why not let them settle in the West Bank, as suggested by Palestinian President Mahmoud Abbas? Netanyahu has promised in any case that a Palestinian-Arab state will be established there, and he has to be taken at his word. After all, it’s just words.”

Caspit writes, “In his defense, Netanyahu says that Israel is trying to help its neighbors and the surrounding region at large on the humanitarian level. A military hospital has been set up in the Golan Heights to treat hundreds of wounded Syrians, who arrive there in droves from those areas where the Syrian army is fighting the rebels. Israel does not check the identities of the wounded, and some of them are even transferred to hospitals within Israel for further treatment. They are returned to Syria only after they have recuperated. Similarly, Israel is trying to help the African states that have volunteered to absorb migrant workers who entered the country illegally. Israel is prepared to donate its means, experience and input, in a limited sense at least, but it is firmly opposed to absorbing refugees.”

Nonetheless, Israel considers the refugee crisis as mostly connected to the broader security challenges it faces in the Middle East, and priority is given to building a fence. Caspit concludes: “The good news is that the bloody wars being waged across the Middle East prove Israel’s claim that it is not the cause of the regional instability. The bad news is that life has become a lot less certain, state frameworks are disintegrating, enemies are becoming a lot less predictable and a lot more violent, and no one can tell what tomorrow might bring. Given this situation, all that is left for Israel to do is to raise its fences and hope for the best.”