Netanyahu is all talk and no action when it comes to helping refugees, asylum seekers

In reaction to the flow of Syrian refugees, Israeli Prime Minister Benjamin Netanyahu talks about “empathy for a human tragedy,” but when it comes to actions, as in the case of the Gaza Strip or the asylum seekers from Africa, he turns his back. 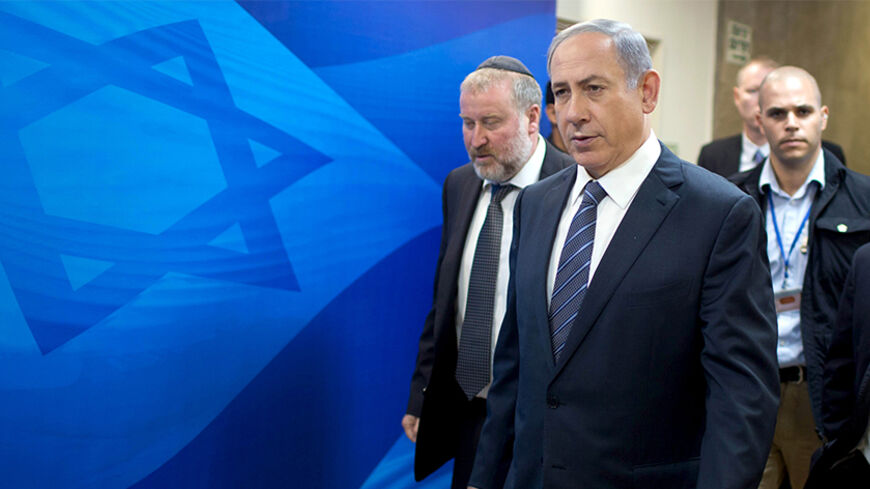 Israel's Prime Minister Benjamin Netanyahu (R) and Cabinet Secretary Avichai Mandelblit (L) arrive at the weekly cabinet meeting in Jerusalem, Sept. 6, 2015. Netanyahu said Israel could not afford to take in refugees fleeing the war in neighboring Syria and vowed to surround Israel with security fences on all its borders. - REUTERS/Menahem Kahana

Perhaps it was the association conjured up by the photo of a Czech policewoman inking a number on the arm of a small boy that broke the silence of Israeli politicians. Perhaps the photo of the Syrian infant’s body washed ashore in Turkey was what moved the debate out of its narrow confines between the left-wing Meretz Party and the Joint List of predominantly Arab parties. “Jews cannot be apathetic when hundreds of thousands of refugees are searching for a safe haven,” declared Zionist Camp leader Isaac Herzog Aug. 5. He added, “Our people experienced firsthand the silence of the world [referring to the Holocaust] and cannot be indifferent in the face of the rampant murders and massacres taking place in Syria.” Opposition leader Herzog was not content with just preaching and called for Israel to take in Syrian refugees “in a supervised manner.”

Prime Minister Benjamin Netanyahu’s reaction was not long in coming. At the start of the weekly Cabinet meeting the following day he said, "Israel is not indifferent to the human tragedy of the refugees from Syria and Africa.” Netanyahu boasted of the fact that Israel had tended devotedly to some 1,000 Syrians wounded on the war front and helped them rehabilitate. Nonetheless, he was quick to add, “Israel is a small country, a very small country that lacks demographic and geographic depth; therefore, we must control our borders, against both illegal labor migrants and instigators of terrorism.”

Indeed, Israel is a small country. But there are small countries that don’t make do with treating 1,000 injured people. According to data supplied by the Knesset’s Research Center, at the end of 2013, there were 6.9 refugees and asylum seekers for every 1,000 residents of Israel. This compared with 151 per 1,000 in Latvia, 94.3 in Estonia, 21.4 in Malta, 12.6 in Sweden, 10.79 in Norway and 9.02 in Switzerland. Many months before the massive storming of European states by the refugees from Syria and Afghanistan, the rate of asylum seekers in Austria was 8.8 per 1,000, in Germany it amounted to 8.3 and in Luxembourg to 8.06. In Israel, on the other hand, only nine of more than 7,000 asylum applications filed with the state between June 2009 and February 2015 have been accepted. Most of the applications were not even considered.

During a highly publicized visit Sept. 6 to the Jordanian border — designed to announce the construction of a fence along Israel’s eastern border — Netanyahu stressed that despite the fact that Israel is surrounding itself with walls, “This is not to say that we do not empathize with the human tragedy around us.” Netanyahu was probably not expressing empathy for a human tragedy taking place far closer to home, just around the corner, for which Israel is chiefly responsible — the Gaza Strip. A UN report issued several days ago warns that if Israel continues to blockade Gaza, within five years it may be rendered “unlivable.” The report by the United Nations Conference on Trade and Development further stated that Operation Protective Edge in July to August 2014 resulted in the displacement of half a million people from their homes, “leaving Gaza ravaged.” Unemployment has reached a record 44% of the workforce, and 72% of households suffer food insecurity. By the way, Herzog, who displays sensitivity to the plight of the Syrian refugees, did not react to these serious numbers.

It is highly unlikely that when Netanyahu talked about “empathy for a human tragedy” he was thinking of the 45,091 asylum seekers in Israel (according to the data of the Population and Immigration Authority updated to the end of June), most from Sudan and Eritrea. Those whom he terms “infiltrators” are hounded and thrown into a detention camp, dubbed the “Holot facility.” Until recently, its residents were under orders to report to authorities of the facility for three daily roll calls, which were reduced by court order to one roll call, and at night they were locked inside. Since the beginning of the year and until the end of June, 1,382 desperate “infiltrators” have left Israel “voluntarily,” having gotten fed up with the hospitality at the Holot facility built for them in the south.

Following a petition filed by human rights organizations with the Supreme Court, 1,178 asylum seekers were released from Holot at the beginning of September, after being held there for over a year. The Population and Immigration Authority is expected to fill the vacated slots with new asylum seekers. Holot can house 3,360 people. Under orders issued by Interior Minister Silvan Shalom, those released are banned from living and working in Tel Aviv and Eilat, the two cities where most asylum seekers have found employment and housing solutions.

The mayor of Beit She’an, Rafi Ben-Sheetrit, also displayed “empathy” for the tragedy of the African asylum seekers. In a letter to the immigration administration and to the town’s police chief, he called for “immediate action against the desperate infiltrators who have found shelter and a safe haven in Beit She’an.” The mayor of Arad, Nissan Ben Hamo, instructed the teams of municipal inspectors to beef up their forces at the entrance to town in order to prevent asylum seekers from entering. Hundreds of detainees who were released from Holot were sent away destitute (they were given 64 Israeli shekels, about $16, for the bus fare), finding refuge in public parks or crowding into decrepit apartments rented by friends. Herzog was silent this time, too.

Few recall that Israel’s connection to Syrian refugees is closer than that of any other country. During the 1967 Six-Day War, 115,000-120,000 Syrians left their homes in more than 200 villages across the Golan Heights. According to Syrian birth rate statistics, the number of Golan Heights' refugees and their descendants has reached about 500,000 today. Most of the villages were completely destroyed and were replaced by Israeli settlements, although according to UN resolutions, even now the Golan Heights is considered Syrian territory. One can assume that thousands from among some 4 million Syrians who have found refuge in Turkey and Jordan or those who are wandering around Europe are Golan Heights refugees or their descendants. If little Israel is too small to take in several thousand families from among the 1967 refugees who have now lost their homes for a second time, why not let them settle in the West Bank, as suggested by Palestinian President Mahmoud Abbas? Netanyahu has promised in any case that a Palestinian-Arab state will be established there, and he has to be taken at his word. After all, it’s just words.