After years of ignoring the fate of African asylum seekers, the human dilemma has risen to the top of Israel's public discourse, forcing the authorities to confront it. 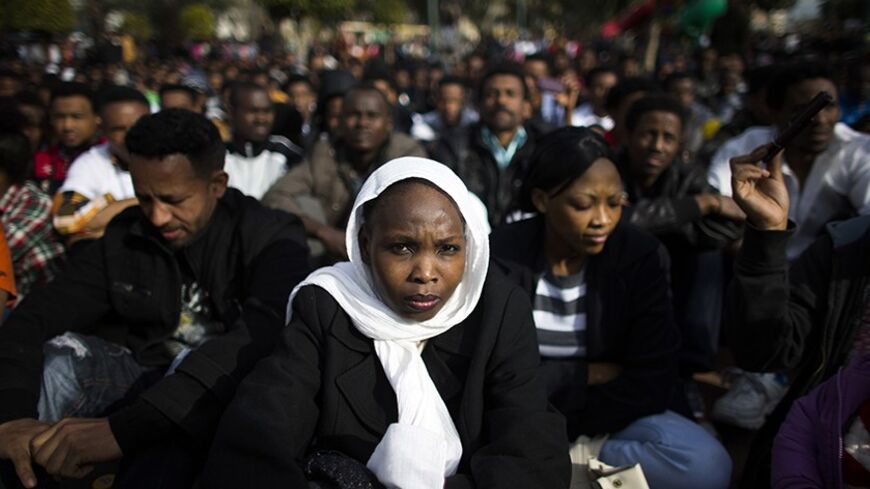 An African migrant sits with compatriots on the third day of protests against Israel's detention policy toward migrants it sees as illegal job seekers in Tel Aviv, Jan. 7, 2014. - REUTERS/Ronen Zvulun

On Dec. 17, when a dazzling blanket of snow still covered the open space adjacent to the prime minister’s office in Jerusalem, they got off the bus and walked silently in two lines. Some of them held cardboard signs bearing slogans in English such as “Freedom” and “No More Prison.” That setting only added to the surreal spectacle: Rows of dark-skinned men, some with tears streaming down their faces, marched past chanting, “We are human beings!”

Most Israelis and the media still refer to them as “infiltrators.” Those with a more lenient attitude prefer to call them “illegal residents.” Human rights organizations consider them to be asylum seekers and demand they are recognized as refugees — as people whose homeland has become a desolate wilderness. In many cases, it more resembles a killing field.

Two days had passed since they left Holot, an “open detention center” that the government set up in the southern Negev region after the Supreme Court invalidated a law, which would have allowed it to keep the asylum seekers in prison for up to three years. The facility's guests are expected to appear before the authorities to be counted three times a day. At night, they are shut in behind locked gates. It was from there, deep in the desert, that these asylum seekers began their protest march to Jerusalem, a city that the vast majority of them had never even seen. They hoped that once they were there, standing face to face with the government's institutions, they would be able to ask that the gate to freedom be opened for them.

After spending many long hours marching in an exceptional orderly fashion to the gates of the Knesset, and after standing for an extended time in frigid temperatures, the immigration authorities determined that the 48 hours in which they could not be arrested were up. In a swift action, using excessive force, the 307 Africans were forced onto buses and police vans. Some of them spent the night in Holot, while others were moved to Saharonim Prison.

The violent conclusion of what was called the “Freedom March” was just the first in an unprecedented series of protests that took place throughout the country. After the protesters were imprisoned, and following a series of raids by the immigration authorities in south Tel Aviv, which led to the arrest of about 150 more people, the weakest community in Israel launched a series of demonstrations. Hundreds of demonstrators soon turned into thousands, and then into tens of thousands. Marches in south and central Tel Aviv led to a huge strike, which was impeccably organized.

According to police estimates, the number of demonstrators at the second rally held in Rabin Square — a symbolic site of demonstrations for Israelis — exceeded 20,000. Thousands of workers left their restaurant sinks to experience and offer a lesson in civil action. A community accused of being little more than immigrants seeking work — of having snuck across the border just to earn a living — chose to risk any modest economic security that they had acquired and demand to be recognized as refugees.

The images were broadcast and described to people around the world. Millions of Europeans watched desperate asylum seekers being persecuted by Israeli police. Senior politicians flooded Knesset debates and the media with venomous statements about the asylum seekers. And all this was done under the title of protecting the Jewish majority in the State of Israel.

Was the situation really so dire? Ever since the border fence with Egypt was completed, the number of people who have managed to cross it and enter Israel from the Sinai Peninsula are very few. According to figures released by the Population and Immigration Authority, there were 53,636 asylum seekers (“infiltrators”) in Israel last October. If that group was allowed to run in the election and if its members voted unanimously for their own party, it still would not pass the voter threshold. At the same time, however, there are some 93,000 “tourists without valid visas” in Israel, about half of them from the former Soviet Union. Needless to say, the government is not building special detainment centers for them. The number of people requesting asylum is also significantly lower than the number of legal guest workers in Israel (approximately 70,000), much to the relief of those companies that arrange to bring them to the country and employ them.

To anyone who objects, the government is quick to point out that Israel is the only Western country that shares a land border with Africa. This obligates the government to be especially cautious about maintaining the ratio between asylum seekers and the country’s citizens, more so, for instance, than European nations. It sounds reasonable, but the Knesset’s Center for Research and Information site reports that there are 10 countries in Europe in which the ratio is “worse” than it is in Israel. While in Israel there are 6.9 asylum seekers for every 1,000 residents, the ratio in Latvia is 151 for every 1,000 residents; in Estonia, 94.3; in Malta, 21.4; in Sweden, 12.6; in Norway, 10.8; in Switzerland, 9; in Austria, 8.8; in Germany, 8.3; in Luxembourg, 8.1; and in Cyprus, 7.3.

Some 26,000 Eritreans submitted requests for asylum to various countries around the world in 2012 alone. About 20,000 obtained refugee status, and another 1,500 received complementary protection. At the same time, by August of last year, a committee created by the Israel Immigration Authorities discussed just 80 out of 11,000 requests for political asylum submitted by African refugees. Every last one of them was rejected.

This does not mean that Israel has disregarded its commitment to the UN’s Convention Relating to the Status of Refugees, at least not since Israel decided to freeze the ''immediate coordinate return procedure'' of the infiltrators back to Egypt. As of that decision, not one of the asylum seekers was forcibly expelled back to his country of origin. But a source who is intimately familiar with the issue told Al-Monitor that instead the government is causing the Africans to leave of their own accord. He recalled how former Interior Minister Eli Yishai promised to make the lives of the asylum seekers so miserable that they get fed up with life in Israel. This was done by denying them work permits, forbidding them to open bank accounts and a whole series of similar decrees. As a result, some 2,600 people to date signed papers stating that they were “leaving of their own volition.”

Both the prime minister and the interior minister have shown how determined they are to expel all the "infiltrators," much to the satisfaction of the people living in south Tel Aviv. After all, they saw these asylum seekers cast at their doorsteps so unjustly, with utter indifference. At the same time, however, islands of solidarity with the asylum seekers have been popping up throughout Israeli society. Restaurant and cafe owners in Tel Aviv have been serving their food on paper plates in a show of solidarity with the demonstrating and striking workers. Some establishments have even closed their doors and put up signs announcing that their staff has gone to demonstrate alongside their African co-workers. At night, immigration inspectors continue to arrest these asylum seekers and ship them off to containment centers in the desert. In the day, the police may watch the marches taking place along the main streets of the city, but they do so with utter apathy.

For many years, Israeli society has ignored the black-skinned men and women who clean their stairwells and wash their dishes. The rousing demonstration by local civilians, standing shoulder to shoulder with people who were invisible until now, evokes a sense of pride and hope.