The Knesset and the government have a variety of ways to address the issue of African illegal immigrants short of jailing them without trial, but the right wing prefers to use them to attack the judiciary. 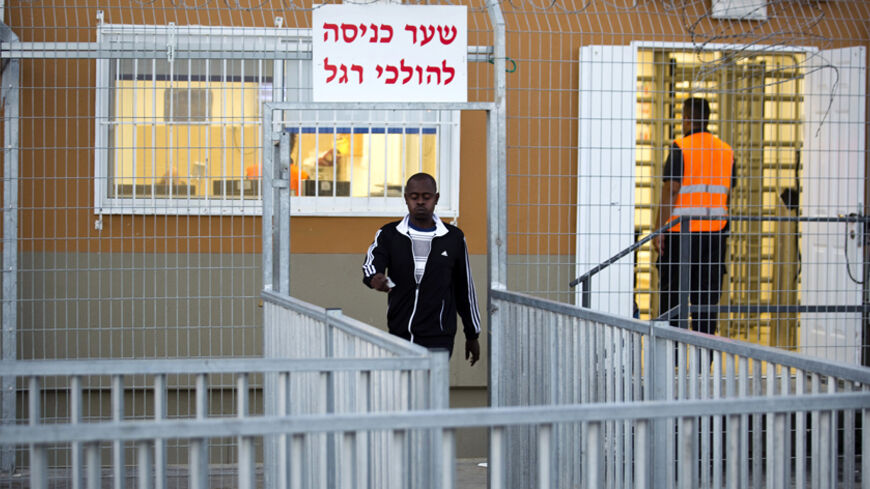 The Oct. 7 session of the Knesset’s Interior Affairs Committee started with a bang. The committee chairwoman, Knesset member Miri Regev, was a volcano waiting to erupt. She began with a clarification: “I am talking about labor migrants, not about the refugees. We will absorb refugees everywhere in the country — including the [upscale neighborhoods of] Rehavia and Kfar Shmaryahu, as well as the neighborhoods where the judges reside.” She then went on a personal, mocking tirade against Supreme Court Justice Uzi Fogelman, who headed the judicial panel that for the second time invalidated the anti-infiltration law. The legislation sanctioned the jailing of asylum seekers from Africa for one year at the Holot detention facility in the Negev.

“This ruling sent a message to tens of thousands of Africans: Come, cross the fence. … This is truly the land of milk and honey,” Regev said. She then turned to a resident of south Tel Aviv and asked him, “Do you have a partner? Go to Fogelman and ask him to help you find one. … All residents of south Tel Aviv, if you’re having trouble finding partners, go to the judge! The Supreme Court has become a matchmaker.” Regev was referring to one of the reasons the judges cited for rescinding the law: Prolonged internment prevents refugees from filling their lives with meaning and meeting a mate.

Regev’s frontal assault illustrated that neither the fate of some 50,000 asylum seekers nor even the distress of the residents of beleaguered south Tel Aviv were the real issue. Anyone who expected officials to deal matter-of-factly with the court’s second disqualification of the law, and wondered whether the government would actually change the policy, understood at once that the asylum seekers themselves were not the main concern. The 50,000 Africans are merely pawns in an epic struggle over a central value of Israeli democracy — the supremacy of lawmakers versus the supremacy of high court judges.

Interior Minister Gideon Saar, who announced Sept. 17 that he would be taking time off from political life and leave office after the Sukkot holiday, opted for a radical course. “The Supreme Court ruling does not enable the government to deal with the infiltration problem,” Saar told members of the committee. To bypass the court’s ruling, he wants to make use of an “override clause,” a tool that allows the Knesset to pass temporary legislation that contradicts the Basic Laws — in this case the Basic Law anchoring the right to human liberty and dignity. “The Knesset has final say, and the government bears responsibility for the unique character of the state,” Saar decreed. “We must not give up.”

“The character of the state”? Really? Will 50,000 non-Jewish Africans truly change the Jewish character of a state with more than 6 million Jews? True, the asylum seekers have changed the face of south Tel Aviv, the place to which the authorities sent them after they stole across the border from the Sinai Peninsula. Officials, however, have several ways of dealing with the problems of south Tel Aviv’s residents without arresting and deporting the asylum seekers. Instead of taking advantage of the residents’ suffering to try to diminish the standing of the judicial branch, the government could have abided by the court’s instruction to formulate a new policy — one that preserves the democratic and humane character of the Jewish state. For the benefit of Saar and his friends, here are a few related proposals put forward in recent years by human rights organizations:

The Supreme Court’s decision provides the state with an opportunity to right a prolonged, double wrong: harm to the welfare of thousands of Israeli citizens in south Tel Aviv and abuse of tens of thousands of Africans seeking refuge from persecution and hunger. The Supreme Court judges are not enemies of the state. They wish to protect Israel from its true enemies: racism and xenophobia.