Israeli Prime Minister Benjamin Netanyahu is framing a recent ruling to limit detention periods for asylum-seekers as further evidence of the threat they pose to Israeli society. 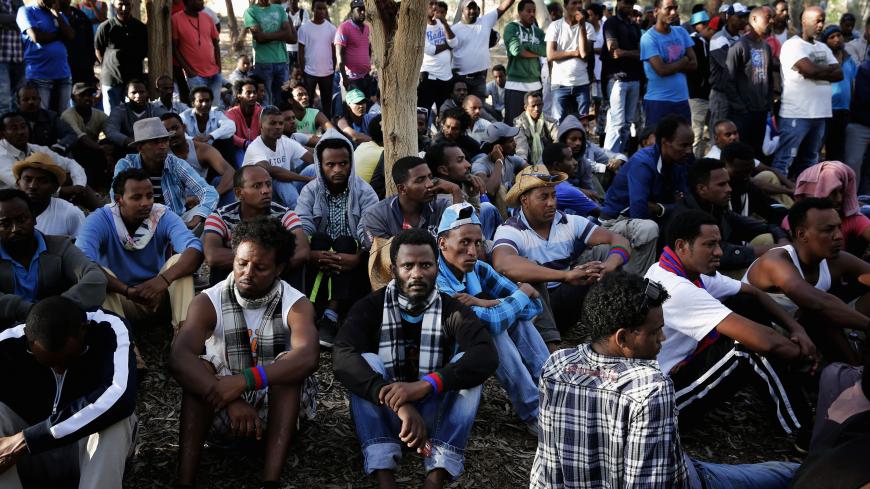 How often can one incite against liberals and dump on the media to divert public attention? It seems that every so often, the repertoire of fear and hatred must be diversified to continue distracting the public from the tightening noose of criminal investigations against the Netanyahu family.

On Aug. 28, Prime Minister Benjamin Netanyahu was handed a golden opportunity to spread some hatred. Five Supreme Court justices, known among the populist right as “elites,” issued a ruling that showed consideration for asylum-seekers, or as the famously law-abiding Israeli premier calls them, “illegal infiltrators.” A petition had been submitted by human rights activists to limit detention of this population. To hear Netanyahu tell it, all these asylum-seekers had joined forces to make life miserable for the downtrodden residents of southern Tel Aviv’s disadvantaged neighborhoods so dearly cherished by the prime minister and his wife.

In response, the nation’s top court sinned by limiting to two months the incarceration of those among an estimated 40,000 asylum-seekers, the vast majority (92%) from Eritrea and Sudan, who refuse to leave Israel. That’s all it takes to stand with the good guys — the impoverished Jews living in depressed neighborhoods — against the bad guys — the unfortunate Africans dumped in the heart of those neighborhoods. Absent permission to make an honest living, some are mixed up in crime. Nonetheless, according to data compiled by the Knesset’s research center, the crime rate among asylum-seekers is significantly lower than that of Tel Aviv’s wider population. Actually, in 2010, the number of criminal files opened for asylum-seekers in Tel Aviv was less than a fifth of the number of criminal files opened for Tel Aviv Israeli residents (one criminal file for every 15.9, compared with one for every 84.7 asylum-seekers).

The prime minister’s busy schedule was cleared after this ruling. His associates organized a high-profile visit to mark the opening of a new police station in a low-income southern Tel Aviv neighborhood where migrants have congregated. “I’ve heard the residents, and what I hear is pain and crisis,” cried Netanyahu, who could have financed an elderly couple in an impoverished southern Tel Aviv neighborhood for a whole year for the price of the cigars, champagne and pistachio ice cream flowing to his home. “We are here on a mission to give southern Tel Aviv back to the Israeli residents,” the prime minister promised local residents, who had been riled up by targeted right-wing incitement against the “liberal” Supreme Court. Netanyahu failed to tell them that two among the five justices who ruled on the petition had proposed that the state consider easing the burden of southern Tel Aviv’s residents by spreading the asylum-seekers throughout other parts of the country.

Justice Minister Ayelet Shaked also missed no opportunity to portray the High Court and its proponents as enemies of Zionism. She vowed, “Zionism should not continue, and I say here it will not continue, to bow down to the system of individual rights interpreted in a universal way that divorces them from the history of the Knesset and the history of legislation that we all know.” Interior Minister Aryeh Deri rushed to threaten new sanctions against those who dare employ asylum-seekers who refuse to leave the country for Uganda or Rwanda. “We cannot let an infiltrator who refuses to leave to be freed from detention and allowed to live a free and normative life,” argued the convicted felon who served time for corruption. “The poor of your own town have prior rights,” the man with the Jacuzzi and vacation home wrote on Facebook, citing a famed Talmudic saying.

The prime minister pledged to form and head a special ministerial committee and involve the residents and relevant institutions to resolve the problem. But before he convenes a committee and conducts a round table, the prime minister should do some homework. As a first step, he would do well to read the Jan. 14, 2016, protocol of the Ministerial Committee on Legislation. He would find that the panel had rejected a proposed bill that would have eased the distress and suffering both of the asylum-seekers and of the southern Tel Aviv residents. The legislation proposed by the opposition Zionist Camp Knesset faction was based on a detailed plan prepared by then-Knesset member and former police commander Moshe Mizrahi. It contained the following provisions: granting economic incentives to communities and employers willing to house and employ asylum-seekers, designating southern Tel Aviv as a special priority zone entitled to various benefits, investing significant resources in upgrading the infrastructure of those distressed neighborhoods and strengthening law enforcement in those areas.

“The most amazing thing is that this government wastes immense resources to really abuse the minuscule number of 39,000 Africans as well as the women and men of southern Tel Aviv,” Knesset member Merav Michaeli, head of the Zionist Camp Knesset faction, told Al-Monitor this week. “With half this effort the state could have investigated their status and allowed those who cannot be deported to work in a manner benefiting the country as much as them,” Michaeli added. “Instead, successive Netanyahu governments have taken the most vulnerable people, who were willing to do anything we told them, and are simply abusing them and the residents of southern Tel Aviv.”

After perusing the discarded legislation proposal, the prime minister should ask for the July 2016 position paper compiled by the Institute for Immigration and Social Integration at the Ruppin Academic Center. The center’s researchers found that vocational training of asylum-seekers in construction, hotel work and agriculture and their dispersal throughout the country in towns and villages desperate for such workers would contribute 3.3 billion shekels ($926 million) to Israel's gross national product. Tax revenues would grow by 119.6 shekels ($33.6) annually and social insurance payments would increase by 6.3 million shekels ($1.77 million). The annual deficits at hospitals unable to collect payment for the treatment of asylum-seekers would shrink by 10.3 shekels ($2.9 million).

These vast sums could then be invested in upgrading infrastructure, health care and education in the disadvantaged areas of southern Tel Aviv. But then Netanyahu will be forced to renew incitement against the liberals and the media. Have no fear, he is certain to find new enemies.