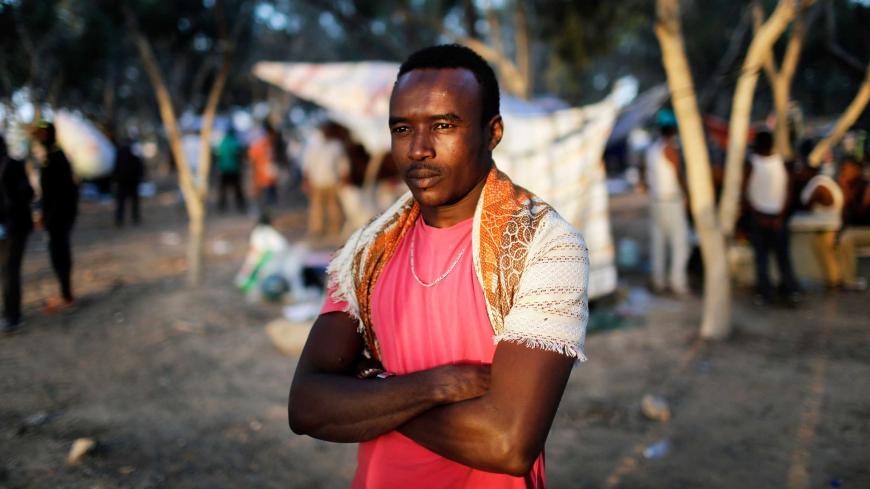 An African asylum-seeker stands in the shade of trees during a protest after leaving Holot refugee detention center in the Negev Desert, southern Israel, June 28, 2014. - REUTERS/Finbarr O'Reilly

At first authors protested, then El Al pilots, followed by school principals, psychologists and Holocaust survivors. Together they managed to mobilize large parts of the Israeli public to protest against the deportation of tens of thousands of asylum-seekers and economic migrants to a grim and dangerous fate in Africa, drawing on a strong collective memory of the Holocaust of European Jews and humanistic Jewish values that at times seem to have disappeared.

It is too early to tell whether the growing protest would succeed in causing the right-wing government headed by Benjamin Netanyahu to ease the decree of deportation. But regardless, it will force the leadership to answer questions of principle on Jewish ethics and mutual responsibility. In other words, the mass deportation of African asylum-seekers will not pass quietly.

This is a relatively young protest, which has gathered steam in the last week. It started following preparations to implement the infiltrators law the Knesset passed in December and the closure of the Holot refugee detention center in the Negev Desert. As a result, the government decided on a plan to deport infiltrators to a third country in Africa. According to the plan, whoever does not agree to leave to Rwanda or Uganda, in exchange for $3,500, will be imprisoned. According to estimates, between 20,000 and 40,000 people are at risk of deportation.

The first public act of protest was led by several dozen respected authors, including winners of the Israel Prize, Amos Oz and A.B. Yehoshua. In a Jan. 18 letter to government ministers, they wrote, “We call on you to act morally, humanely and with compassion worthy of the Jewish people, and to stop the deportation of refugees to the hell from which they fled before it starts. Otherwise, we will have no reason to exist.”

This was a harbinger that didn’t draw much interest, mostly because it is a group from which such a statement is expected.

Two weeks ago, the social organization Zazim started a media campaign calling on pilots to refuse to take part in the deportation of refugees. It was an immediate success. Several El Al pilots joined the protest, posted on social networks and managed to widen its scope. This is a socially powerful group, identified with patriotic values and a source of national pride: Most El Al pilots served in the air force, and it is rare for them to make a political statement. Thus, the public and media effects were powerful.

Pilot Shaul Betzer wrote on his Facebook page, “As a member of the Jewish people, who grew up and was educated in Zionist values … who has lived here all his life, and took part in military operations across the border … there is no way that I, as part of a flight crew, will participate in taking refugees/asylum-seekers to a destination where their chances of surviving are minuscule.”

Shortly after, Holocaust survivors joined the protest, declaring that they would be willing to hide refugees in their homes. Some of these elders were saved from death by the aid of strangers who hid them in their homes from the Nazis, thereby endangering themselves. The analogy was clear and the public effect of this statement was powerful. Holocaust survivors interviewed by daily Yedioth Ahronoth said they couldn't live in peace with themselves if they didn’t fight for the refugees from Africa. “Haven’t we learned anything from the Holocaust?” asked Haim Roth, 85, who was hidden by a Dutch family during World War II. Professor Veronica Cohen, 73, who was born in a ghetto in Budapest, said, “I always asked myself if I would be strong enough to do what the righteous gentiles did, but here we’re not asked to risk our lives, I feel that it’s my human duty to hide refugees.”

Subsequently, 530 psychologists, some of whom work with refugees, sent a letter to the prime minister calling on the country to be a model for the rest of the world.

School principals from all over the country also wrote to the prime minister and the minister of education asking to stop the deportations: “We, who are entrusted with the education of children of all ages and teach the moral and legal foundations on which this country was founded as written and anchored in the Declaration of Independence, call on you to stop the deportation of asylum-seekers to countries where they are expected to face torture, suffering and death.”

In response to the growing protest, Minister of the Interior Aryeh Deri wrote on Twitter Jan. 23, “Refugees from war will stay in Israel. Infiltrators will be returned to their countries. Most of them are infiltrators, we’ll return the neighborhoods to their residents because the poor of your city shall come first."

There was a reason Deri used the Talmudic expression (Baba Metzia 71:a), “The poor of your city shall come first.” He well understands the potential political climate created by photos of refugees boarding planes, and pilots refusing to carry out the mission. It would be hard for him to explain how he can sleep at night when these strangers are flown toward their deaths, and why he ignores the equally Jewish command, “And you are to love those who are foreigners, for you yourselves were foreigners in Egypt” (Deuteronomy 10:19).

Sadly, like many other issues in Israeli society, so too the debate on the fate of asylum-seekers and economic migrants quickly turned into a populist and tribal battle between the right and left. Netanyahu, Deri and other ministers such as Miri Regev have often used cynicism, disinformation and even incitement against this weak population from Africa to make political gains among residents of the southern neighborhoods of Tel Aviv, where most of the refugee population is concentrated.

According to data from the Central Bureau of Statistics, not one infiltrator from Africa entered Israel in 2017 — because of the fence along the border with Egypt that prevents such infiltration. So the issue is under control. The State of Israel is strong enough to find a solution to the problem of refugees by means of a systematic program: spreading the asylum-seekers from Tel Aviv throughout the country, helping to integrate them and provide job training. None of this would hurt “the poor of our city.” Quite the opposite: It would only make us a stronger society, and we would truly be a light to the nations, as is written in the Bible (Isaiah 49:12).