Asylum-seekers in Israel are now losing their jobs and social security over the coronavirus outbreak. 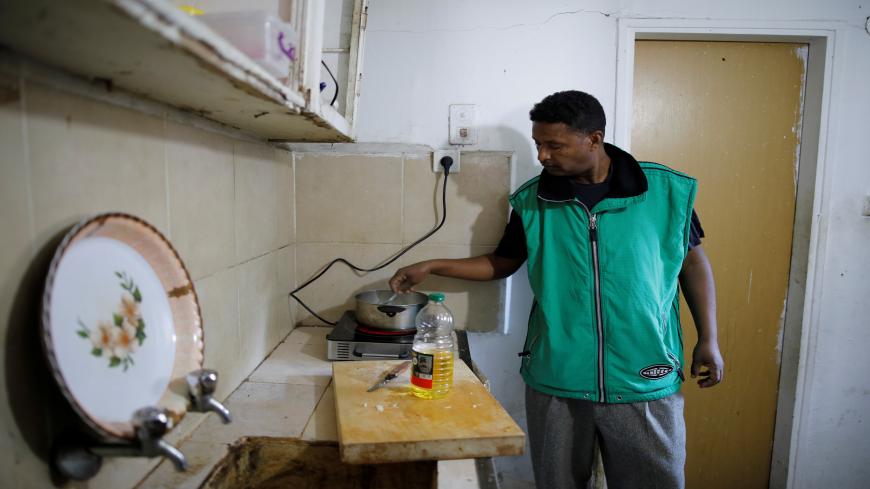 Merhawit, a 34-year-old single mother of two school-aged children is an asylum-seeker from Eritrea. Fleeing war and her violent husband and his abusive family, she came to Israel some 10 years ago, brought by smugglers through Egypt and the Sinai desert, where she was repeatedly raped.

Today, she lives in downscale south Tel Aviv in a crowded apartment with two other families. Until the coronavirus lockdown, she worked as a cleaner in an office building. She was fired in mid-March and has not been called back.

"I have no money, no income," she told Al-Monitor in a WhatsApp conversation. "How will we survive? What will we do if I get sick?"

There are approximately 30,000 asylum-seekers in Israeli, most of whom, like Merhawit, live in the south Tel Aviv area; the majority of them come from Sudan and Eritrea. According to the 1951 UN Refugee Convention, which Israel has signed, individuals fleeing persecution are entitled to request asylum from the country to which they escaped. The host country is obligated to investigate, on an individual basis, whether the person is indeed entitled to refugee status, according to specific UN-mandated criteria. Refugee status automatically confers residency rights and numerous other benefits; if the individual does not meet the criteria, he or she can be deported.

According to Noa Kaufman, director of the Refugee and Asylum-Seekers Unit at Kav Laoved-The Worker's Hotline, a nongovernmental organization (NGO) promoting workers' rights throughout the world, 86% of Eritreans and 65% of Sudanese receive refugee status. Israel, however, has refused to establish a process to review these applications. To date, less than 1% has received refugee status; this is the lowest rate in the Western world.

Despite criticism from the United Nations, Israel refers to the asylum-seekers as "mistaninim," a particularly derogatory word, roughly translated as infiltrators, and insists that they are economic migrants, who pose an economic, demographic and security threat.

This leaves the asylum-seekers in a state of limbo. According to UN regulations, they cannot be forcibly deported back to their native countries or to a third country. At the same time, they also cannot work in Israel — although the government does not enforce this — and they are not entitled to health care or other benefits. And now, many of them, like Merhawit, have lost their jobs due to the pandemic and, not eligible for state aid, are at risk of losing their homes and ending up on the streets.

According to media reports, Israeli officials are concerned about the possibility that the virus is spreading within asylum-seeker communities. In late May, the Health Ministry set up a temporary site for free testing for the virus in the south Tel Aviv region. Merhawit has not received the results of her test and does not know how, or if, the medical officials will contact her — or what she will do if her test is positive and she is sent to a government-mandated "corona hotel," until she is well.

"I can't isolate myself in our tiny apartment," she said. "If I am sent away, who will take care of my children? At least we got our 'deposit money' back, so we have had money for food until now."

"Deposit money" refers to Israel's 2017 law requiring that employers garnishee 20% of an asylum-seeker's wages, to be returned only when the asylum-seeker leaves Israel. In response to a petition by Israeli human rights organizations, the High Court of Justice determined April 23 that the law violated the property rights of the asylum-seekers, who have been particularly hurt by the recent economic and social lockdown.

Numerous NGOs and volunteer groups have been founded to aid the immigrants, but the asylum-seekers also encounter opposition, sometimes violent, from residents in south Tel Aviv who demand that all the mistaninim be immediately expelled. One local resident, Sheffi Paz, has formed the "South Tel Aviv Liberation Front," which holds regular demonstrations in public parks where asylum-seekers congregate and in front of the schools their children attend. Paz has been indicted twice for spray-painting threatening graffiti on buildings in Tel Aviv. In mid-May, on his first day as public security minister in the newly established government, Amir Ohana (Likud) met with Paz and other local activists, indicating that he, too, intends to continue the current harsh Israeli policies.

"These people escaped persecution in their home countries, hoping to find safety in Israel. Instead, they face constant discrimination, oppression and racism," Diddy Mymin-Kahn, director of Kuchinate, a collective for African women, told Al-Monitor.

According to a stinging report by the State Comptroller in 2018, Israel has never established a coherent, effective policy for dealing with the African asylum-seekers, who first began arriving in 2007, escaping the wars and unrest in their home countries. Initially, their numbers were small, and Israeli authorities largely ignored them, allowing them to work and live "under the radar." But by 2011, as many as 2,000 asylum-seekers arrived in Israel every month. To put an end to the "infiltration," Israel built a wall along its border in the Sinai desert. It was completed in 2012; since then, few if any new asylum-seekers have arrived.

In April 2018, Israel came to an agreement with the UN refugee agency, UNHCR, according to which 16,250 asylum-seekers would be resettled in Western countries and an equal number would receive residency status in Israel. But Prime Minister Benjamin Netanyahu's right-wing coalition opposed allowing any asylum-seekers to stay in Israel.

"I am very thankful to the many Israelis who help us, and I am very afraid of the Israelis who hate us. I didn't come here to be a burden. I have nowhere to go," Merhawit concluded.