Is interior minister deceiving Israelis about deportation of migrants? 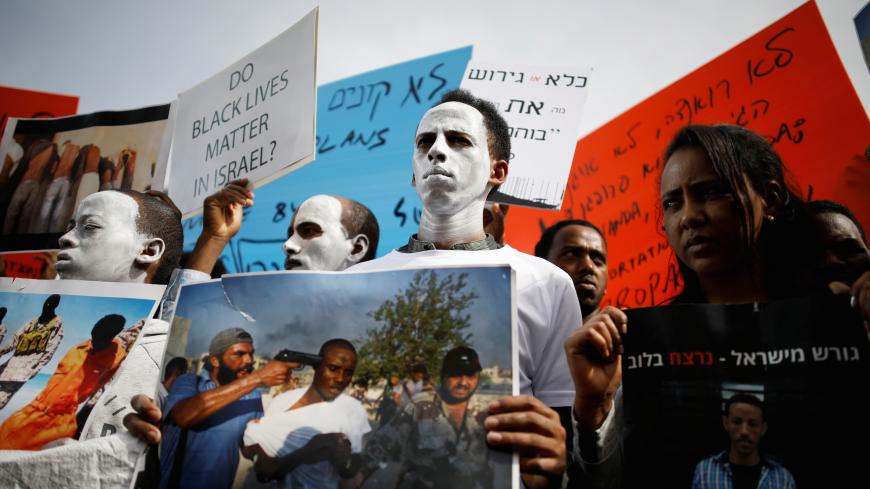 African migrants painted in white hold signs during a protest against the Israeli government's plan to deport part of their community, in front of the Rwandan Embassy in Herzliya, Israel, Feb. 7, 2018. - REUTERS/Amir Cohen

The planned deportation of thousands of asylum-seekers from Africa is nearing, and public debate in Israel is heating up over the question of how the Jewish state, a state of refugees, can send them to an uncertain fate. Since the deportation law passed in the Knesset in December 2017, Minister of the Interior Aryeh Deri, who was one of the shapers of the decision to deport the African immigrants along with Minister of Public Security Gilad Erdan, has claimed that a third country has been found to host and care for the asylum-seekers.

According to data by the Population and Immigration Authority, at the time the law passed, 35,000 Eritrean and Sudanese citizens were living in Israel, along with 5,000 children of asylum-seekers who were born in the country.

At the beginning of the year, the authority published data that in 2017, 3,300 African asylum-seekers left Israel of their own free will, after they were promised safe absorption in Rwanda and given a grant of $3,500. This is how the nation would deal with those bound for deportation now.

After the law passed, it became clear that things aren’t as simple as Israel has tried to depict them. Rwanda has denied that it signed an agreement promising to absorb the deportees. “In reference to the rumors that have been recently spread in the media, the Government of Rwanda wishes to inform that it has never signed any secret deal with Israel regarding the relocation of African migrants,” it communicated Jan. 22, after a demonstration in front of the Rwandan Embassy in Tel Aviv. In addition, testimony from asylum-seekers sent to Rwanda came to light that further contradicted the reassuring messages of the Israeli government and immigration authority.

This was also the signal for Deri to attack his critics and neutralize the arguments against him and against the deportation of asylum-seekers. In an interview with Army Radio Feb. 1, Deri defended himself, saying, “I’m full of compassion toward them, but I am responsible for the poor of my city. Little Israel can’t include everyone.” At the interviewer’s claim that 30,000 asylum-seekers and migrant workers do not endanger the security of the State of Israel, Deri pulled out his secret weapon that he prepared in advance in order to silence his opponents. He explained that for the good of Israel, he prefers that Palestinians would take the place of asylum-seekers from Africa.

While Deri did echo the opinion of the security establishment that the economic distress of Palestinians, especially in the Gaza Strip, should be eased, this was apparently an attempt to silence the harsh criticism against him. Deri might believe that his critics, who portray him as a man without a conscience who has forgotten the lessons of the Holocaust, are leftists mobilized by human rights organizations and who naturally also support more work permits for Palestinians. Deri thinks perhaps that presenting the Palestinians as benefitting at the expense of the African population would present a dilemma for the opponents of deportation. He said a government decision has been advanced to grant a work permit to one Palestinian for every two Africans who leave Israel. The decision has not explained how this ratio was determined.

The connection between the fate of African asylum-seekers and the economic situation of the Palestinians is nothing more than spin. Recently, Coordinator of Government Activities in the Territories Gen. Yoav Mordechai explained the authority’s policy of granting work permits to Israel in order to help the Palestinian economy. In a lecture he gave at the Israel Business Conference convened by the financial paper Globes on Jan. 11, he revealed that about 100,000 workers were given work permits. Mordechai named the business sectors that rely on the labor of Palestinians, saying, “There are sectors in Israel that very much depend on Palestinian workers. We see this in the field of agriculture in fruit-picking in several sectors, where 90% or 100% of workers are Palestinians. The construction sector and the price of housing depends very much on Palestinians. Sixty percent of assembly line workers are Palestinians who come to work every morning; 40% of aggregates used by the construction sector come from quarries in the Judea and Samaria regions.”

Work permits allow a Palestinian to remain in Israel only until the evening; laborers must return to their homes in the territories at the end of a work day. African migrants work in different sectors, and many of them are employed during nighttime hours, in restaurants, hotels and leisure venues. Palestinians could not replace them.

Avia Mizrahi-Magen, the CEO of the largest hotel chain in Israel, Fattal, said in an interview to The Marker that deportation would be the final nail in the coffin of the hotel business in Israel. “The sector couldn’t function. The result of this process would be closing floors, and even entire hotels.”

The restaurant business also faces a serious shortage of workers. Oren Shenbal, one of the directors of the restaurant group R2M, regretfully explained to Ynet why the chain that operates some of the most popular culinary establishments in Tel Aviv is being forced to scale down its activity: “It’s hard to find workers, and even harder to find workers who want to work at night. … We all face a shortage of workers.” His words demonstrate that African laborers do not displace Israeli workers, and that Palestinians could not replace them. The initiative to deport asylum-seekers was not meant to benefit the Palestinians. This is a manipulation by the drafters and legislators of this law, who have forgotten what it means to be refugees. Sadly, they are motivated mainly by xenophobia.