In Jerusalem and across the West Bank, settlers exploit archaeological sites as ideological-political tools. 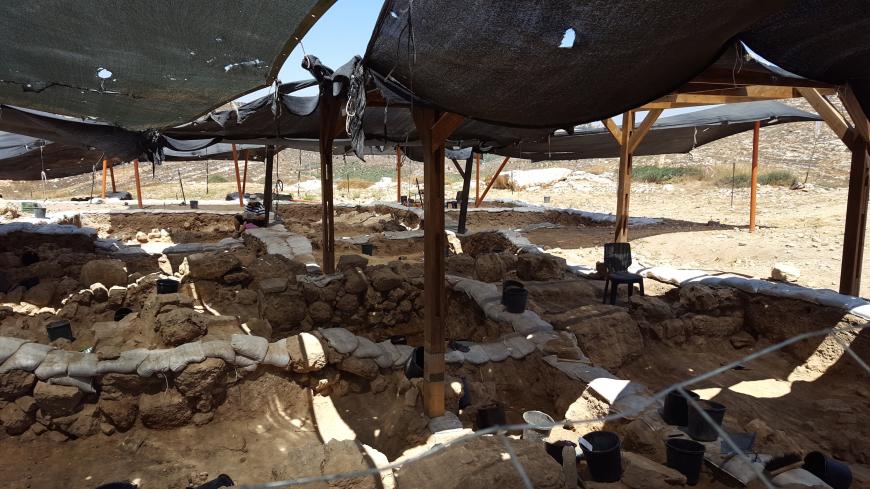 Excavations at the biblical town of Shiloh in the West Bank. Late 2016. - Emek Shave

The Israeli left made no bones about its glee over the empty bleachers at the Sept. 27 jubilee celebration of the liberation of Judea, Samaria, the Jordan Valley and Golan Heights organized by the settlers in the occupied West Bank. The left views the photos of the empty seats as proof of the settlers’ failure to occupy the hearts and minds of the general Israeli public. The leftists argue that not only did the billions poured by successive Israeli governments into the settlements for 50 years lure fewer than 5% of Israelis to live there — about 400,000 according to the Israel Central Bureau of Statistics — the vast majority avoided the wasteful “liberation festival.”

Yet the pleasure taken by the left in the seeming failure of the settlers and their patrons is somewhat pathetic. Granted, the right-wing concept of a return to the land of the forefathers has not created a major demographic shift of Israelis moving to the settlements. Nonetheless, the notion has ingrained itself in the minds of broad swathes of the Israeli public and of tens of thousands of visitors from around the world. It happens daily in Jerusalem’s Old City and throughout the West Bank.

This occupation is alive and very well, for example, at the site of Biyar Aqueduct that lies within walking distance of the failed jubilee ceremony in the Etzion settlement bloc that was organized by Culture Minister Miri Regev. Every year, some 100,000 women, children and men visit the Biyar Aqueduct that was built some 2,000 years ago to supply water to Jerusalem and the Jewish Temple. The aqueduct epitomizes the importance of the entire area as the source of life for Jewish Jerusalem in its golden age. The website of the Kfar Etzion Field School that operates the site reads, “Various researchers date the Biyar Aqueduct to different times over a 200-year period that began with King Alexander Yannai [of the Hasmonean period in the first century B.C.], through King Herod and even the Roman era.” Despite this uncertainty, the aqueduct is presented to visitors as a relic of the early Roman era, also known as the “days of the Second Temple.” According to official reporting by the field school to the nongovernmental organization registrar, the aqueduct tours brought in more than 16 million Israeli shekels ($4.5 million) in 2014.

“The Biyar Aqueduct is an example of a 'tourism settlement' — creating a tourist site on ancient relics and marketing the place as an Israeli heritage site,” archaeologist Yonathan Mizrachi told Al-Monitor. Mizrachi heads the Emek Shaveh center that seeks to prevent the use of ancient relics as a tool in national conflict or a value justifying harm to weak groups. Such use is made by the operators of the City of David site below the walls of Jerusalem’s Old City, on the land of the Palestinian village of Silwan. Almost every Israeli high school student and soldier is brought to visit the site, becoming an advocate of an Israeli presence there. Silwan’s Muslim past and the link of its residents to the place is presented as random and negligible, if at all.

At the jubilee event, Prime Minister Benjamin Netanyahu declared, “There will be no more uprooting of communities in the Land of Israel. … We will uproot neither Jews nor Arabs.” Constraints imposed by his hard-line coalition partners will prevent him from evacuating Jewish outposts in the West Bank, but the Palestinians aren’t counting on his declaration to thwart the uprooting of their homes and schools in the Jordan Valley and Hebron Hills. The Netanyahu government has been pulling them out by their historic roots for years.

“We have restored our historic continuity,” Netanyahu boasted in his speech, referring to the 1967 Israeli conquest of the Etzion bloc and other areas of the West Bank and East Jerusalem. “What was in these lands when we did not control them?” the prime minister asked. “A foreign army, terror activity, mine fields,” he offered as a reply. Is that really all that was there up to June 1967? Is there really “historic continuity” in the Land of Israel? What about 350 years of Roman rule and more than 300 years of rule by the Byzantine Empire? And how did 400 years of Arab rule (638-1099) slip the mind of Netanyahu, the son of a noted historian, Benzion Netanyahu?

“There is clear evidence at the Biyar Aqueduct — as there is at other sites — of the presence of the sons of the Judean Kingdom or of Jews at various periods,” Mizrachi conceded. “The problem is that these sites are being used as propaganda tools to establish the right of Jews to those lands, and the multicultural aspect of thousands of years of history is sidelined or even wiped out of the whole story.” Israelis talk a lot about the first and second temples in Jerusalem, Mizrachi added, but they don’t tell you that the land continued to develop also under the Romans and Byzantines, and that Emperor Saladin not only conquered the land, but also orchestrated demographic shifts there.

The director of the small organization, consisting of four employees and some 10 volunteers, brought up the 2010 government resolution to turn Shiloh into a central tourism and heritage site in the Samaria region of the West Bank, at significant investment. Although excavations have unearthed churches and decorated mosaics from the Byzantine period, Mizrachi noted, clear attempts are being made through archaeological research “to prove” the biblical tale of Shiloh’s importance as an ancient center of Jewish worship. A private settlers’ organization that runs the site has established a park at the site entirely dedicated to the story of the shrine tent built by the Israelites. The site attracts tens of thousands of devoted Christians, mostly evangelists from the United States, Europe and South Korea.

Israeli law on archaeological sites resembles that of other countries around the world. When development and construction works are to be executed near ancient sites, the state must run “salvage excavations" to preserve the findings. A new study conducted by Emek Shaveh, based on documents obtained from the Israeli military’s civil administration authorities in the West Bank, refutes the accepted assumption that archaeological digs are largely conducted for research purposes. The study found that during a period of seven years (2007-2014), 90% of the salvage excavation requests submitted by the state were designed to enable construction of or within settlements, and only a small part in Palestinian villages. These findings demonstrate once again Israel’s discriminatory approach against West Bank Palestinians; most of the infrastructure work conducted prior to salvage excavations were designed to strengthen the settlements through the building of fences and developing infrastructure. Of note, the 1995 Oslo II Accord between Israel and the Palestinians stipulates that responsibility for archaeology throughout the West Bank would be handed over to the Palestinian Authority.

How can one blame those among the Palestinians who demand the right of return to their ancestors’ lands, when they base their claim on the 1947 United Nations Partition Plan that created the State of Israel? Israel uses slanted archaeology to steal the past of the Palestinian people. Israel is ruled by a politician — Netanyahu — who relies on the story of David and Goliath, the Hasmonean wars against the ancient Greeks and of Bar Kohba against the Romans to shatter any vestige of hope by the two people for a better future. The Jewish nation is deeply rooted within the Land of Israel; a land that has room enough also for the roots of the Palestinian people.