The discovery of an ancient treasure trove of gold coins by amateur divers off the coast of Caesarea risks sparking even more the appetite of antique thieves, who cause irreversible damage to archaeological sites. 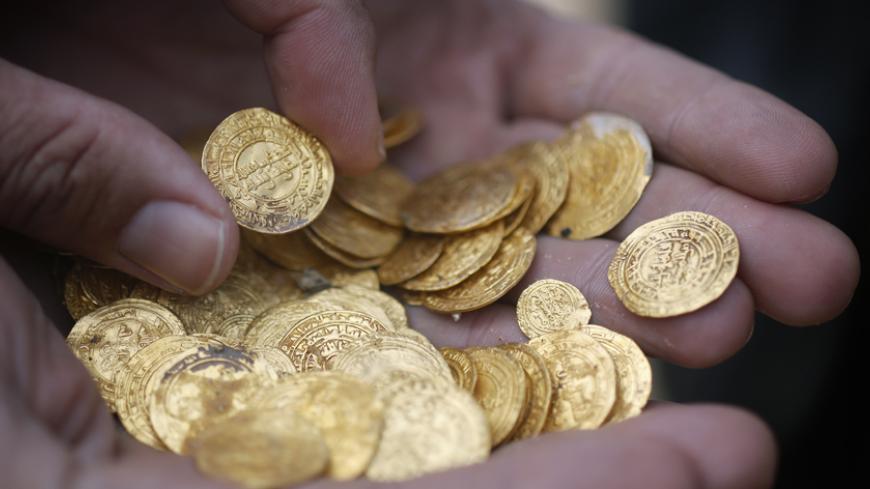 The staff of the Israel Antiquities Authority (IAA) gets very nervous whenever news breaks that a large archaeological treasure has been found. That is what happened Feb. 17, when amateur divers discovered a treasure trove of rare, ancient coins near the ancient port town of Caesarea. “We know that the discovery of a treasure of this size, and the publicity that such a find receives in the media causes people to think that they can find treasures just about anywhere,” Eitan Klein, deputy director of the Unit to Prevent Antiquities Theft at the IAA, told Al-Monitor.

Klein said, “People take the law into their own hands and set out to find antiquities themselves, even though this means breaking the law and causing destruction to important archaeological sites. For the most part, they don’t even find anything. What was discovered last week is the kind of thing that happens just once every 50 years.”

Israel has been considered a major crossroads of international commerce throughout almost all of human history. As such, it is full of archaeological sites. The IAA estimates that there are about 30,000 such sites in the country, most of them not even fenced off. Anyone who wants to can start digging. And as it turns out, a lot of people do.

The IAA believes that the discovery of some 2,000 gold coins dating to the year 1000 at the bottom of the sea, in the submerged ancient port of Caesarea, will send the imagination of the country’s antiquities robbers into overdrive.

Just last December, a gang of six Palestinians was caught stealing antiquities in the Cave of Skulls in the Judean Desert. They were hoping to find ancient scrolls from the Second Temple period, and were carrying numerous artifacts including a lice comb from the Roman era. In another case, a gang of gold robbers was uncovered in the Hefer Valley, in the coastal central region of the country, while excavating a cave from the Roman-Byzantine period, 1,800 years ago, as well as Ottoman artifacts from 500 years ago, hoping to find gold there. On Feb. 1, robbers were caught breaking into ancient tombs in the Tel Ashkelon area. In their defense, they claimed that they were “just looking for worms to use as fishing bait.”

“It is only natural that there would be a lot of folk tales in Israel,” Klein said. “Most of them revolve around treasures that the Ottomans supposedly left in the country, but I have yet to hear about a real treasure that was actually discovered. That is why it is important to get the message across that these are just folk tales.”

The robbers are eager to excavate Ottoman era sites, as well as sites of Jewish settlement and burial from the Second Temple period, in the hope of finding rare coins from the Great Revolt (66-73) and the Bar Kokhba Revolt (132-135). The IAA estimates that the price of a single ancient coin on the black market could reach as much as $300,000. In August 2014, during work on the Tel Aviv-Jerusalem highway, a trove of 114 bronze coins from the Great Revolt was discovered. Luckily, the coins were found by IAA representatives. Those coins would have sold for a king’s ransom on the black market.

Even late Minister and Gen. Moshe Dayan, one of Israel’s most esteemed national heroes, was considered to be quite an antiquities thief. He conducted numerous illegal excavations that left him with an impressive private collection of antiquities. After his death, the collection was sold to the Israel Museum for some $1 million.

Klein distinguishes between two types of antiquities thieves in Israel. The first group consists mainly of individuals who purchase a metal detector and set out into the field to go treasure hunting. Klein said that just being on a site containing antiquities with a metal detector is a violation of Israel’s Antiquities Law. “Yet this particular phenomenon is becoming more and more widespread. While these people may be amateurs, they cause enormous damage to archaeological sites. Just recently, we caught a resident of Beit Shemesh. During a search of his home we found over 800 ancient coins, which he had found in the area surrounding the town. Each one of these coins is part of a puzzle. Each one is connected to the site where it was found, and it is our job to understand that context. If we don’t know where it was originally found, we are unable to place it within its historical context, and we are left with no way to conduct the necessary research to uncover the story behind it.”

The second group is far more dangerous. “Every year we catch 40 to 50 gangs of professional thieves, most of them Palestinians from Judea and Samaria. These are people who understand archaeology, know how to act in the field and know how to read the signs and clues indicating where antiquities are likely to be found. Each gang consists of five to 10 people who are trying to find as many antiquities as possible in as little time as possible, without giving any thought as to how to preserve the existing site,” Klein said.

Klein described the very sophisticated methods used by these gangs, and how they employ scouts near the excavators to warn them if the IAA is approaching. “Whenever they find something, they hide it so that if they are caught no antiquities will be found among their tools. We watch them using night vision equipment, as well as day vision equipment, and document their activities while they are at work,” he said.

Klein described these gangs’ activities as a “cultural [terrorist] attack.” He said, “They are destroying archaeological information, which is, effectively, the legacy and heritage of the Land of Israel. Once one of these gangs has been through a site, there is nothing left for archaeologists to do there anymore. The site has been completely ruined and the damage is irreversible.”

In 2013, four antiquities thieves were caught with a bulldozer in southern Israel while in the midst of an illegal excavation. Inevitably, they caused serious damage to an important site. Klein said, “But even without destruction on that scale, the very collection of these antiquities constitutes enormous damage."

After last week’s discovery of the ancient treasure trove of coins, the amateur divers immediately reported their find to the authorities, but that was a rare occurrence. “The divers in Caesarea were law-abiding citizens who knew that they should report the find to the Department of Maritime Archaeology at the [IAA],” Klein said, adding, “Thanks to them, an archaeological excavation will be launched, which will certainly lead to other finds and tell the complete story of the treasure that was already found.”

In other countries, people who discover antiquities are usually rewarded handsomely. In Israel, however, the IAA relies on proper education and a sense of ethics of the population. “Israel is rich in antiquities. They can be found just about anywhere. But antiquities belong to the state, and not to some specific citizen or other. They belong to all of us,” Klein said. But then he refers to the case of the divers from Caesarea, saying, “Obviously, the [IAA] will grant them a certificate and a token gift. It’s the least we can do to show our appreciation.”