The two contenders to the Saudi throne need signs of impending victory in their battles against the Houthis to secure their legitimacy to lead. 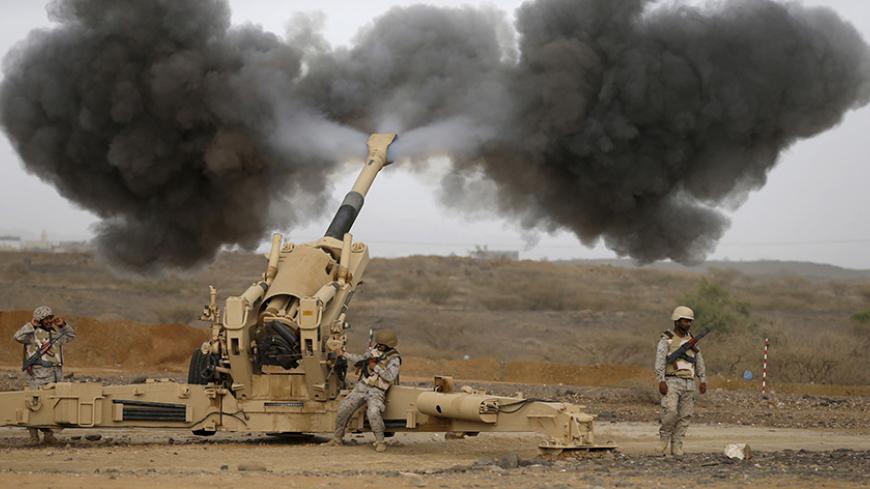 Saudi Arabia’s aggressive, interventionist foreign policy has so far led it to wage two external wars in addition to an ongoing battle on the domestic front. The government does not appear to be fighting the three campaigns with the same degree of commitment and dedication, but more important, none of its battles is yet to result in victory.

Riyadh's war against the Islamic State (IS) in Syria and Iraq — being fought through a commitment to the US-led international coalition challenging the group destabilizing the Levant — has spilled over into the heartland of the kingdom's oil-rich Eastern Province, prompting the necessity of fighting IS terrorism within its own borders as well as in the Levant. Recent attacks in Saudi Arabia have dismissed any doubt about the limits of IS' reach. Meanwhile, to the south, the kingdom has been launching airstrikes against the Houthis in Yemen under an umbrella of 10 reluctant, mainly Arab states.

King Salman bin Abdul-Aziz Al Saud has delegated the management of these multiple wars to two key princes. His son Mohammed, deputy crown prince and minister of defense, is in charge of the Yemeni war, and it seems he has also been asked to improve Saudi foreign relations. He recently visited Russia with the goal, according to Saudi sources, of bolstering relations. The multiple tasks handed the prince seem to blur the boundaries between his role in the war on Yemen and that as foreign envoy. This is not unusual in the kingdom, as previous princes in key positions also combined several roles into one, but this multitasking cannot mask the stalemate of the Yemeni war. After several months and one cease-fire, fighting continues unabated, with neither party able to claim victory.

Since its inception March 26, the hastily launched war on Yemen has never offered the promise of victory. The Saudis pledged to halt Houthi expansion beyond Sanaa, but after three months, the kingdom's southern border, mainly at Najran and Jizan, has come under Houthi shelling, resulting thus far in 11 deaths among border troops and civilians. Of course this number is minute compared with the 2,000 Yemeni civilians killed, but the point here is not about comparable fatalities. Rather, it concerns how the speedy victory the king and his son hoped for has been difficult to achieve, a potentially serious military setback for the intervention.

Saudi Arabia is a huge, sparsely populated country with most of its people concentrated in the capital and other big cities. It will take the Saudis some time to acknowledge that the southern war has moved from being external to one being fought on Saudi soil. In the view from Riyadh, the southern border with Yemen is a far-flung, peripheral area, but it is now a place coming to haunt them.

The population in the southwest has always been marginalized and poorly integrated into the kingdom. Since the advent of the oil economy, the local population has tended to seek jobs farther north. To the leadership, the southern border area is a security zone dotted with a military base and barracks instead of an area in need of serious development projects.

The war is bound to raise questions about the Saudi pledge to eliminate the Houthi danger, although the fatalities on the Saudi side play into the government propaganda that the war was a necessary pre-emptive strike to avoid such outcomes. Thus, the war has led to what the Saudi leadership had warned against in trying to justify it. Instead of victory in Yemen, Saudis are being killed inside their own country.

On another front, Crown Prince Mohammed bin Nayef has for quite some time been the lead figure fighting terrorism, pacifying its operatives inside the kingdom and reforming others through various rehabilitation initiatives. His earlier war against al-Qaeda in the Arabian Peninsula did not, however, eliminate terrorism, and neither has his current domestic battle against IS operatives. In fact, al-Qaeda was simply pushed to relocate to Yemen, while IS attacks on Saudi soil have so far claimed the lives of more than 20 Shiites. It is likely that any concessions to the Shiites by way of national reconciliation and additional recognition would enrage IS supporters, prompting attacks outside the Shiite areas. This fear might be so real that it is why in recent weeks the Saudi leadership has played down its commitment to fighting IS in the north.

Official Saudi media have prioritized reporting on the southern war and ignoring the one in the north. The leadership might want to focus on Yemen at the moment, with alleged Saudi airstrikes on IS within the coalition to the north taking second place. This prompts one to wonder whether the Saudis are really serious about the war against IS. If it is serious, it would not endear them to a substantial constituency inside the country not so keen on eliminating IS. In contrast, the war on the Shiite Houthis has been trumpeted across the country, with various voices characterizing it as a necessary measure. It has even silenced dissenting voices, including Islamists, who in the past had been critical of the Saudi leadership. Furthermore, IS must also be pleased about the Saudi efforts in Yemen. It as well as the leadership in Riyadh and activists in Saudi Arabia consider the war a justified attempt to counter Iranian expansion.

Dubbed the Mohammedyin, the two Mohammeds in charge of the Saudi wars have been entrusted with the task of securing the kingdom domestically while also fighting its enemies abroad. The longer their wars drag on amid the remoteness of quick, outright victories could influence their future claims to the top leadership. Dissenting voices from among the other princes might erupt to question the skills of both contenders to the throne. In recent weeks, Prince Mitab bin Abdullah, head of the National Guard, increased his media appearances at the frontier with Yemen. He had not been part of the war effort at the start, but has now suddenly emerged to register his presence, after almost two months of silence following the death of his father, King Abdullah, on Jan. 22.

To head off any nasty surprises, the two Mohammeds need speedy victories on several fronts, but might have to resign themselves to such outcomes being elusive. In the current configuration of the region, airstrikes and foreign interventions have proved to be futile gestures, leading to death and destruction but not stability.