The new Saudi king must reassure his domestic audience that his aggressive foreign policy will safeguard the kingdom. 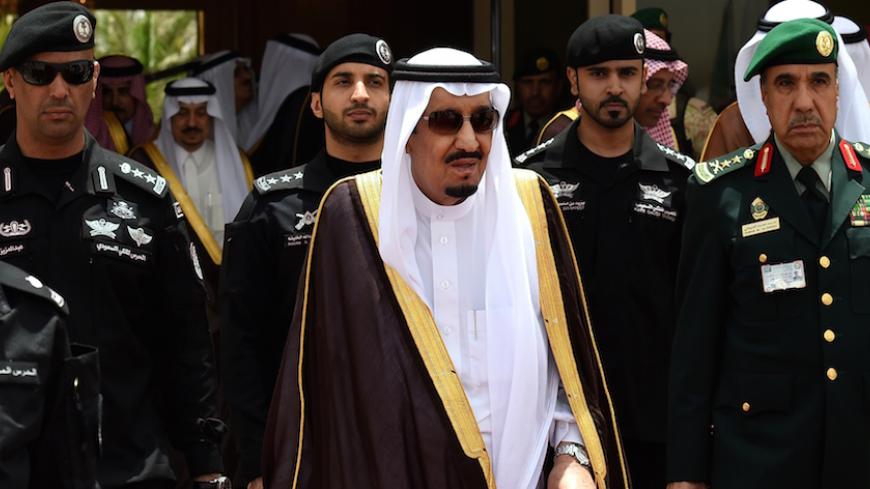 The swift victory over the Houthi rebels that Saudi Arabia wished for is increasingly hard to come by. While airstrikes on Yemen continue, the various Saudi personalities in charge of managing information on this ongoing war reveal several contradictory messages. Despite the abundant news conferences and military briefings since the beginning of the airstrikes in March, all pointing to Saudi victory after victory, it seems that the kingdom is now truly entrenched in the turbulent Yemeni waters with an anticipated prolonged stalemate rather than swift victory. This is a function of the futile use of Saudi airstrikes against multiple Yemeni forces on the ground, each trying to maximize its territorial gains and achieve the most expansion possible ​to eventually negotiate a political settlement granting the most power to those who annex the largest territory. Saudi fighter jets have achieved little in a war that is mainly fought on the ground between warring factions.

Newly appointed Foreign Minister Adel al-Jubair announced that there will be a five-day cease-fire in Yemen at a joint news conference with US Secretary of State John Kerry. This is a Saudi initiative to halt military strikes, perhaps after the realization that they have become repetitive and unsuccessful, except in killing around 1,400 Yemenis and demolishing neighborhoods in already crumbling and devastated cities with little left of their infrastructures and services. Images of ancient Sanaa attest to the devastation caused by bombing from the sky, in addition to ground battles fought between various Yemeni forces.

The Saudis can truly be held responsible for contributing to the recent devastation of Yemen and the killing of Yemeni civilians. Their intervention has so far resulted in no tangible success for the deposed Yemeni president or in altering the balance of power in his favor. The Houthis are still predatory and their ally, deposed President Ali Abdullah Saleh, is still enjoying his troubled return to the Yemeni political landscape. Or had he really left it?

While Jubair talks about a truce, Saudi military spokesman Brig. Gen. Ahmad Asiri is still beating the drums of war. He admitted on May 7 that the outlook of the war has changed from restoring the legitimacy of the exiled Yemeni president and safeguarding the unity of the country to targeting Saudi cities. He referred to Houthi rebels’ bombing of two southern regions across the Saudi border, Najran and Jizan. He promised Saudis that he would continue to protect them and punish the Houthis using the harshest possible means to deter them from targeting Saudi territories. Asiri also mentioned that Saudi Arabia donated $276 million to the United Nations in support of relief efforts and humanitarian aid to Yemen. Saudi bombs and aid are progressing hand in hand without either delivering the desired outcome.

Against accusations by Human Rights Watch that the Saudis used cluster bombs in their military strikes, Asiri dismissed the charges but promised to destroy Saada following the daring Houthi attack on Saudi territory.

As expected in this war, the target of these messages is above all domestic Saudi audiences, awaiting an outright victory over all the forces that allegedly threaten the sanctity of their country, be they the Houthis or Iran or a combination of the two.

King Salman ibn Abdul-Aziz Al Saud and his son Mohammed cannot afford to achieve anything less than total victory. The king chose to inaugurate his reign with an aggressive foreign policy, to mark this new era as distinct from the soft power and charm offensives of the late King Abdullah. With the new king, a serious reversal of policy and outright military intervention became the hallmarks of his new reign.

Saudi audiences need to be assured that the new king is the master of Riyadh’s security and the kingdom’s future. His predatory son Mohammed needs to establish his credentials as soon as possible not only as deputy crown prince but also as minister of defense. There seems to be urgency in this matter, given Salman's advanced age. Surely the young prince wants to be well established before his father dies.

The Saudi media hypes the trinity that now rules the country (the king, crown prince and deputy crown prince) as three warriors with white wings, framing them as men of peace and war. The propaganda tends to be basic and in need of serious refinement to escape the obvious cult of personality that is currently being woven around this trinity. 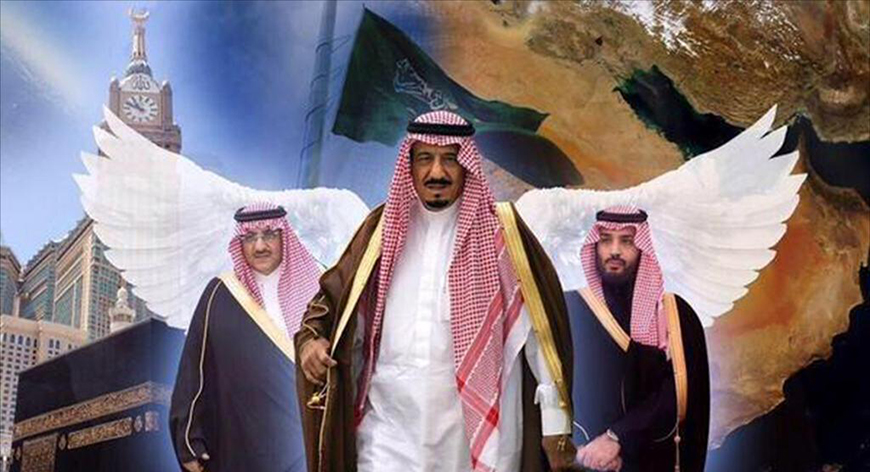 In reaching out to wider Arab audiences, this local Saudi propaganda is given further reach by pan-Arab media outlets such as the Qatar-owned Al Jazeera satellite station. Recent video clips of the king participating in the Arda sword dance are intended to show him as relaxed and untroubled by a war that has stumbled in achieving its objectives.

War on a foreign enemy brings out a quest for youth and vitality, which the young son of the king is bound to represent. Some Saudis are convinced by the display of propaganda while others look past it. The latter carry on with their lives, preferring to remain oblivious to vulgar representations of power and might. In the absence of any debate about the objectives, gains and losses of this sudden war, it is hard to accurately assess opinions. The majority remains in a state of waiting that is destined to last longer than anticipated.

An ill-defined war, hastily announced and from the day of its inception shrouded in ambiguous motives, is bound to become a prolonged military engagement. The Saudis risk becoming entrenched indefinitely in an adventure that neither helps battered Yemeni citizens nor scores undisputed victory for a leadership that is navigating a difficult terrain. The only way out of this awkward and dangerous situation is for the proposed five-day suspension of military action to become permanent, giving way to negotiation and compromise. This would allow Saudi Arabia to claim a different kind of victory rather than the one the Saudi leadership hopes for and ensure that the Saudis save face. But it is doubtful that the Yemenis will ever forget the devastation caused by the airstrikes of their neighbor, who has interfered enough in their internal wars.