Is Iran worried about IS on its border?

Statements by Iranian officials suggest that they are worried about the Islamic State reaching their borders and even carrying out attacks inside Iran. 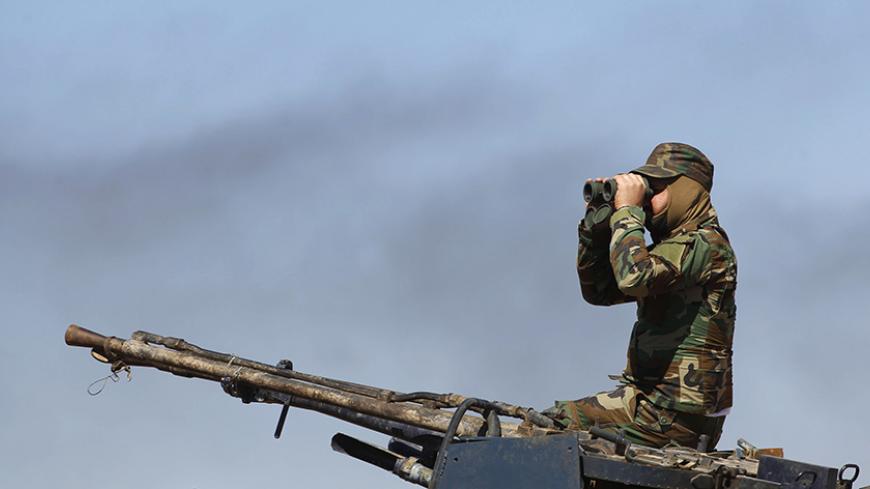 Brig. Gen. Ahmad Reza Pourdastan, commander of the Iranian army's ground forces, attended a closed-door session of the Iranian parliament May 24 and warned the members about the Islamic State (IS) threat.

“Today, the terrorist and takfiri forces are near our borders," he said. "A year ago this time, it came down from general staff headquarters that [IS] forces are in Jalawla and Saadiya and their next step would be Khanaqin, and then Iran. The takfiri terrorists of [IS] had recruited supporters and had planned a series of explosions and terrorist activities inside Iran until [IS] forces could reach the borders. However, their plots were unfolded by the Ministry of Intelligence."

He went on to say that five brigades were sent to fight against IS and Iran's infantry and helicopters penetrated into Iraq.

This is the first time that a high-ranking military official of Iran has officially commented on the IS presence near Iranian borders, or that IS is planning to attack Iran. There are usually reports of conflict between the Islamic Revolutionary Guard Corps (IRGC) and IS forces in the media. Now, however, it has become clear that Iran’s army has been fighting IS during the last few months. It's a rare event for the military forces of the Islamic Republic to enter Iraq without informing the United Nations. By acknowledging that five brigades were sent to fight IS, Pourdastan has acknowledged that more than 30,000 military personnel of Iran have been involved.

Four days before the general’s comments, Iran's Supreme Leader Ayatollah Ali Khamenei said, “I have heard that some, not all but some, of the weak-minded officials of the Persian Gulf region are trying to bring proxy wars close to the Iranian borders. They should know that if they cause mischief, the Islamic Republic’s reaction will be very harsh.”

Intelligence Minister Seyed Mahmoud Alawi said, “Supporters of a terrorist jihadist group were trying to poison the food of a committee in Tehran and there were also two bombing plots planned for last year’s Quds Day rallies in the cities of Zahedan and Shiraz. They had also taken an international swordsman hostage in Zahedan for a while. We started an operation against a group known as Ansar Al Furqan in south east of the country during which a certain individual named Abu Hafs was arrested alongside a group of suicide attackers.”

After reviewing these statements made by the senior military and security officials in the country, it becomes clear that the possibility of IS attacking Iran has increased. Unlike last year, when the Iranian officials sounded confident, this year, Interior Minister Abdolreza Rahmani Fazli warned that if IS comes within 40 kilometer (25 miles) of Iran’s borders, Iran will officially engage them.

So why have the Iranian officials started to worry about IS entering Iran? Possible reasons include:

• IS is determined to overthrow Iran, which they refer to as the Safavid state.

• IS military victories in different provinces of Iraq in the past few months.

• The existence of high military, social and religious potentials in the border provinces of Iran such as Kurdistan, Sistan and Baluchistan, Khuzestan and Kermanshah.

• The Iranian army's ground forces’ lack of proper weaponry. (Pourdastan had asked the Iranian parliament members to allocate a budget for the army to buy new tanks and helicopters.)

The reality is that when Abu Bakr al-Baghdadi declared an Islamic Caliphate in Iraq and Syria, warning bells started ringing in Tehran.

Because of the Shiite rule of the past three decades, Sunni Iranians living in the border provinces have political and ethnic grievances. In Sistan, terrorist groups such as Jundallah declared their existence, in Khuzestan takfiri groups started killing police officers and in Kurdistan there were conflicts between the Salafists and both the IRGC and local Shiites.

A journalist who lives in the Kurdish region of Iran and wished to speak on condition of anonymity spoke to Al-Monitor about the presence of Salafi forces. “Unfortunately we do not hear about them in the news," he said. "They have repeatedly attacked the Dervish groups and the police forces. Intelligent forces have managed to control them but people's peace of mind has been disturbed.”

In the last three decades, because of the eight years of war with Iraq as well as sanctions, the weaponry of Iran's armed forces has become outdated and obsolete. Iran’s attempts to produce modern tanks has been unsuccessful and all the helicopters in the Iranian fleet were made before the 1979 revolution. Iran’s military weakness compared to its neighbors such as Turkey or Pakistan is evident in the Military Balance Book of 2015. In case of a war, Iran is faced with certain problems including the possibility of collaboration between fundamentalist Sunni forces in the border regions with IS and al-Qaeda and the inadequacy of Iran's air fleet. All the Iranian helicopters and airplanes are a few generations older than those of neighboring countries. Right now, Iranian helicopters are similar to the models used during the Vietnam War.

The condition of Iran’s armor forces is the worst of its forces. The M-60, T-55, T-62, T-72 and Chieftain tanks are not suitable for modern-day battlefields. In many countries in the world, these type of tanks have already been overhauled. By asking for money to buy tanks, Pourdastan has clarified that Iranian tanks are not capable of resisting against modern anti-tank weaponry used by terrorists, and the Zulfiqar tank production project has been unsuccessful.

If Sunni jihadi forces attack Iran, the limited military forces of Iran have only one option. They must withdraw from Syria and Iraq to return and defend the borders of Iran. In that case, the government of Iraq and Syria are likely to face serious challenges and the government of Syria may even be toppled. All the various scenarios are a strategic threat to Iran’s national borders.