For the first time since Iran’s 1980-88 war with Iraq, the Iranian army is conducting foreign military operations. But who sent its Green Berets to Syria? 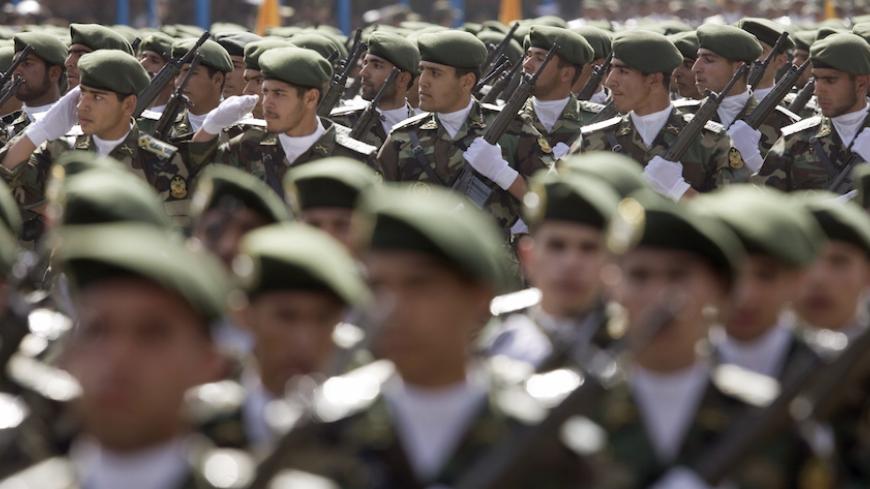 TEHRAN, Iran — Earlier this month, Brig. Gen. Ali Arasteh, deputy chief liaison of the Iranian army's ground force, for the first time publicly spoke about Iran’s military operations against the Islamic State (IS) in Syria. He told Iranian reporters, “Brigade 65 is a part of our army’s ground force and we are dispatching soldiers from Brigade 65, as well as other units, as advisers to Syria. This dispatch is not limited to commandos of Brigade 65, as advisers of Brigade 65 are already there.”

With the exception of the 1980-88 war with Iraq, the army had not conducted foreign operations since Iran’s 1979 Islamic Revolution. Only the Quds Force, the external operations branch of the Islamic Revolutionary Guard Corps (IRGC), and the Fatehin Brigade, made up of Iranian volunteers, had conducted advisory and ground operations in Syria and Iraq. The army is solely responsible for defending Iran’s borders, though if ordered by the commander in chief, Ayatollah Ali Khamenei, it can also undertake assigned foreign missions.

Brigade 65, also known by the abbreviation Nohed, is a special airborne force, and one of Iran’s most elite military units. It was formed prior to the Islamic Revolution, and had a very successful record during the war with Iraq. Its original core was formed in the 1950s, when the army sent 10 senior officers to France. In the ensuing years, two new brigades responsible for hostage rescue missions, irregular warfare, psychological warfare and support were added to the airborne force while Brigade 65 was created. Improved training alongside successful combat experiences — such as at the Manston Dhofar military base in Oman in the 1970s, and reportedly even in the Vietnam War — led this unit to become one of Iran’s best, alongside the Imperial Guard, by the end of the Pahlavi era.

Brigade 65’s participation in operations in Oman was official. This apparently was not the case in Vietnam; however, before his death, Gen. Alireza Sanjabi shared a memory with this author about how he had served as a sniper in Vietnam. Sanjani added, “Before the revolution, most of the training of this brigade was done in the form of joint operations with the British SAS.” Indeed, Brigade 65’s power increased so much that during the early days of the Islamic Revolution, certain members of parliament urged its dissolution since they feared it might attempt a coup. However, it was not dissolved and remains as strong as ever. In the 1990s, there was a mock military operation in Tehran where airborne forces were asked to take hold of all important military and political centers in the capital. Despite fierce resistance put up by the security forces guarding these centers, the powerful “Ghost Forces” were able to occupy the capital in two hours. Ever since, these army green berets have been known as the “Powerful Ghosts.”

Prior to its current deployment, Brigade 65 had not conducted foreign operations since the war with Iraq, as far as is officially known. There are, however, certain unconfirmed reports indicating that members of this brigade conducted reconnaissance missions in Iraq, Pakistan and Afghanistan.

While the IRGC has been in charge of providing support for the Syrian government since the outbreak of the Syrian civil war, the army during the past two years has taken pre-emptive measures in the fight against IS in order to neutralize any possible attack on Tehran. Last year, the commander of the army’s ground force, Brig. Gen. Ahmad Reza Pourdastan, mentioned operations involving the deployment of troops to the Iran-Iraq border and cross-border artillery strikes. He also said that “a rapid response unit as well as specialized sniper training schools have been formed during the past few months.” In addition, advanced military equipment has been delivered to these forces to prepare them to confront any threats.

Iranian classifications put the size of brigades at about 6,000 to 7,000 troops. Thus, it is probable that about 100 to 200 Brigade 65 commandos have been deployed to Syria. News of this deployment was heavily covered by Iranian media outlets. Indeed, only a few days after the deployment, reports of four Brigade 65 fatalities in Aleppo shocked public opinion. Pourdastan quickly described the situation to the press, “During an attack conducted by a few thousand takfiri [militant Salafi] forces and forces of Jabhat al-Nusrah on south Aleppo … four dear members of the [Iranian] ground forces were martyred. In this confrontation, a number of tanks and armored personnel carriers of the terrorist group al-Nusrah were destroyed and 200 terrorists were killed as well.” Based on the latter, it appears likely that the Iranians were the target of a surprise attack.

Following the wave of intense reactions to the deaths of the four Iranian commandos, army commander Maj. Gen. Ataollah Salehi said that the regular forces have no responsibility to render advisory services to Syria, and that there is an organization in Iran that carries out related measures. Salehi said that some volunteers have been dispatched to Syria under the responsibility of that organization and that there may have been some members of Brigade 65 among them. He added that due to the strict rules of the army, it seems very unlikely that its officers would enter Syria on their own and that they had probably done so under the orders of the armed forces' general staff. This statement conveys Salehi’s dissatisfaction with the presence of army forces in Syria.

The Syrian civil war appears poised to enter a new and more serious phase in the coming months. While Russia is reducing its military presence in Syria, Iran is trying to make up for that by deploying its own special forces. Considering the small number of Iranian troops that have been deployed, this may not be an important development from a military standpoint. However, it clearly shows that Iran is determined not to let the balance of power be disturbed in Syria. In the past few months, Iran has participated in the UN peace negotiations, clearly showing that it is not willing to capitulate to its regional rivals, such as Turkey and Saudi Arabia, after five years of having its soldiers injured and killed and having spent billions of dollars. Thus, it is possible that if the Syrian government is threatened more seriously, even more army forces will be deployed in Syria alongside the IRGC.