Israeli Prime Minister Benjamin Netanyahu was quick to express his glee when Iranian Foreign Minister Mohammad Javad Zarif offered his resignation, but what does it mean for Tehran's strategy in Syria? 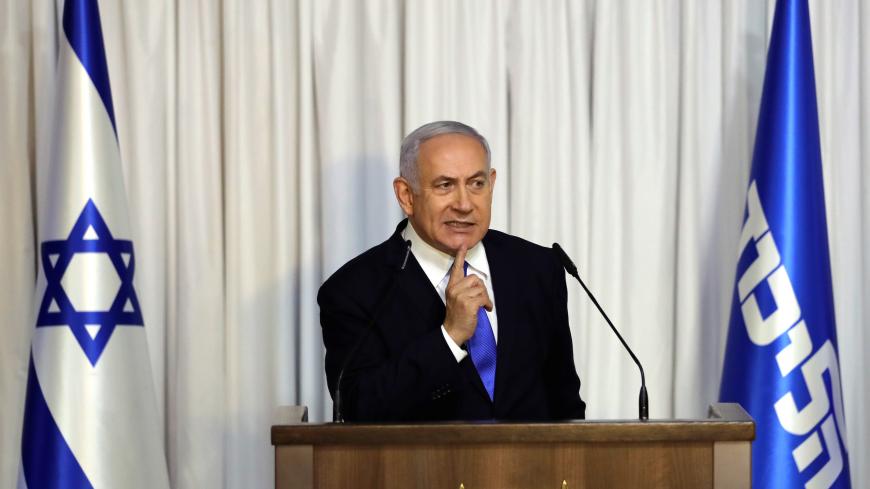 The resignation of Iranian Foreign Minister Mohammad Javad Zarif was good news for Israeli Prime Minister Benjamin Netanyahu. In fact, it was great news. He spared no effort to show his glee. To make sure Iranians were aware of how delighted he was, Netanyahu's Persian-language Twitter account on the morning after Zarif’s resignation read: “Zarif went. We are rid of him. As long as I am here, the Iranian regime will not acquire nuclear weapons.”

But now Zarif appears to be back, and that’s bad news for Israel given Zarif’s warm ties with many of his European counterparts. Zarif’s smiling face and veneer of moderation get under the skin of Netanyahu and many in Israel.

However, again there is good news: Zarif’s resignation revealed fissures within the Iranian political establishment over its Syria policy. This is evident from Zarif’s absence in President Hassan Rouhani’s meetings on Feb. 25 with his Syrian counterpart, Bashar al-Assad, which seems to be one of the reasons that Zarif resigned in the first place. Why was Zarif not invited? Surely it cannot be because someone forgot to send the invitation.

Netanyahu met with Russian President Vladimir Putin Feb. 27 in Moscow, where the conflict in Syria was a key topic in their talks.

Just as important for Israel, there are distinct signs attesting to the unpopularity of Iran’s Syria policy among the people of Iran — and even among its former and serving officials. Gholam-Hossein Karbaschi, the former mayor of Tehran, was recently sentenced to one year in prison for criticizing Iran’s involvement in the Syria war. The very fact that a former official is jailed for uttering a few lines of criticism shows fear by the regime in Tehran — fear of public opinion.

Another sign attesting to the unpopularity of Iran’s current Syria policy is the absence of debates surrounding this issue in the Iranian press. There are lively debates regarding numerous issues, but not on Iran’s policies in Syria. Iranian reporters could get called up for questioning if they criticize Assad, or worse, have their publications shut down temporarily. This was witnessed on the day of Zarif’s resignation when the Ghanoon daily called Assad an “Uninvited Guest.”

Even Maj. Gen. Ataollah Salehi — commander of Iran’s army, the Artesh — distanced himself from Iran’s involvement in Syria. After reports that four members of the Iranian army’s special forces belonging to the mythical 65th Airborne Brigade were killed in Syria, Salehi stated publicly on April 20, 2016, that his organization had no role in dispatching them to Syria. He put the responsibility on the shoulders of an "unnamed" organization, meaning the Islamic Revolutionary Guard Corps. He didn’t have to state this publicly. By doing so, it seems that he was indirectly showing his displeasure — and it's understandable that Iranians on social media were shocked as to how such a mythical fighting force lost four of its best soldiers and officers so soon after arriving in Syria.

Perhaps the clearest sign that Iran’s Syria policies are unpopular among the people of Iran is the fact that it’s not an election issue. There are no candidates for or against this issue. There are no debates during the elections when many other issues — including relations with the United States — are discussed. There are very valid reasons why Iran’s Syria policies are unpopular among the people of Iran. Despite Iran’s multibillion-dollar investment to save the Assad regime, Syrians in general are staying away from Iranian products. According to an interview with deputy head of Iran’s Chamber of Commerce Hossein Selahvarzi in November 2017, despite Iran allocating $1 billion in credit to Syrian companies to buy Iranian goods, and despite Iran having a preferential trade agreement with Syria, the Syrians are “creating limitations so that we cannot export our products.” He then went on to state that Syria’s market is “flooded” with smuggled products from Turkey, which Syrians are inclined to buy.

Iran also recently woke up to the rude awakening that when it comes to being awarded contracts in Syria, the Russians are trying to limit Iran’s participation. Furthermore, according to an article published Jan. 18, 2018, in the Ghanoon daily, “Even in consortiums between the Russians and the Syrians, if Iran wants to play a part in the process of Syria’s reconstruction, it has to negotiate with the Russians.” Iran sent forces and invested billions in Syria to make sure Assad stays as the arbiter of all in Syria, including the Syrian economy. Now, it seems that when it comes to Syria’s reconstruction, in some areas it's Putin who has the last word, not Assad. Is this why Iran went to war in Syria?

Last but not least is the question of Hezbollah and Iran’s deterrence. Iranian hard-liners have always tried to justify support for Hezbollah by portraying it as a proxy force to defend Iran against Israel — a powerful pro-Iran proxy that saves Iran from having to fight Israel directly. However, such logic has already lost part of its meaning as Israel has dropped more than 2,000 bombs on Iranian and pro-Iranian forces in Syria, while Hezbollah’s approximately 100,000 missiles next door in Lebanon can only sit and watch. Therefore, Hezbollah’s deterrence against Israel is clearly limited.

If anything, Iran’s involvement in Syria has seriously eroded its deterrence posture since Israel keeps attacking — yet Iran’s hands are tied and Russian air defenses in Syria sit back and do nothing. All of these factors are likely to bring up the question again in Tehran: Is the price being paid to support Assad worth our while? A rejuvenated and reinstated Zarif should use his supposedly stronger hand after his resignation to address this question.