Assad and his creditors

How to get Iran out of Syria? Put sanctions on the table. 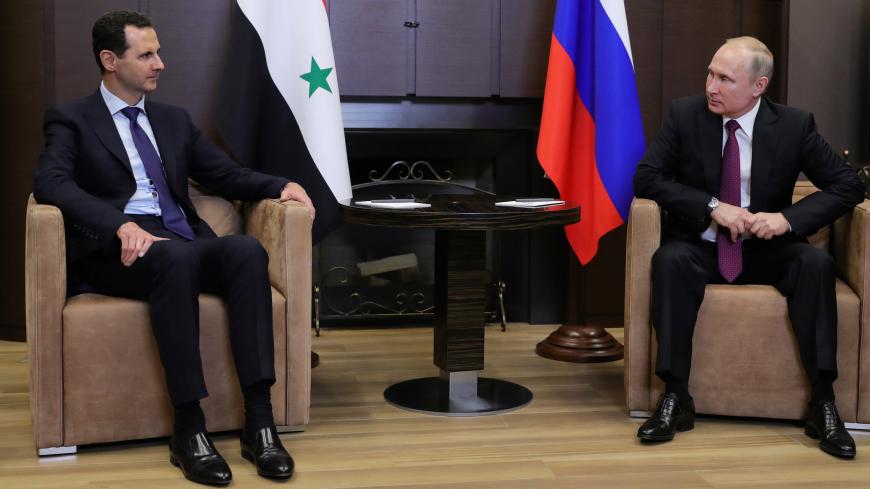 The summit in Warsaw, Poland last week “to promote a future of peace and security in the Middle East” made clearer, and more complicated, the divisions between the United States and Europe over Iran, as Laura Rozen writes. If the point of the summit was to bring the United States and its allies closer on Iran, the meeting was at best a non-event and more likely a flop. If it was to scold Europe to highlight, from a US perspective, how its allies are flagging in their commitments, as Vice President Mike Pence laid out in his speech at the summit, then mission accomplished. Maybe.

Unfortunately, there may have been a missed opportunity in Warsaw to take advantage of a trend to reduce Iran’s presence and role in Syria, one of Washington’s top objectives. But it first requires some history and context.

When Hafez al-Assad was president of Syria, he had the knack for keeping creditors at bay. He got what he needed from Moscow and Tehran — arms, strategic depth, trade deals — but he held the strings. Assad had the touch for keeping potentially meddling powers at arm's length. Under the old man, it was a two-way street. When you dealt with Assad and Syria, you were on Assad’s turf. Former US Secretaries of State Henry Kissinger and James Baker came away from difficult engagements with Assad with wary respect for his formidable and often maddening negotiating style.

But the tables have turned, or so it seems. Under Hafez’s son, Bashar al-Assad, who became president after his father’s death in 2000, the creditors have seized the assets. Since the Syrian uprising of 2011, and especially since 2015, when Assad needed to call in the Russian and Iranian cavalries, the balance has faded from his dealings with Tehran and Moscow. Assad owes them too much, and they now have a lock, or so it seems, on the Syrian spoils. With all three countries under sanctions, there is little left to the imagination about the prospects for corruption and ghost deals in the tens if not hundreds of millions of dollars, all at the expense to the Syrian people — especially if the United States, the United Nations and the European Union are all on the sidelines during the post-conflict and reconstruction era.

When Bashar al-Assad deals these days with his Iranian and Russian interlocutors, he knows who they would like to see in his chair. Both countries have their candidates, and they know he knows who they are. As Russia and Iran have helped Assad reestablish control of most of Syria, however, he is now hoping to strengthen his hand and regain some elbow room for himself, but this is hard fought.

And in that score, the first order of business is loosening Iran’s increasing chokehold on Syria. Russia will be fine with its bases and military ties; Assad can live with that. But Iran, by its nature, seeks more. And a constellation is forming around the desire for a reduced Iranian presence. The United States, Russia, Israel, the Gulf states and Assad all want Iran to step back — all for different reasons and under different conditions. Even Hezbollah Secretary-General Hassan Nasrallah may want to bring his forces back to Lebanon soon if Tehran would give the word.

The Iranian people are, at best, mixed about a long-term presence in Syria. While “the Iranian economy has experienced structural shifts from an academic point of view, its fundamental deficiencies have prevailed despite ambitions of modernization,” writes Bijan Khajehpour. The US sanctions are taking a toll. Iranians may be more concerned about jobs and the price and scarcity of food and basic consumer goods than they may be about the defense of the holy shrines in Syria, a key popular justification for Iran’s intervention, as Mahsa Rouhi explains.

While US leaders lectured their European counterparts in Warsaw, Russian President Vladimir Putin was smoothing over the differences with his Iranian and Turkish counterparts in Sochi in the latest meeting of the bend-not-break Astana group, which remains the center of gravity for diplomacy on Syria. “The summit in Sochi reiterated a central trend within the Astana trio,” writes Maxim Suchkov, “that the previous gathering in Tehran exposed: Disagreements within the Astana trio persist, yet the three states continue to value their framework, which, in the absence of a better alternative, helps Moscow, Tehran and Ankara promote their own agendas and coordinate efforts in moving the course of action in Syria.”

With regard to Syria and Iran’s role there, the United States needs to consider ways to bring Moscow into the conversation. As we wrote back in July 2018, Putin “is not someone who works for free. If he believes he is helping Trump to achieve a responsible exit from Syria while assuring Israel’s security, this is big stuff, and the Russian president also needs a win from the art of the deal. For Putin, that means relief from at least some of the US sanctions on Russia.”

There are no illusions here about the political context of US diplomacy and sanctions on Russia. We are merely stating the obvious — there must be some give for the Russian get. If Washington has bigger fish to fry with Russia, such as in Ukraine, that makes sanctions relief impossible, then so be it. Sanctions, we had thought, are supposed to be a means to an end, not an end in themselves. With regard to Syria, there is simply no workaround for the United States in dealing with Russia if it wants to lessen Iran’s footprint. Otherwise, the Russia-Iran relationship, which has never been stronger, will only continue to grow, as we wrote here in August 2018.

With regard to Iran, the take here is that Iran is not going to “leave” Syria. As Nasser Hadian points out, Iran’s presence in Syria is “aimed at establishing effective deterrence and is justified as in principle being defensive and reactive in nature. In this equation, Iran’s establishment of effective soft and hard deterrence requires both soft and hard infrastructure.” For Iran’s revolutionaries, Hadian continues, Iran’s “presence at its core is the essence of Iranian power, which inherently expresses itself outwardly.”

But here too there could be at least the beginnings of a strategy, even if the United States is not willing to drop sanctions. The EU can be the good cop to Washington’s bad cop in dealing with both Russia and Iran. There are signs that some of Iran’s leaders might be willing to talk about a reduced presence in Syria. They can claim they have won the war by keeping Assad in power and are recommitting to domestic and economic issues. But they would need an economic carrot to complement the many sanctions sticks, perhaps around the INSTEX barter system set up by the United Kingdom, France and Germany for financial transactions with Iran. A first step should be Hezbollah’s withdrawal from Syria. If a combination of diplomacy, economic incentive and pressure can’t get Hezbollah out of Syria, then there is likely to be little movement on Islamic Revolutionary Guard Corps forces.

Another option is to encourage other Arab countries, led by Saudi Arabia and the United Arab Emirates, to create an economic and political counterweight to Iran in Syria, as is happening in Iraq, with the support of the United States. But here too sanctions on Syria may get in the way. We wrote last month that “as the Gulf states reconsider their relations with Damascus and Syria’s return to the Arab League, and as the United States looks to Saudi Arabia and the Gulf to finance Syrian reconstruction, a question will emerge regarding US and multilateral sanctions. Next week the US Senate will consider bipartisan sanctions legislation on Syria. More sanctions, however, could constrain regional and international efforts to support a Syrian transition and the country’s reconstruction, including initiatives of the United Nations and the World Bank. As it is with Iran, the United States could find itself boxed in, seeking exceptions to its own sanctions policies to allow allies to fund reconstruction.”

If Russia and Europe are unable to convince Iran to step back in Syria and Arab states are stymied in supporting Syrian reconstruction, as US President Donald Trump has called for, then Assad will have no choice but turn to his creditors. Iran and Russia will thereby further increase their equity in Syria and assure their lock on the spoils of reconstruction, adding yet another burden for the Syrian people.