Has Syria been a military success for Iran?

Iran was willing to negotiate its nuclear situation with world powers, but it wants everyone to know it is far from ready to abandon its strategic interests in the region. 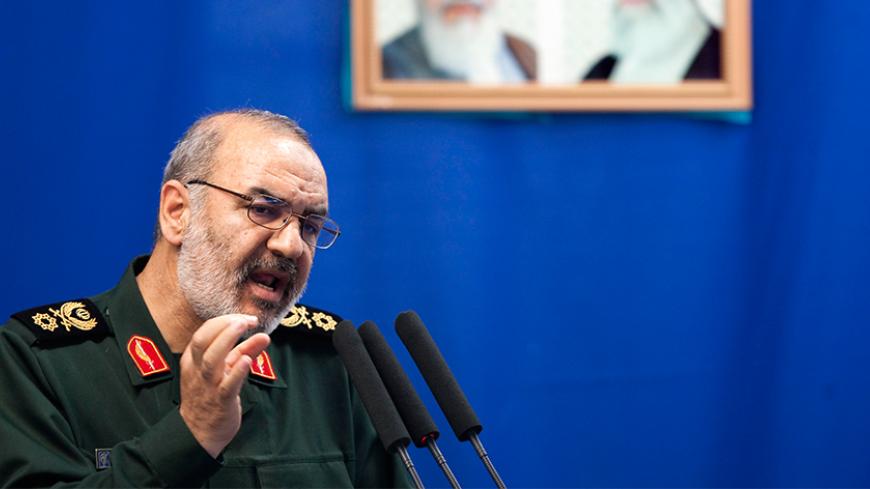 TEHRAN, Iran — Brig. Gen. Hossein Salami, Iran's deputy commander of the Islamic Revolutionary Guard Corps (IRGC), has made it known his country is ready to take on all comers and is stepping up its role in the Syrian war.

“We ourselves are dictating the new literature [and language] of Muslims’ struggle [against the West]. … Therefore, we should be ready to manage multiple direct, and proxy, wars,” Salami said at the National Civil Defense conference Oct. 28 in Tehran.

He also recently noted in a program broadcast by Iranian state television, “Our [IRGC] presence in Syria has increased in both quality and quantity.”

Through Foreign Minister Mohammad Javad Zarif, Iran is trying to reach a peaceful agreement with the world powers on Syria. However, it is simultaneously pursuing a strategy of engaging in direct military combat against its adversaries in Syria and Iraq. Despite widespread censorship, news about the deaths of IRGC members in Syria is reported extensively in Iran.

It is well known that IRGC members are present in Syria and have taken up an advisory role to President Bashar al-Assad's military. However, Iranian officials have repeatedly denied that Iran is sending military aid. Yet, in a report aired by Iran’s Arabic-language Al-Alam news network, images of Iranian Safir military vehicles, anti-bunker cannons, multiple-launch rocket systems and Iranian-made armor could be seen briefly on the southern fronts of Aleppo.

In view of recent disclosures by Salami, it appears the Syrian army during the past few months has been relying on IRGC advisory assistance to fundamentally change its military strategy and combat organization.

Syria has a conventional army that relies on Soviet and Russian combat doctrines. In this regard, the roles and strength of artillery and armored units are quite apparent. However, since the armed opposition has been equipped with TOW anti-tank missiles, the weaknesses of the Syrian army have become more visible. Therefore, it appears that senior Syrian army commanders have decided to employ the Iranian combat doctrine.

The type of weapons and forces Iran is sending to Syria indicates that we are about to see a changed Syrian army. For instance, Iran has not sent its air force or missile and armored units to Syria. Instead, Iran has dispatched tactical weapons such as Safir vehicles, Zelzal tactical rockets and special brigades such as Fatemiyoun and Hezbollah of Lebanon. It appears that the approach favored by IRGC commanders has been more effective than that of its Syrian counterparts. These days, it is evident that Iranian forces, alongside Hezbollah, Fatemiyoun and the Syrian military, are taking part in large-scale offensive operations with the support of the Russian air force. The target is armed opposition in cities such as Aleppo, Homs, Damascus and Qalamoun. So what is Iran’s active strategy in Syria and what are that strategy's characteristics?

Since the 1980s, Iran has been well aware of the difference between fighting against a conventional army and fighting a civil war. This is why recently slain Gen. Hossein Hamedani, who had participated in the war with militants in Iranian Kurdistan, was chosen to be sent to Syria. Indeed, the independent and “mosaic” nature of the advisory unit of the IRGC’s foreign operations branch — the Quds Force — as well as the Fatemiyoun, Hezbollah of Lebanon and Defenders of the Shrine Brigades shows that Iran has indeed implemented a so-called mosaic strategy in Syria. This strategy, which has been implemented by the IRGC in Iran, refers to a flexible and layered tactic with divided command and control. The aim is to “strengthen unit cohesion at the local level and give commanders more latitude to respond to potential threats.”

The Syrian army has experienced extensive sieges in various areas, including Aleppo Prison. These experiences have shown that its units are not capable of carrying out offensive and defensive operations. At the same time, Hezbollah forces as well as the Fatemiyoun have made it apparent during numerous conflicts, such as the one that took place in the Zainabia region of Damascus, that by using a mosaic strategy, they can resist and maintain defense lines without having to depend on backup units. Therefore, it is probable that instead of continuing with the traditional style of dividing the army into infantry, armor and artillery, the Syrian army has now decided to use a combination of infantry forces, rangers, armor and artillery forces in each region alongside independent Hezbollah and Fatemiyoun battalions as well as Iranian commanders.

It is well known that there are Afghan, Iraqi, Iranian and Lebanese forces present in Syria. However, Salami has made it clear that Iran has based Pakistani forces in Syria as well. The armed forces that fight against Assad’s army have one thing in common: Their members come from a variety of nationalities. Because of the fatwas issued by the Sunni ulama (religious authorities), Muslims from Indonesia to the United States have gone to Syria to take part in what is referred to as a holy war, or jihad. It appears that the Islamic Republic is now also operating based on a similar fatwa and is organizing Shiite forces from the region and sending them to Syria to take part in a jihad, too. Such a scenario, if public opinion accepts it, can make up for the lack of human resources in the Syrian army and also lend religious legitimacy to Assad’s side.

Iran views the United States, Europe, NATO, most Gulf Cooperation Council states, Egypt and Jordan as direct threats. On the other hand, Iran also considers the cooperation of its neighbors such as Azerbaijan, Pakistan, Turkmenistan and Turkey with the United States and the West as a potential threat. Bearing in mind the UN Security Council sanctions on Iran and the stalled delivery of Russian S-300 air defense missiles, it is evident that Russia does not have a good record when it comes to Iran, either.

Therefore, looking at the situation from Tehran’s point of view, the only reliable allies of Iran in the region are the Iraqi and Syrian governments, as well as Hezbollah. Geopolitically, the survival of this “Shiite Crescent” is dependent on the survival of Assad’s Alawite regime. While willing to sit down and negotiate with the world powers over its nuclear program, Iran is not willing to endanger its vital and strategic interests in the region. Therefore, just as Salami noted, Iran is capable of participating in direct, and proxy, wars in the future.