Russia, Iran in tug of war over Syria military reform

Moscow and Tehran have disparate views on how the Syrian military should be reformed. 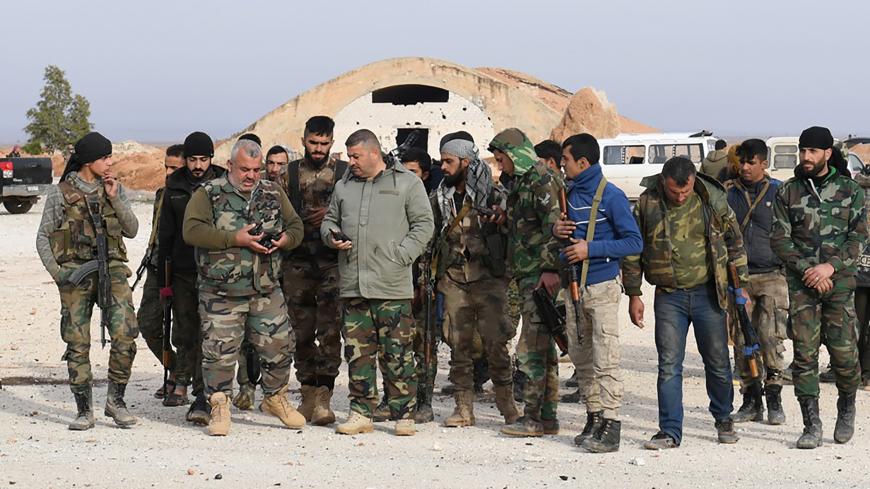 The ongoing military assault in Idlib — spearheaded by the Syrian army and supported by Russia — may be the first significant military operation in which pro-Iranian militant groups have not taken part. The main attacking units of the government forces are pro-Russian structures within the Syrian army: the Tiger Forces division, led by Suheil al-Hassan, and Zayd Salih’s 5th Volunteer Assault Corps.

The absence of pro-Iranian troops in the fighting zone in Idlib entails a number of new speculations over the controversies between Russia and Iran in Syria.

Asharq al-Awsat, for instance, mentioned an alleged proposal that the United States and Israel could present to Russia and Syria. The proposal involves the lifting of sanctions and the recognition of Bashar al-Assad’s government in exchange for Iranian military forces leaving Syria. Nasr al-Hariri, the head of the Syrian High Negotiations Commission, told Asharq al-Awsat that, although Russia stood by Iran in backing the regime, Moscow realizes that its two partners — Iran and Assad — are burdens, particularly due to US sanctions. The only way to obtain security, stability and a political solution in Syria, he said, is through the withdrawal of Iranian military forces.

Russian officials dismissed these statements, as did the Syrians. Butrus al-Marjan, the chairman of the Syrian parliament’s International Committee, told Russian newspaper Izvestia that he would not refuse Iranian military support or demand Iranian withdrawal from Syria, even if the United States agreed to lift sanctions.

Moscow is also interested in seeing Iran’s military influence in Syria reduced, though it realizes such a process will be lengthy and effortful. Moreover, Russia acknowledges that Iran is deeply rooted in the Syrian military and security apparatuses. If the structures Iran created in Syria are not replaced with pro-Russian equivalents, the combat effectiveness of the army would be severely diminished. In order to remove Iranian influence from the army structures, those structures must be reformed: first by integrating the pro-regime militia squads, which make up the majority of Assad’s troops, into the regular Syrian army. Next, their staffing and management structures should be updated to meet modern-day requirements.

However, as of yet, Iran is the only party effectively working to merge militias with regular army divisions. As a result, Iran is erecting even more obstacles to the separation of its proxy structures from the government's army. Therefore, to minimize Tehran’s influence, if not immediately then in the long term, Moscow needs to seize the reform initiative for Syrian security and military systems and push its own agenda forward.

Yet Russia will face some serious challenges in this regard. Only two armed structures in Syria can now be considered pro-Russian or capable of becoming Moscow’s footholds in the conflict: the aforementioned Tiger Forces and the 5th Assault Corps.

The Tiger Forces are the most effective structure of the Syrian army, which, with Russian support, replaced the pro-Iranian 4th Armored Division and Lebanese Hezbollah as a main assault formation. Syrian air force intelligence initially formed the Tiger Forces as a special task force. However, it became a peculiar attacking unit of the Syrian army after it was reinforced with heavy weapons. Russia significantly contributed to this process. The Tiger Forces are basically an umbrella structure with two brigades made up of 24 loosely connected groups, most of which possess a strength level between a company and a battalion. While the Tiger Forces’ offensive units roughly number 4,000 infantry members plus an unknown number of artillery and armor crewmen, the total number of affiliated individuals is likely much higher.

The 5th Assault Corps, despite the high expectations the Russian military had for it, has yet to become an integral military structure. It comprises 25,000 soldiers and eight brigades of both servicemen from disbanded militia groups, and affiliated militants who are still autonomous and do not officially belong to the Corps, but act under the Corps’ command and are armed by the Corps.

The Corps is less efficient and combat capable than that of the Tiger Forces. A Russian military source told Al-Monitor that during the current operation in Idlib, Tiger Forces commander Hassan complained to the Russians about the low resiliency and fighting capability of the 5th Corps.

The 5th Assault Corps comprises the Baath Brigade and soldiers from the Desert Hawks Brigade and Sea Commandos. Some Syrian private military companies disbanded in 2017 and later “dissolved” into the corps as well. Al-Quds Brigade from Palestine and the ISIS Hunters — the armed unit of Syrian Christians — are under the command of the 5th Corps, but they are not officially considered members. Moreover, the corps' 8th Brigade was staffed by militants from the south who had accepted the conditions of reconciliation with the regime. It is possible that a similar brigade will be created in Suwayda province.

Russia is conducting a multi-faceted development of the Tiger Forces — an umbrella structure for field squads of Syrian air force intelligence — and the 5th Corps, which is a conglomerate of various militias. Yet Syria's air force intelligence remains under Iranian influence. Thus, these forces cannot be seen as role models for reform, at least in the Russian view, or become the foundation for the future Syrian army.

Tehran, meanwhile, is suggesting a more coherent scenario of reform for Syria's armed forces than Moscow. Iran advocates either the creation of new military formations or the expansion of existing army divisions by absorbing irregular groups.

For instance, Maher al-Assad’s elite 4th Armored Division is gradually incorporating efficient Shiite groups, both local and Iraqi. Those groups will become the division’s battalions, and the soldiers will receive official military personnel status. Factions like Iraq's Liwa al-Imam al-Hussein, the Syrian branch of Harakat Hezbollah al-Nujaba and Sayf al-Mahdi have already merged with the division. The 4th Armored Division rivals the 5th Corps in its enlistment of armed militants who have agreed to reconcile.

Iran also sees the expansion of its influence in Syria’s Republican Guard as a desirable course of action. For example, the 105th brigade of the guard includes Liwa Abu al-Fadl al-Abbas, an Iraqi Shiite faction. Another brigade formed the foundation of the Guard’s 30th division, when various groups were lumped together, including the so-called Local Defense Forces (formed by Iran in Aleppo).

Nevertheless, Russia still has an opportunity to implement an alternative plan. Some experts suggest the formation of three operational commands based on the remaining staff of the Syrian army's corps. These could be further provided with territory-based command rights over all regular and militia troops under their authority. The latter, for their part, should be grouped around the staff of operating divisions. While Iran works on the “Praetorian Guard” — the Republican Guard and the 4th Armored Division — it’s unable able to conduct such reforms across all of Syria’s army. This represents a chance for Russia to seize the initiative and create regional and division-based operation command structures that could command authority over all militias.

In this case, Russia could also facilitate the disbanding of pro-Iranian factions and maintain those that Moscow can rely upon. The brigades of the 5th Assault Corps could join the regular divisions of the Syrian army as separate pro-Russian formations. Similarly, the separate tactical groups of the Tiger Forces could be included in the same territorial division commands, reinforcing Russian influence in each.