An IRGC commander says the elite Saberin Unit has provided Iran with security on its borders. 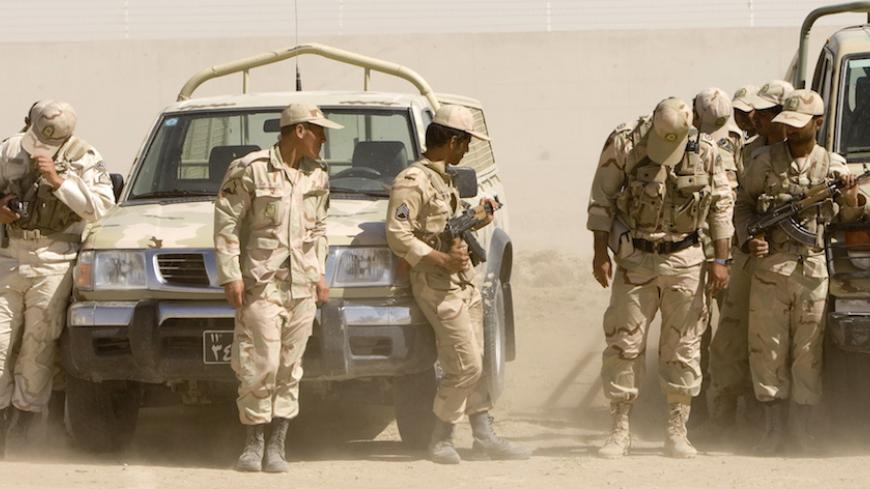 Iranian anti-narcotics policemen protect themselves from blowing sand at a police barracks on the border with Afghanistan near Zabol, 1,605 kilometers (1,003 miles) southeast of Tehran, May 20, 2009. - REUTERS/Caren Firouz
Arash Karami
@@thekarami
February 18, 2016

“Nearly 60% of the other side of our border is not controlled by the neighboring country, and the border is in the control of terrorist elements,” he said. At a Feb. 18 commemoration for the IRGC’s elite Saberin Unit, which is tasked with fighting terrorist groups on Iran’s borders as well as fighting in Iraq and Syria, he described the region as “turbulent and chaotic."

Pakpour said there is little security in a number of cities on Iran’s western border with Iraq. According to Pakpour, near the northwestern Iranian city of Sardasht, the Kurdistan Workers Party (PKK) has a presence, and there is “no news” of Iraqi troops. He added, however, that there are also terrorist groups on Iran’s side of the border.

On Iran’s eastern border, Pakistan has “no effective presence," and there are terrorist groups there, Pakpour said. He said that elements of the Taliban and the Islamic State have a presence on the border with Afghanistan and the government in Afghanistan “has no rule” over the border.

Pakpour said that from 2007-2009, Iran often fought with terrorist groups inside its borders and a number Iranians were killed. One of the more notable terrorist attacks was in May 2009 when 20 people were killed in an explosion at a Shiite mosque in the Sistan-Baluchistan province on the Pakistan border. In October 2009, at a conference for ethnic and religious unity in southeastern Iran, a suicide bomber killed the deputy commander of the IRGC ground forces, Nour-Ali Shushtari. While terrorist attacks in the past were claimed by the militant group Jundullah, a relatively new group calling itself Jaish al-Adl has been carrying out attacks in recent years. Iran claims that these terrorists cross the border from Pakistan, attack Iranian security personnel and then retreat back into Pakistan.

Since the Saberin Unit took over security at the northwestern and southeastern borders, there has been stability inside Iran's borders, Pakpour said. However, a number of soldiers in the unit were killed in the process.

On Saberin’s role in Iraq and Syria, Pakpour said that the unit's elite forces are “advisers sent to the region so that violations against shrines do not take place.”

"Our martyrs traveled thousands of miles away from our borders to confront [enemies],” he said, adding that had the Saberin Unit not gone to Iraq, Iran would have been fighting terrorists on its western borders. “Our presence in defending shrines is to destroy the enemies there so that they do not reach our borders.”

According to Intelligence Minister Mahmoud Alavi, there have been a number of plots foiled in the last 2½ years. Alavi said Feb. 17 that 1,500 individuals who had planned to join terrorist groups were prevented from doing so. He also added that dozens of attacks were planned, including ones on metro stations, bazaars and mosques in cities such as Zahedan and Shiraz.