Iran's political leadership must move quickly, and non-ideologically, to resolve the current water use crisis and avoid the possibility of mass migrations. 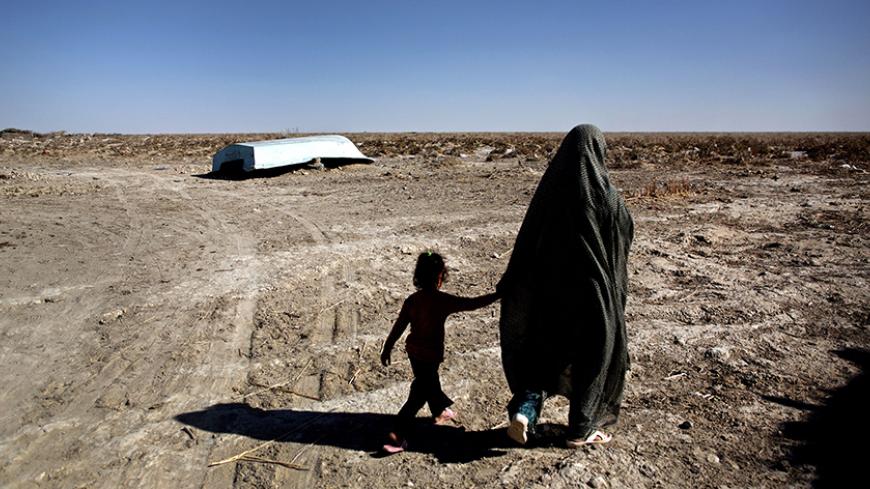 An Iranian woman walks with her daughter past an abandoned boat in Sikh Sar village at the Hamoon wetland near Zabol town, in the southeastern province of Sistan-Baluchistan, bordering Afghanistan, Feb. 2, 2015. - Getty Images/Behrouz Mehri

Al-Monitor reported in May 2014 that Iran faced an unprecedented water shortage, and now, a year later, the crisis has deteriorated to the point of raising the alarm that a large number of Iranians might be forced to migrate, including externally, to access water if workable solutions are not found in the next few years. Addressing this critical issue will require Iranian authorities to make crucial strategic decisions.

To appreciate the depth of the crisis, one can start with a closer look at statements by Issa Kalantari, adviser to Vice President Eshaq Jahangiri, former minister of agriculture and head of the task force addressing the Urmia Lake crisis. Kalantari addressed a group of experts and reporters April 25 to highlight the various aspects of the ongoing disaster. He charged the country’s politicians with being in denial of the true dimensions of the water crisis and outlined some of the key issues:

Recent analyses reveal that seven of the country’s 32 provinces are classified as experiencing “water shortage” while 13 face a “critical water situation.” According to the same analyses, none of the provinces — including in the Caspian Sea region, which enjoys vast water resources — can be categorized as having sufficient water basins. As such, water management has become the top priority for the government.

In addition to establishing a special task force for Lake Urmia, the administration has initiated major campaigns to supply desalinated seawater to cities bordering the Caspian as well as to southern population centers. In tandem with these initiatives are a major push for higher efficiency water consumption and major investments in wastewater management and treatment. The objective is to use as much wastewater as possible for agricultural purposes so freshwater can be allocated for residential and industrial use.

The government organized a national conference, held in March in Shiraz, to help address the water issue. A number of proposed solutions were introduced that will not only require massive investments, but also different approaches to core strategies in the agricultural and food security sectors.

The key to managing Iran’s crisis is restructuring water use in the agricultural sector. Agriculture currently consumes 90% of the country's water resources, compared to the international benchmark of 70%. The agricultural sector is significant for Iran on two levels: employment opportunities (it employs roughly 20% of the workforce while contributing to only about 9% of the country’s gross domestic product) and food security (the core objective of which has been self-sufficiency).

Last year President Hassan Rouhani instructed the Ministry of Agricultural Jihad to focus on achieving self-sufficiency in five strategic crops: wheat, rice, sugar, oil seeds and cotton. Experts agree that a change in agricultural strategy may not necessarily lead to decreased levels of employment in the sector. A revamped set of crops could reduce water consumption while also maintaining employment activity levels. Regardless, the reduction in water consumption will almost certainly compel Iran to reduce production of such key crops as wheat and barley, hence hampering the target of self-sufficiency.

Adding environmental sustainability and the need for industrial development to Iran's already conflicting strategic equation underlines the complexity of the strategic choices it must make. Nonetheless, the government will have to address this issue quickly and efficiently. In fact, the urgency of the challenge is as great as that needed in addressing energy consumption patterns in the past few years.

Of note, one proposed approach is for the government to implement the final phase of subsidy reforms and dedicate the freed up resources to making the investments needed in the water and agricultural sectors. This would make fuel price adjustments more palatable to the elite as well as the general public, lead to energy savings (as a result of higher fuel prices) and also provide funding for major investments in the water and agricultural sectors.

Once the financial resources are assembled, the government should elevate water management to the level of environmental protection, establishing a department headed by a vice president to prepare the ground for an integrated water management system. At the moment, water management is a subsection of the Ministry of Energy, which regulates power generation and thus water, including wastewater. A new department would produce the authority needed to more efficiently manage the complex set of stakeholders and interests and develop water strategy.

This self-inflicted water crisis is one of the main challenges Iran faces on its path to becoming a developed nation. It is an issue that can only be resolved through expert approaches free of ideological and political agendas. It is high time to make these strategic decisions.