Why drought is a national security issue in Iran

Mismanagement of water resources combined with climate change threaten the futures of coming generations of Iranians. 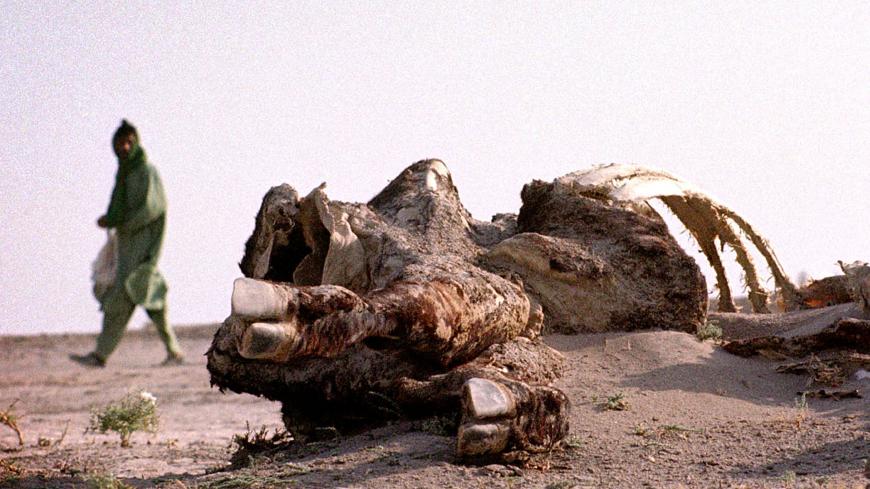 A man walks past the partially sand-covered carcass of a cow in the dried-up bed of the Hamoon lake, Iran, July 17, 2001. - REUTERS/Caren Firouz

Iran is arid with low levels of annual precipitation and limited water resources that have been shrinking. Drought has gripped most parts of the country for at least a decade now, and precipitation has decreased drastically to its lowest level on record in 50 years. However, the situation is expected to get even worse. The latest figures by the World Resources Institute predict the rise of water stress globally in the next two decades due to climate change. In particular, most parts of the Middle East, including Iran, are projected to face high-risk water stress.

“Over 90% of the country’s population and economic production are located in areas of high or very high water stress. This is two to three times the global average in percentage terms, and, in absolute numbers, it represents more people and more production at risk than any other country in the Middle East and North Africa,” Claudia Sadoff, director general of the Sri Lanka-based International Water Management Institute, told Al-Monitor.

Iran’s share of global fresh water is 0.3%, while it is home to 1% of the world’s population. Experts put the country’s renewable water resources at almost 110 million cubic meters (89,000 acre feet), although some others say it is as low as 88 million cubic meters. Experts also say that while the optimal situation is for 40% of renewable water resources to be consumed, at present this number is nearly 90%.

However, the overconsumption of water resources is not new and has been taking place for several decades now, due in large part to economic development and a population boom. An opinion shared by many Iranians that water is God-given wealth has further resulted in its overconsumption.

The growing population has used more water, while renewable water resources remain unchanged. Agriculture is blamed for much of the water overconsumption as it uses 92% of the country’s freshwater; Iran's traditional irrigation systems have a high wastage of water, and there is little to no concrete supervision of how much water farmers consume. Water consumption by the agricultural sector has an efficiency of 30%, nearly half the world average.

The situation created by population growth, the inefficient agricultural sector and the development of water-consuming industries in the country’s dry regions has been aggravated by a factor blamed as the root cause of the current water scarcity: mismanagement over long periods of time. Experts say that the water crisis began more than 50 years ago, and that it was mismanagement that intensified it in the last couple of decades. The experts say the authorities initially ignored the fact that water resources are limited in Iran and adopted policies in clear negligence of their future repercussions. As part of those policies, large numbers of dams were built across the country, changing the geography of water resources and leading to the shrinking of wetlands and lakes such as the saltwater lake Urmia.

Also, efforts to achieve food self-sufficiency — which began after the 1979 Islamic Revolution — were intensified, making the country more reliant on agriculture. As an example, yearslong efforts were taken to attain self-sufficiency in wheat production, resulting in more extraction of underground water to plant more wheat.

Water specialists such as Sadoff believe that Iran has to modify the way it manages water resources to make them last for a longer period.

“To manage its water risks, Iran can build on its long history of water resource management and incorporate new information technologies and tools to better understand and forecast water availability,” she told Al-Monitor, adding that the country must modernize its irrigation systems and fix leaking pipes in a bid to lessen wastage.

Some of these measures have already been taken by President Hassan Rouhani’s government as part of programs to address environmental issues since he took office in August 2013.

Rouhani's government halted the construction of 14 dams in various provinces and instead focused on setting up water distribution networks through underground routes to reduce evaporation. As part of other measures, the government imported modern irrigation equipment, obliged farmers to install water meters and stopped issuing new permits for water conveyance. It also shut down hundreds of illegal wells and increased the numbers of both rural and industrial treatment plants, while encouraging farmers to plant crops such as saffron and pistachios, which consume less water.

The president has also spoken of a project by the private sector to desalinate southern waters to transfer them to central provinces.

“Due to water shortage, we have no other way but to desalinate the water of the Persian Gulf and the Sea of Oman,” Rouhani told reporters during his trip to southern Hormuzgan province March 1.

However, critics of such a project have pointed to its high cost and environmental effects as reasons to reject it. They also say the measures taken by the government would only resolve existing problems temporarily while more serious actions are required for a lasting solution.

“If we fail to reduce water consumption by 20% within the next five years and by 40% within 15 years, Iran’s stability will be in danger. That will be a very difficult task,” Mohammad Hossein Karimipur told a conference on National Water Day on March 2.

With recent clashes in the central province of Isfahan over water shortages, experts warn that the issue has already turned into one of security. They also warn of mass migration as well as serious socio-economic and political repercussions if the problem is left unresolved. As a catalyst for efforts to tackle the crisis that the government has branded as one of the most worrisome issues, the government must stress to the public the urgency of reducing consumption and conserving water to prevent Iran from turning into a barren desert.