The Iranian government needs to find the balance between consumption and resources. 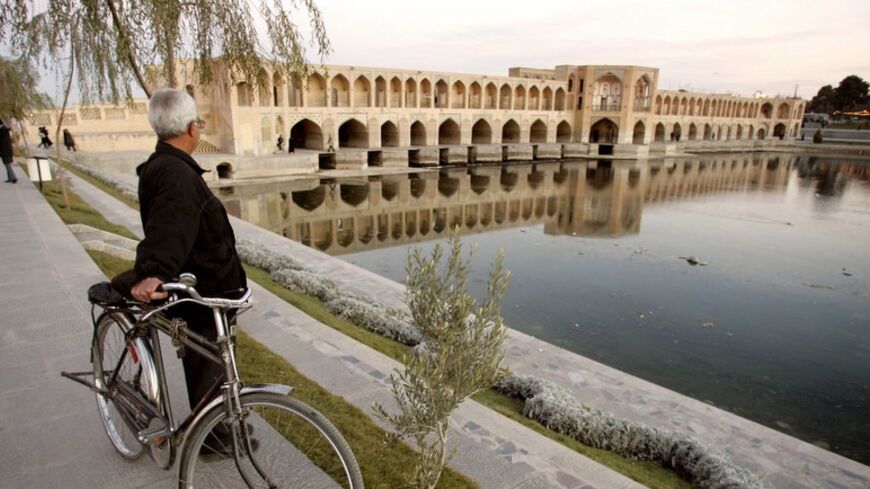 Over the past few months, Iranian officials and experts have underlined the gravity of the water shortage in the country. Last year, Al-Monitor looked at the social backlash related to the scarcity of water resources in the country, but this article focuses on the root causes of the problem and what could be done to limit the depth of the crisis.

In December 2013, Hamid Chitchian — head of the Ministry of Energy, which is in charge of regulating the water sector — stated that the sector's situation had reached “critical levels.” Chitchian correctly established that past approaches, which mainly focused on constructing dams and trying to increase the storage capacity, would no longer be appropriate remedies. In fact, total storage capacity behind the country’s many dams amounts to 68 billion cubic meters, whereas the water potential of the country’s rivers totals 46 billion cubic meters per annum.

More recently, former Minister of Agriculture Issa Kalantari said at a gathering in Ardabil that water shortage was “a major threat to the country” and that careless past consumption had depleted the country’s water resources.

The fact is, a significant section of the country’s water shortage could be resolved through improved water management schemes. Presently, 92% of the country’s water resources are used for agricultural purposes. In many cases, water resources fit for residential or industrial use are utilized in the agricultural sector, which is inefficient. Evidently, even a 5% improvement of water utilization efficiency would explode the amounts of reserves available for residential and industrial use.

Challenges to increasing efficiency in the agricultural sector include the presence of too many decision-making bodies and a lack of strategy. The critical situation in Lake Urmia is a reminder of how mismanagement and inappropriate policies can lead to disasters with regional and national implications. I discussed the need for reform in the agricultural sector on Al-Monitor before, but the water and wastewater sector is also in need of reform and new approaches to improve the situation in the country.

Incidentally, water management affairs inside the Ministry of Energy can be considered one of the better managed entities within the country’s executive branch. However, the ministry and its efforts in the water sector are heavily overshadowed by the stakeholders in the agricultural sector. Over the past decade, the institutional arrangements within the Ministry of Energy have been driven by the desire to increase decentralization, yet it is not clear whether decentralization has helped improve the overall performance.

At the central level, besides regulatory policies designed by the ministry and other governmental offices, technical issues are attended to by the National Water and Wastewater Engineering Company (NWWEC). At the regional level, there are water boards responsible for capturing and transmitting raw water that is then treated and distributed by provincial or city water and wastewater companies. The municipality or state-owned water and wastewater companies are able to manage their day-to-day operations with a measure of autonomy, however, they do not control their own investment programs and, therefore, have limited scope to improve investment and operating efficiency and the level and quality of service. Moreover, the water and wastewater companies have to follow an organizational model developed by the NWWEC and cannot select a model that would be more appropriate for their particular situation.

Consequently, most towns and cities end up utilizing the prevalent models from large cities and provincial capitals even though the situations are very different due to geographical and social realities. Furthermore, the overlap of interests between the agricultural sector, municipalities and industries creates a unique situation in each region that requires tailor-made approaches.

As such, the success of water resource management in individual provinces and cities fully depends on the relative power of the local water and wastewater companies; their ability to mobilize funds for investments; and its bargaining power in diverse sectors (industry, agriculture and municipalities). Some regions are overwhelmed by the challenges of capturing and treating water resources, whereas other regions are in a much better position.

Increasing the complexity of the current situation is the negative impact of agricultural, industrial and residential wastewater on the country’s primary resources. According to Mansour Ghotbi Sarabi, water expert in the Ministry of Agricultural Jihad, 75% of the country’s drinking water is derived from underground resources, however, “these underground waters are subject to heavy pollution by agricultural, industrial, medical (hospital) and residential wastewater.”

Evidently, the high level of pollution increases either health risks or the cost of treatment, as most cities endeavor to provide piped drinking water for Iranian households. Notwithstanding, considering the disparate financial resources of different water and wastewater companies, one can imagine that water quality would suffer in many regions. Consequently, in terms of water quality (similar to other development indicators) Iran is faced with an unjust distribution of resources.

Experts such as Ghotbi Sarabi believe that the only remedy for the current crisis is to create an integrated water management system and to put one entity in charge of managing the country’s resources. He sees the core problem in the traditional approach to water management, stating: “Deploying the traditional system converts about 50% of the urban and rural drinking waters to wastewater.” He defines a modern integrated management system as a process that “considers all underground and surface waters from their origin to their point of utilization quantitatively and qualitatively and engages all consumers, producers and stakeholders in an integrated manner.”

The above outline indicates the complexity of the situation. Iran needs to move toward decentralization to be able to take regional, geographical and social conditions into account. Alternately, there is a need for integrated water management as the actions of each stakeholder have direct and indirect impacts on the other players. Clearly, there is a serious need for a comprehensive strategy, not just on how to use water resources, but also on the needed institutional structures.

Some experts argue that the country should start bottling drinking water and reducing the quality of piped water to “hygienic” water, which could change the cost structure for water and wastewater companies. Others focus on improved wastewater systems and utilization, for example, in the agricultural sector. However, the disparate quality of wastewater treatment has damaged agricultural production in some regions.

Whatever the Iranian decision-makers come up with, the top priority is to create a balance between consumption patterns and resources available. Otherwise, the country will sink deeper into a water crisis in the next few years. Maybe a segment of the effort that has been adopted to increase energy efficiency through subsidy reforms and other initiatives should be diverted to water consumption. Certainly a major effort will be needed to draft the appropriate strategy in managing the water sector, both in institutional as well as in political terms.