Egypt’s Nile water pollution rates are alarming, and people and natural life are being affected, while the efforts on the part of the government to fix the situation remain questionable. 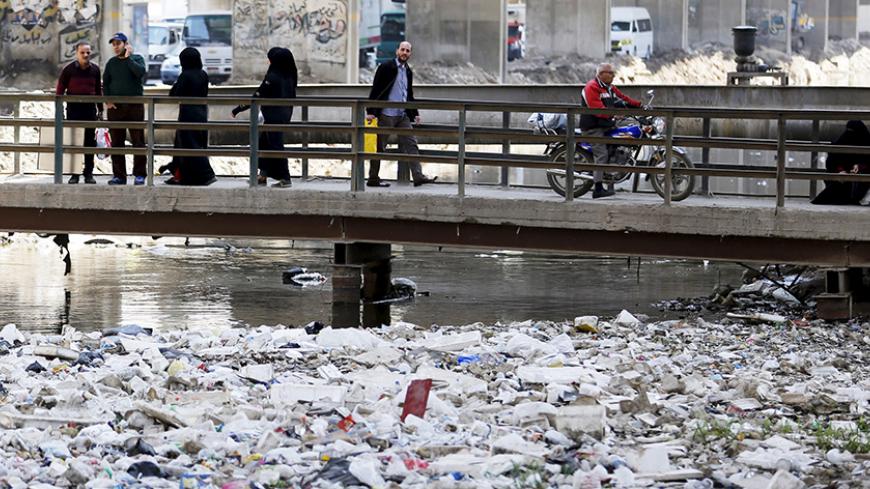 People walk across a bridge, surrounded by litter and waste, across a canal connected to the Nile River in Cairo, on World Water Day, March 22, 2015. - REUTERS/Amr Abdallah Dalsh

CAIRO — An intensive media and political momentum is taking place in Egypt in regard to the conflict with Nile headwaters countries over securing Egypt’s annual share of the Nile waters. At the same time, the pollution of the Nile River remains a pending issue that is being underscored in Egypt with every water poisoning incident caused by the dumping of hazardous waste in the river. The debate usually ends when the government reassures the public, and emphasizes that the water is safe and suitable for human consumption, without establishing long-term policies to resolve the crisis.

On April 22, a barge managed by an Egyptian army-owned company capsized in Upper Egypt, spilling 500 tons of phosphate. In the two weeks following the incident, the armed forces worked to recover the barge and clean the Nile River of phosphate. Hossam Moghazy, the minister of water resources and irrigation, said in a statement, "The entire spillage was removed; maybe there is still some sediment, but it is neither infectious nor harmful."

This is not the first incident of its kind. The Ministry of Environment has recorded several pollution incidents in the Nile waters: the leakage of wastewater in the area between the High Dam and Aswan reservoir, the dumping of dead animals and the release of industrial solid waste.

The Egyptian parties concerned with the Nile lack a comprehensive understanding of the quality of the Nile waters, despite the many incidents of pollution from Aswan to the Damietta and Rosetta branches; there are only a few official reports on pollution incidents and the deterioration of the water quality in specific locations in the southern governorates.

Although a supreme committee for the Nile River, under the tutelage of the prime minister, was formed during the Hosni Mubarak regime — and although river water protection measures against pollution were partly tended to — the responsibility for the water management of the Nile in Egypt is still distributed among three ministries: the Ministery of Water Resources and Irrigation, which is responsible for the distribution and delivery of water to agricultural lands and farm water that is often directly discharged with pesticides into the river; the Ministry of Housing, Utilities and Urban Development, which is in charge of delivering water to the drinking water and wastewater treatment plants; and the Ministry of the Environment, which is in charge of monitoring the river's water quality.

Kareem Khaled, a water-quality researcher at the University of Duisburg-Essen, spoke to Al-Monitor about the water quality in Egypt. He said, “The absence of a single administrative body in charge of water management and quality improvement from the High Dam to the riverbed, and up to the point where it [water] is delivered to people's homes, is the reason behind water pollution in Egypt.”

Khaled added, “The state of the Nile water still needs to be precisely and scientifically defined, and we need to find out what pollutants are in the water. The river is subject to all forms of pollution, the most dangerous of which is the untreated, solid industrial waste, which is causing an accumulation of heavy metals in the aquaculture and drinking water, and therefore causes many health problems.”

Based on the findings of the studies he conducted, Khaled said, “The most dangerous pollution rates are found in Egypt’s Delta region. In most of the Delta villages there is high population density and weak sanitation services — or lack thereof. The use of untreated water for irrigation is another threat affecting the quality of agricultural products.”

Although officials in charge of drinking water in Egypt say the water is safe and suitable for human consumption, based on their analyses of the quality of the drinking water, media reports indicate that water poisoning incidents continue to exist because of polluted drinking water.

“The water samples are often taken right from the exit pipes of the drinking water stations. Yet the water may get polluted while being delivered to homes because of the deteriorated water distribution networks and pumping stations. Water chlorination is used by some drinking stations to kill the harmful bacteria. This process, however, causes health problems,” Khaled said.

The negative impact that the deterioration of the water quality has is not only limited to citizens’ health. Fish die in large numbers from poisoning because of the high levels of ammonia and lead, as happened in January in the Rosetta branch in the Nile Delta.

The minister of the environment, Khaled Fahmy, told Al-Monitor, “The government is adopting strict measures and penalties to prevent hazardous materials and pollutants from being dumped or leaking into the Nile.” He said, “The Nile water is completely safe and factories are subject to periodic inspections to make sure that the water is treated before being dumped into the river. We have started to take measures to review the river’s water transport system and identify the hazardous materials that cannot be transported across the river.”

He added, “Dumping waste into the river does not mean that the water has become toxic.” He justified this statement by saying, “The industrial waste dumped into the Nile is not directly delivered to the drinking water stations. The Nile has the ability to break up and disperse the pollutants.”

Fahmy admitted that the Nile water pollution problem “is still complex and has been going on for over 30 years. The state is trying to find solutions to improve the river water quality.”

The water pollution issue remains unresolved, at a time when Egypt does not have sufficient water resources. Technical reports conducted by the Egyptian Center for Economic and Social Rights indicate that Egypt may become a water-scarce country by 2025, particularly since it consumes far more water than it can replenish. In addition to other problems that weigh down on the country — such as population density and the dilapidated pipe network, which alone is behind 35% of wasted water every year — Egypt is the world's largest wheat importer, because there is not enough water to grow the crops locally.