Egypt discharges extra water from the Nile to help its power shortages, yet this policy might lead to a drought if it's not properly executed. 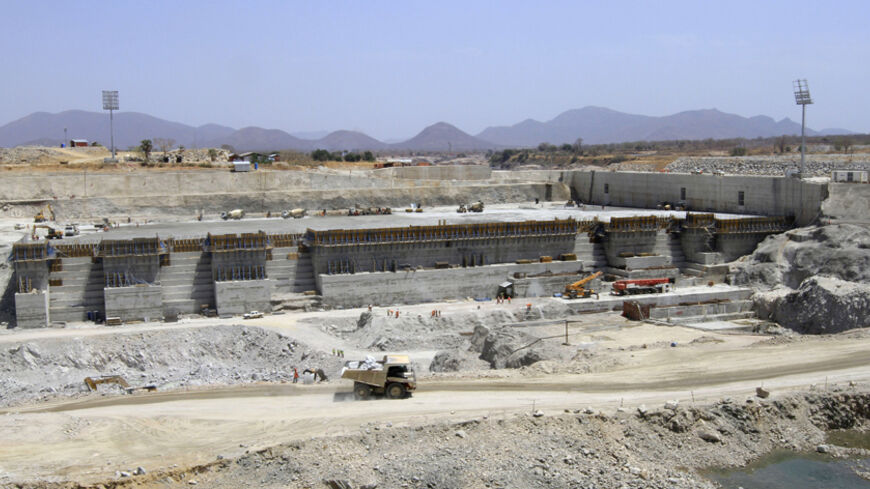 CAIRO — Despite the need to store extra water from this year’s floods to activate the Grand Ethiopian Renaissance Dam in September 2015, the Egyptian government had to discharge extra amounts of water — other than the amount that is released from the Aswan Dam on a daily basis — to generate more hydroelectric power to solve the power cut crises. The Renaissance Dam, on the Blue Nile River in Ethiopia, is expected to become the largest hydroelectric power plant in Africa and will have direct consequences on Egypt and Sudan.

According to Hossam el-Moghazy, the Egyptian minister of water resources and irrigation, the Aswan Dam committee has discharged 10 million cubic meters (353 million cubic feet) from the Nile per day, for 10 days, to produce more hydroelectric energy.

In a news conference organized by the Ministry of Water Resources and Irrigation, Moghazy said that the emission of this amount of water from storage in Lake Nasser, which is considered strategic, occurred at a time when Egypt is struggling with drought and in terrible need to store every possible drop. “This is the cost of the terrorist acts committed by the extremist groups that bombed and destroyed electricity stations and towers, which led to long power cuts and the disruption of indispensable facilities,” Moghazy explained.

“We are sorry, but there was an electricity crisis. The emission of extra water for 10 days helped in solving this crisis by contributing to the production of hydroelectric power. There was significant improvement and the officials in the Ministry of Electricity overcame the crisis,” Moghazy said.

In a phone interview with Al-Monitor, former Minister of Water Resources and Irrigation Mohamed Nasr Eldin Allam criticized the government for wasting such amounts of water from the vital storage point in Lake Nasser, while the country is on the verge of a water crisis in the coming year, in addition to the scheduled activation of the first phase of the Ethiopian Renaissance Dam.

“When I was minister of irrigation, I prevented using the water of floodings to cleanse the Nile in addition to preventing any drop from the Nile from reaching the Mediterranean, despite its importance," Allam said. "All of this was to preserve every drop of water in anticipation of droughts, so Egyptians would never be thirsty.

“As minister of irrigation, I had to discharge certain amounts of water from Lake Nasser to solve urgent electricity crises. However, this would be done according to certain restrictions by storing the discharged water behind al-Qanater, Esna, Nag Hammadi and Asyut along the Nile, to reuse the water after having solved an electricity crisis, with the purpose of preserving the Lake Nasser storage. This is why the government is not doing the right thing right now.”

The scheduled activation of the Egyptian Renaissance Dam in September 2015 requires Egypt to store enough water from current flooding to avoid a severe water crisis. The first phase of the activation will have a major effect on electricity shortages at the Aswan Dam and it would be difficult to activate a number of its stations.

Mohamed Abdel Aty, former head of Nile water at the Ministry of Water Resources and Irrigation, revealed this in an interview with Al-Monitor. He also confirmed the inevitability of Egypt heading toward serious negotiations with the Ethiopian government to pursue the electricity-linkage project between the two countries and Sudan.

Abdel Aty said that this electricity-linkage project between Egypt and Ethiopia, in partnership with Sudan, will be much more important for Ethiopians since Ethiopia would be able to benefit from Egypt’s power-generating stations during the Nile’s drought period, while Egypt would be able to use the electricity surplus from the Ethiopian Reconnaissance Dam.

When asked about his opinion concerning the current amount of water discharged from the Aswan Dam to solve the electricity crisis, Abdel Aty explained that the purpose of this was not limited to increasing hydroelectric power generation, but it was also to cleanse the Nile from pollution. This cleanse also included the highly polluted Rosetta and Damietta branch rivers since the ministry stopped water emission to reduce pollution years ago, because of the water shortage.

“The Ministry of Water Resources and Irrigation and the Aswan Dam committee are capable of returning this amount of water back to Lake Nasser in the next month by reducing the daily discharge and storing larger amounts from flooding into the lake,” Abdel Aty said.

Haitham Awad, a professor of irrigation engineering and water hydraulics at the University of Alexandria, spoke to Al-Monitor concerning the Egyptian-Ethiopian electricity-linkage project. “The electricity-linkage project with Ethiopia will be beneficial for both parties. According to published studies, the power to activate the Renaissance Dam is for less than six hours per day and its efficiency is less than 30%," Awad said. "This is why Ethiopia needs alternative energy, which is available in Egypt since the country only relies on the hydroelectric power from the Aswan Dam 10% [of the time], while 90% of the time it uses thermal stations to generate electricity.

“Electricity exchange between the two countries is highly possible. The Renaissance Dam covers the electricity shortage in Egypt during rush hours, while Ethiopia regains electricity during the dam’s pause and during drought periods when there is no water to activate the dam,” Awad said.

Cairo is facing an electricity shortage, and its power cuts are lasting longer. The solutions for this crisis might result in more dangerous problems in the future. Egyptians will suffer darkness and drought in case there are no serious procedures to face the crisis of activating the Ethiopian Renaissance Dam and the water shortage it could cause in Egypt. This would eventually lead to a deficiency in the Aswan Dam’s electricity production, the first phase of which would reach 14 billion cubic meters (494 billion cubic feet) of water from the Nile, to be stored in the new dam in September, ultimately reaching 74 billion cubic meters (2,613 billion cubic feet) by the time the Ethiopian Renaissance Dam is fully activated.