The growing Egyptian population is straining the country’s drinking water supply, which mainly comes from the Nile. 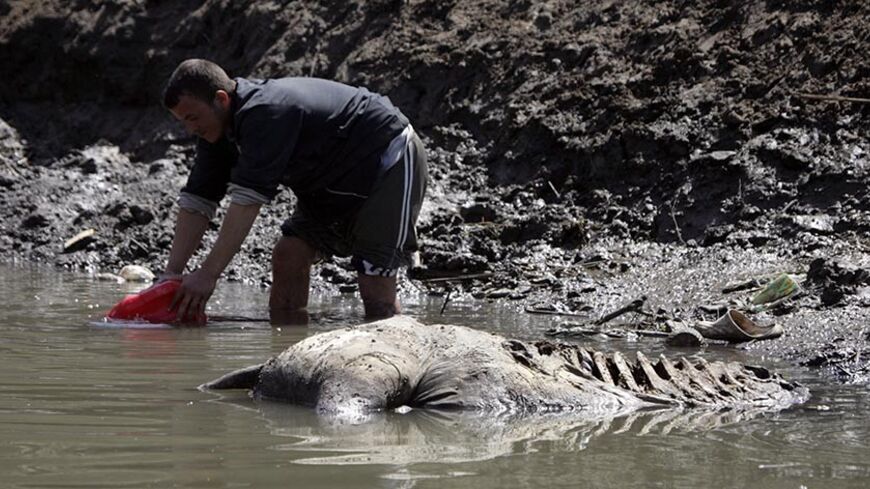 A man collects water from a canal beside a dead donkey on the Nile Delta north of Cairo, March 18, 2008. - REUTERS/Nasser Nuri

Every once in a while, the level of pollution in the Nile rises, which requires halting the drinking water from stations that supply many areas of Egyptian cities because the Nile water no longer meets cleanliness standards. These rises in pollution are often caused by the Nile's low water level.

Because of the Nile pollution crisis and its impact on drinking water, citizens are worried about the quality of their drinking water. Some Egyptian villagers are protesting and are angry at the government for being slow at resolving this problem, which could result in environmental disasters if the causes of pollution are not addressed and if not enough Nile water is available to wash away the pollution to the Mediterranean Sea.

Cases of mass poisoning have appeared in various areas as a result of polluted drinking water. Although there is a different reason each time, the irrigation minister is the one who is often held responsible for the water pollution. The Egyptian government has even been sued for the contamination of drinking water coming from plants that withdraw water from the Nile. Cleaning the Nile’s water requires opening up the valves and releasing extra water, especially during winter when the Nile’s water flow decreases.

The Rosetta branch, which is one of the Nile’s two branches and passes through the Nile Delta down to the Mediterranean Sea, has the highest pollution level, with increasing concentrations of ammonia and dissolved salts. This pollution kills fish and affects the drinking water stations in the provinces of Kafr el-Sheikh, Buhaira and Damietta, where most drinking water stations have stopped operating.

Government officials blame the problem on three main reasons: low levels of water in the Nile, especially during winter when less water is discharged from behind the High Dam; the presence of fish farms on the Rosetta branch; and some villages disposing their waste directly on the agricultural banks, which drains into the Rosetta branch.

He added that it is no longer possible to release more water into the Nile, to wash away the pollutants into the sea, because the increased demand by the growing population has caused water to be scarce. He added that they are working on eliminating the various sources of pollution and have taken measures to close all establishments that pour untreated waste into the Nile.

Abdul Muttalib added that Egypt is among the countries below the water poverty line and that it relies on the Nile for its essential needs. Egypt’s share of the Nile does not exceed 55.5 billion cubic meters (1.9 trillion cubic feet) a year, most of which comes from the Ethiopian plateau during the flooding in the summer starting in August. He said that for this reason water is stored in Lake Nasser to be used during the rest of the year and that the ministry is working through the public authority for the High Dam and the Aswan Dam on a program that organizes water usage. That program will regulate the winter period, which is essential for distributing a limited amount of water throughout the year whereby water usage is optimal.

He said that Egypt is forced to release water from Lake Nasser’s strategic reserve in addition to the daily quota during some emergency cases when the government gets reports that the pollution level went above the allowed standard and for fear that the water quality at drinking stations will be affected, otherwise people will die as a result of the water pollution.