In an interview with Al-Monitor, Egyptian Minister of Water Resources and Irrigation Mohamed Abdul Muttalib says that Egypt has not stopped bilateral cooperation with Ethiopia over the Renaissance Dam dispute. 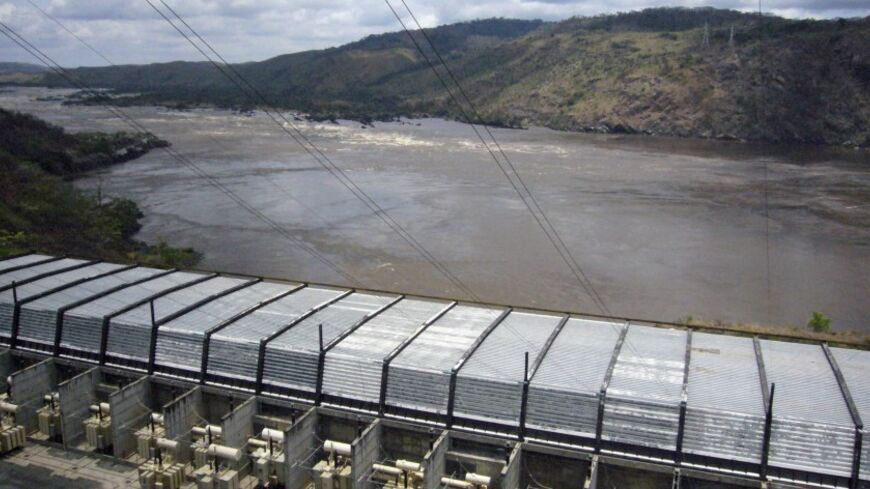 Egypt is looking into the possibility of moving Congo River water to the Nile basin; this is an arial view of the semi-functional Inga dam on the Congo River, Oct. 22, 2006. On March 20, the World Bank's board approved a $73 million grant to help the Democratic Republic of Congo develop an expansion of the dam. -

CAIRO, Egypt — In an exclusive interview with Al-Monitor at his office in Cairo, Egyptian Minister of Water Resources and Irrigation Mohamed Abdul Muttalib said that Egyptian support for technical cooperation projects for the development of the Upper Nile have not stopped. According to him, Egypt is continuing with its bilateral projects in Tanzania, Uganda and South Sudan, and even in Ethiopia. However, because of legal problems, it is a different matter when it comes to the cooperation projects that were being carried out under the umbrella of the Nile Basin Initiative. Abdul Muttalib noted that his ministry is determining whether it is physically possible to link the Nile and Congo rivers; the legal dilemmas of linking the two rivers are being left to legal specialists.

Al-Monitor:  How do you see the future of cooperation at the technical level between Egypt and the Nile Basin countries, and with Ethiopia specifically? What are the most prominent joint projects for the development of the Upper Nile that are still ongoing? What projects have stalled after Egypt froze its membership in the Nile Basin Initiative?

Abdul Muttalib:  Cooperation is continuing, and this is a very positive thing with regard to the future of Egypt's relations with the Nile Basin countries. Evidence of the continuation of this cooperation was translated in a practical way during my recent visit to Uganda to open well projects to provide a number of areas with drinking water. This came as part of an Egyptian program, granting $4.5 million to remove weeds and build berths for fishermen on the shores of Lake Victoria, to make fishing easier. And Ugandans in the region are very grateful toward the Egyptian government and the Ministry of Irrigation. There are similar agreements with the Tanzanian government, and we are working on preparing to open a number of wells to provide clean drinking water in underserved areas. Moreover, we are working to ensure these wells operate on solar power, to save them expenses, and instead of having to be manually operated. We are also working with Congo on a number of new bilateral projects.

There is also a good level of bilateral technical cooperation with South Sudan. This includes building a group of dams in the southern states. The Egyptian Arab Contractors Company is working to implement a number of well-digging projects, to provide clean drinking water to the areas that have no water. We will soon announce a ceremony to open a set of these wells and to hand them over to the South Sudanese government to solve the problems with drinking water in some regions. There is also a project sponsored by Egypt to create small dams to control the flow of rainwater in South Sudan.

And even with regard to the Ethiopians, bilateral cooperation has not stopped. Training courses for Ethiopian engineers at the Egyptian Ministry of Irrigation are ongoing. The latest batch of these Ethiopian cadres recently graduated from the ministry's training center, and they were given certificates in a ceremony that I attended personally, along with the Ethiopian ambassador in Cairo, Mahmoud Dardir. This confirms that the technical cooperation projects between Egypt and all the Nile Basin countries are ongoing, and we will continue to support the development of the Nile Basin, even with regard to Ethiopia. We have no problem with continuing discussion and cooperation [with Ethiopia], and we consider this to be the [way toward a] solution.

Al-Monitor:  And what about the projects that stalled after Egypt froze its membership in the Nile Basin Initiative?

Abdul Muttalib:  As I mentioned, none of the bilateral cooperation projects with the Nile Basin countries have been stalled, even with Ethiopia. We are working with the latter on a new experiment lab, as part of the activities of the Hydraulics [Research] Institute, to predict flooding. And we have no problem entering into bilateral partnerships with them for technical cooperation regarding the Nile Basin region. Yet the proposed projects that fall under the umbrella of the Nile Basin Initiative are stalled due to legal issues relating to our current position toward the Initiative, and thus we cannot work on these projects at the current stage.

Al-Monitor:  Does the government of Ibrahim Mehleb have a different perception of the Renaissance Dam crisis, or will it follow in the footsteps of [former Prime Minister Hazem] el-Beblawy?

Abdul Muttalib:  Obviously the positions are the same. We are talking about our rights — our rights to the Nile waters. No one disagrees on this issue, and the position will not change with a change of governments.

Al-Monitor:  A recent decision by the Egyptian government opened the door for the export of rice. Does this decision increase the burdens on the Ministry of Irrigation, which complains about the amount of water this crop uses, and given that the decision also increases annual water allocations for the summer agricultural season?

Abdul Muttalib:  Until now, the door has not been opened for the export of Egyptian rice. There has just been talk about a study for the decision, and it has not been ratified. The problem is that [this decision] would encourage farmers to heavily cultivate rice, despite the specified annual allocations for this crop, and [rice cultivation] consumes large amounts of water. We have a crisis concerning violations by farmers who are cultivating an area nearly twice the size of the 1 million feddan [1.038 million acres] that the government permits them to cultivate annually. And for each extra feddan of rice that is cultivated, this means that three feddan of corn are not cultivated, since the use of the water released from the High Dam is previously specified according to needs decided for each agricultural season. For this reason, the state increased the prices paid to farmers for corn, reaching nearly 340 Egyptian pounds per ardeb [$8.69 per bushel]. This will encourage farmers to work to increase the cultivation of corn instead of rice. The problem relating to export Egyptian rice involves the [high consumption] of water.

Al-Monitor:  Did Egypt falling below the water poverty level coincide with the preparation of plans to search for alternate water resources other than the Nile?

Abdul Muttalib:  Of course, we have projects for using all alternatives, whether groundwater or agricultural drainage water, after it has been treated for reuse. There are also seawater desalination projects using modern techniques, and they are currently being used in some coastal areas.

Al-Monitor:  Egypt has multiple underground water reservoirs, the largest being the Nubian Rock reservoir. Why doesn't [the state] rely on these reservoirs to solve the water shortage problem?

Abdul Muttalib:  We will be very cautious when it comes to using groundwater, because extracting this water is very costly. Moreover, we will work to restore this water in places where it is used, according to regulations in order to preserve these reservoirs, especially since Egyptian underground water reservoirs are nonrenewable. We are working very hard and we have many places where we have established agricultural development projects that depend on groundwater to [meet] the goals of the development plan. There are 150,000 feddan [156,000 acres] in Farafra that are irrigated by groundwater, and we are working to cultivate areas in the New Valley [governorate] that will entirely rely on groundwater. Furthermore, there are integrated agricultural projects in Egypt that we are establishing through relying entirely on groundwater.

Al-Monitor:  Prime Minister [Ibrahim] Mehleb announced that he will abstain from drinking bottled water, stressing his confidence in drinking water originating from the Nile. However, from time to time there have been crises in rural areas related to water pollution at drinking water stations that draw from the Nile. What is your comment?

Abdul Muttalib:  Personally, I drink tap water. At home I don't use bottled water, and I only use a normal filter. Thankfully there have been no problems and things are fine. But with regard to the recurrent crises, there are some things that cause water pollution problems in certain areas. For example, regarding the recent crisis in Kafar El-Sheikh and Al-Bahira, the problem was related to contamination from sewage or industrial water, and this is an accumulation of old problems. We have started to work on ending these sources of pollution, through closing four factories and companies along the Nile that were not abiding by the laws that prohibit dumping contaminated materials into the Nile. There is also cooperation with the Ministry of Housing to end the crisis of sewage overlap [with drinking water lines] and its effect on the quality of drinking water. We are working to propose new sewage plants, considering that this is the hope [for solving the crisis], and it is not acceptable to neglect the issue of Nile drinking water being contaminated with industrial and sewage water.

Al-Monitor:  With regard to the project to link the Congo River to the Nile, why has the Ministry of Irrigation changed its position on this project, from categorical rejection given that it is incompatible with international principles that stipulate not moving water from the Nile Basin to any other basin, to agreeing to participate in studies on this project that will be conducted by an Egyptian businessman?

Abdul Muttalib:  First, I want to make an important clarification, I have never changed my position toward the issue of the Congo River [project]. Recent announcements have noted that we are studying the project from a technical standpoint, and working with the team of Dr. Ibrahim al-Fayoumi in the framework of technical studies regarding the feasibility of the project. Meanwhile, other matters relating to international laws are not the prerogative of the Ministry of Irrigation. We will only work on putting in place a concept and design to determine the possibility of executing such a plan. We will leave the other matters to specialists and concerned parties, to study its legality. We did not change our position on the project. We are going through a period that requires us to support anything that could work to increase our share [of water], even if by a single drop.