In an interview with Al-Monitor, Egyptian Minister of Water Resources and Irrigation Mohamed Abdel Ati said that Cairo was working on finding solutions to the Renaissance Dam dispute that would satisfy all involved countries. 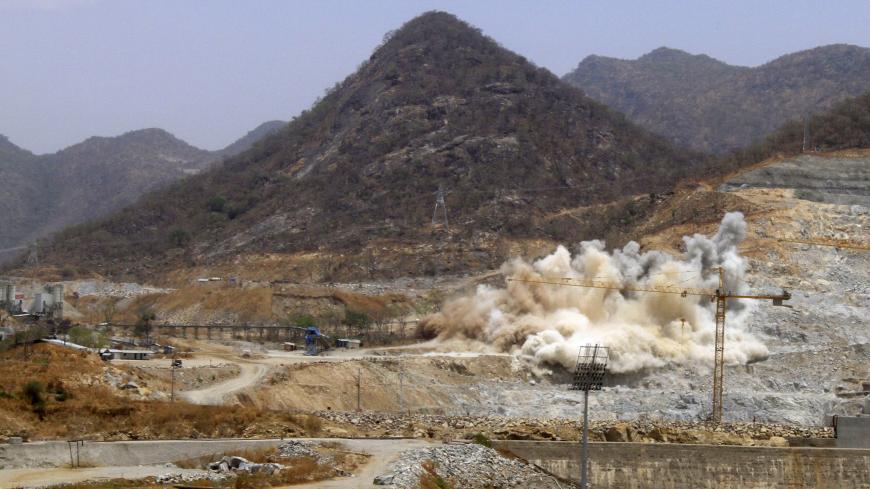 A cloud of dust rises from a dynamite blast that was part of construction work at Ethiopia's Grand Renaissance Dam along the Nile River in Guba Woreda, Ethiopia, March 31, 2015. - REUTERS/Tiksa Negeri

CAIRO — Egyptian Minister of Water Resources and Irrigation Mohamed Abdel Ati, who took office March 23 as part of the Cabinet reshuffle by the government of Sherif Ismail, has told Al-Monitor that Cairo is studying various solutions to resolve the Renaissance Dam crisis with Ethiopia. While he wouldn’t reveal details about these efforts, he indicated that Cairo is hoping for “full cooperation” with other Nile basin countries and would be focusing on solutions beneficial for all.

Negotiations between Egypt, Ethiopia and Sudan regarding the specifics of the dam have faced numerous challenges since they began years ago, and the tripartite talks are now stumbling on a new obstacle: the required technical studies. The studies are aimed at determining the extent of the damage the dam will cause downstream in Egypt and Sudan after operation begins.

Al-Monitor:  You were appointed minister of water resources and irrigation at a time when the country is facing many crises involving water. What are your main goals when it comes to overcoming the crises?

Abdel Ati:  First, I would like to clarify certain facts regarding the situation of water in Egypt, which is currently going through a critical phase. Egypt is a desert country that has no water resources except for the Nile, which provides 97% of our water supply. The Nile is our source of life and we will currently be focusing on treating sources of pollution — whether factories that dump their waste water in the Nile or [pollution from] the sewage system. This polluted water must be dealt with to improve water quality, since it is possible to recycle or reuse it six times, [something necessary] in light of the population growth. According to the last population survey in Egypt, the number of residents has reached 90 million, and by 2030 it will reach 130 million, while the rate of population in the other Nile Basin countries is also growing, and thus the demand of water is on the rise, which represents another challenge in managing the river system in order for everyone to benefit from its water.

Al-Monitor:  A statement made by the Egyptian prime minister before parliament a few days ago spoke about alternative scenarios to deal with the Renaissance Dam crisis with Ethiopia. Is Cairo heading toward international escalation against Addis Ababa?

Abdel Ati:  The political leadership in Egypt is convinced that a full cooperation with all Nile Basin countries will benefit everyone. We do not aim to achieve gains for Egyptians alone through our negotiations with Ethiopia; we do not want anyone to be a loser. There are indeed many solutions that are being studied in order to overcome the current crisis. I cannot give details about these scenarios but I can assure you that there are solutions and once agreed upon, they will be announced.

Al-Monitor: There are government reports that speak of a deficit of up to 40 billion cubic meters of water, used by Egypt for drinking, irrigation and development. Meanwhile, Ethiopia is planning to start storing water behind the walls of the Renaissance Dam. How will you cope with this?

Abdel Ati:  Although our water management is good and the Egyptian irrigation system’s efficiency is about 78% — the highest efficiency in Africa — the real average consumption of water is 105 billion cubic meters, and we get 55.5 billion cubic meters from the Nile. The remaining 80 billion cubic meters are covered by the reuse of wastewater [78% of 135.5 billion cubic meters is roughly 105 billion cubic meters]. We will work on clarifying the issue of water deficit, both at the domestic level in Egypt to spread awareness about water issues among the people, or at the level of external communication, because clarifying this issue is of great importance in our negotiations with the Nile Basin countries and Ethiopia. It is imperative that everyone knows that the Egyptians are not against development in the Upper Nile, but that they just fear the repercussions of the projects that do not take into account their share of water, which could include damages that directly reflect on water and food security, and affect the future of the coming generations.

Al-Monitor:  Egypt has maintained the freeze on its membership in the Nile Basin Initiative, a decision that came in objection to the Entebbe Agreement signed by five Nile headwaters countries. Will this freeze mean the halt of implementation for any joint development projects in the Nile Basin?

Abdel Ati:  Our position is clear when it comes to the Entebbe Agreement. We will not work in a context that goes against the Egyptian people’s interests. The common interests lie in achieving development on the banks of the Nile. This falls within the Egyptian government’s priorities and we are achieving this through bilateral cooperation with all Nile Basin countries and to the fullest extent. The government’s current plan relies on the fact that there is no ceiling for cooperation with the Nile Basin countries, and this is why there are many projects currently being implemented in the majority of the Upper Nile countries, whether through clearing the tributaries of the Nile or digging for clean drinking water wells in disadvantaged areas, in addition to the development of fishing marinas on the Nile. We are currently working on a special project to divert the course of the Nile from the Mediterranean Sea to Lake Victoria, to the largest shipping lane for trade.

Al-Monitor:  Egypt recently announced an ambitious project to cultivate an additional 1.5 million acres using groundwater. How will Egypt procure the necessary water for this project amid alarming talk about water shortages?

Abdel Ati:  The philosophy of the 1.5 million acres project relies on cultivating land of no more than 700,000 acres, while the rest of the space would be dedicated for urban and industrial development. We would use the groundwater in the early stages of cultivation only, because the majority of groundwater in Egypt is not renewable. Meanwhile, [future] water for the project would be provided through the wastewater resulting from the urban and industrial areas within the project; we would work on treating it and using it more than once. It is an integrated development project that came as a special solution to confront the climate change crisis and its expected impact on the sinking of the Delta areas. We will not leave the people who will be affected in these areas without planning alternative accommodation and jobs for them.

Al-Monitor:  The low water level on the Nile — which resulted in crises at drinking water stations and mass fish deaths — recently has led to controversy among the public about Ethiopia starting to store water at the Renaissance Dam. What is the truth of this matter?

Abdel Ati:  The truth is, there is a drought in the Nile Basin region and the amount of rainfall is below normal. We are hoping for an improvement over the coming months.