How this invasive flower is taking over the Nile 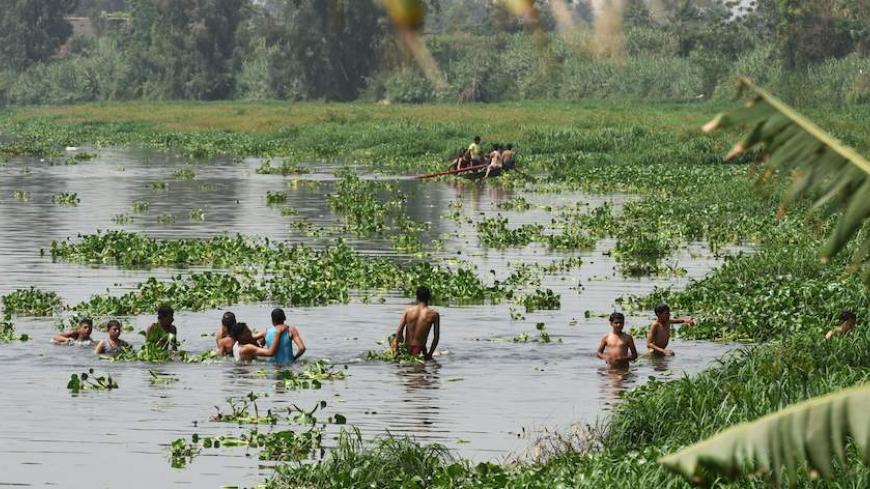 Egyptians take a dip in one of the branches of the Nile in the Menufiya district, north of Cairo, May 2, 2016. - MOHAMED EL-SHAHED/AFP/Getty Images

CAIRO — The water hyacinth is spreading, and Cairo is worried. Most measures taken to eliminate this plant have failed, and it threatens Egypt with an annual loss of 10% of its share of Nile waters.

The plants consume 3 billion cubic meters (792.5 billion gallons) of water yearly, which studies show is enough to plant about 100 new acres of land. Hamida Ali, the head of the Water Users Association of the Tetouan Sea Canal in Fayoum province, told Al-Monitor the hyacinths also impede water flow to canals and, in turn, to farms.

Though the Ministry of Water Resources and Irrigation already cleans the canal before the beginning of the summer crop season, farmers who are members of the Water Users Association often have to bear the expense of additional cleanings because of the hyacinths, Ali said.

The water hyacinth has existed in the Nile River since Muhammad Ali’s days in the 1800s, according to Salah Ezz, the head of the Nile River Protection and Development Department at the Ministry of Water Resources and Irrigation.

“This plant was not known in Egypt before Ali’s rule. It became popular during [Mohammed] Tewfik Pasha’s days, as it was used to decorate ponds in Egypt’s quarters,” he told Al-Monitor.

He said that the Nile’s Aswan High Dam, completed in 1970, was a main factor that contributed to the plant’s spread. Floodwaters once flowed quickly to the Nile during the summer and took plants with them to the Mediterranean Sea. The floodwaters are currently stored in Lake Nasser to manage water use throughout the year.

“The Ministry of Water Resources and Irrigation spends 35 million Egyptian pounds [$4 million] yearly … to remove the Nile water hyacinth from the river and from the Rosetta and Damietta sides,” Ezz said.

He added, “Fighting the plant’s presence is important to avoid the loss of 2 billion cubic meters from our Nile [water] share, as per the ministry’s estimates.”

The water hyacinth (Eichhornia crassipes) is commonly found in Egypt, Kenya, Uganda, Tanzania and Sudan. It is also common in the United States, Java Island and Australia. It spreads in the spring and summer and is dormant in the winter.

The Nile in Egypt provides a favorable environment for the proliferation of this plant due to the high concentration of chemical fertilizer residue that drains into the canal, as well as factory waste. Moreover, light seeps deep into the water, helping the plant spread rapidly, said Ahmad Fawzi, a professor at the Egyptian Desert Research Center and a water expert at the United Nations.

The water hyacinth is not entirely bad. It is used by some cities for its filtering properties and has even been studied by NASA.

“There is a bubble in the plant root that attracts and collects all kinds of heavy pollutants from the river,” Fawzi said. “On the other hand, the plant consumes a lot of water and [contributes to] high evaporation rates, not to mention that it obstructs the river's water flow.”

He added, “Water hyacinth is present in all rivers of the world. There are three methods of dealing with this phenomenon: the chemical method, by spraying pesticides on the leaves; the biological method, by breeding specific organisms and certain types of fish that feed on it; or the mechanical method, by removing the plant from the water.”

Ezz explained that the ministry will not use chemicals to get rid of the plant, given the impact on water quality. The ministry also refrained from using biological methods, since they take a lot of time and the water hyacinth grows quickly.

Fawzi called on the Ministry of Water Resources and Irrigation to include cleaning the Nile River in its water policy priorities. He recommends flooding the river with water from Lake Nasser — as much as 4 billion cubic meters — to remove the roots of the water hyacinth and harmful weeds and algae from the bottom of the Nile.

“Given the current water crisis, we cannot afford to repeat the cleaning operations, but this has become necessary,” he said.

The Ministry of Water Resources and Irrigation is getting ready this year to open the New Valley Project to carry floodwaters, and it anticipates that those floodwaters will be larger than the actual storage size of Lake Nasser.

Egypt consumes about 105 billion cubic meters of water annually; it gets 55.5 billion cubic meters from the Nile, and the rest is covered by reusing agricultural drainage water and some groundwater. However, most groundwater in Egypt is not renewable, Egyptian Minister of Water Resources and Irrigation Mohamed Abdel Ati told Al-Monitor in an April interview.

Haitham Awad, the former head of the irrigation and water hydraulics department at the University of Alexandria, explained that Egypt has not flooded the Nile since 2001 and makes up for it by launching the excess water from the Aswan High Dam during high floods in the New Valley Project.

“The mechanical method to get rid of the water hyacinth is ideal. However, the plant is left on the side of the Nile to dry, which could result in its spread all over again on both sides of the Nile and in it,” Awad added.

Given the water shortage, it seems Egyptian officials are unlikely to go along with the idea of flooding the Nile to wash away pollutants. However, a prominent source from the Ministry of Water Resources and Irrigation told Al-Monitor on condition of anonymity that the Nile is in desperate need of flooding, as reports show an increase in pollutants in its water. Meanwhile, it would be difficult to compromise 4 billion cubic meters of water, as Egypt’s Nile water share already is insufficient to meet the country’s needs for agriculture, drinking water and development projects.