Egypt is tackling its water crisis in cooperation with the European Union, which has pledged to finance irrigation-development projects and improve the country's water management system. 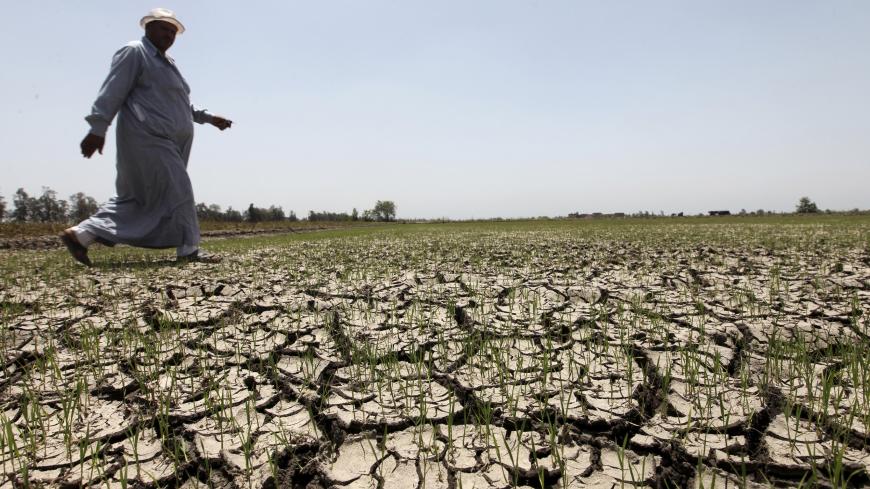 An Egyptian walks past his drought-damaged crops on his farm, formerly irrigated with water from the Nile, al-Dakahlya, Egypt, June 4, 2013. - REUTERS/Mohamed Abd El Ghany

CAIRO — Egypt’s Water Resources and Irrigation Minister Mohamed Mohamed Abdel Aty announced in a July 24 press release that an agreement had been reached with the European Union (EU) to finance an irrigation-development project and improve the country's water-management system. The Egyptian government has been seeking to expand cooperation with international partners to address the threats to Egyptian water security.

Egypt suffers from water scarcity, with a water deficit of 20 billion cubic meters (16.2 million acre feet) a year. The government has been trying to overcome the increasing pressure on water resources with an emergency plan that runs through 2021. The plan includes measures aimed at increasing water-use efficiency, reusing treated wastewater, expanding water desalination in coastal cities and reducing cultivation of water-intensive crops, such as rice.

Iman al-Sayed, head of the Planning Department at the Ministry of Water Resources and Irrigation, told Al-Monitor, “The emergency plan that the government is now implementing, in coordination with the Ministries of Housing, Agriculture and Local Communities, aims at dealing quickly with the deteriorating water situation within the framework of the National Water Resources Plan until 2037.”

She said, “In response to the deteriorating water situation, the Ministry of Irrigation has been cooperating with the EU on several projects, most importantly the draft of the National Water Resources and Irrigation Plan for Egypt, 2017-2037, as well as projects using modern irrigation systems and water treatment in water drainage systems.”

Sayed added, “The issue of water is at the top of the EU priority list when it comes to cooperation projects with the Egyptian government because of the critical water situation in Egypt and the great response to water issues at the level of the international community. Most of the EU projects are dedicated to the drinking water and sanitation sectors.”

Sandra De Waele, deputy head of the EU delegation to Egypt, told Al-Monitor, “Egypt's water scarcity is a challenge that requires rapid action to rationalize consumption, develop modern irrigation systems and minimize losses. The EU was among the first development partners to assist Egypt in supporting sustainable water management through political dialogue and close partnership with all relevant stakeholders in the Ministries of Irrigation, Housing, Local Development, Investment and International Cooperation, as well as civil society organizations working in the field of water, research centers, research institutes and universities."

De Waele added, “The EU-WATER Sector Technical Assistance and Reforms Support [EU-WATER STARS] is the most significant cooperation project with the Ministry of Water Resources, estimated at 4.3 million euros [around $4.9 million] to finance the implementation of the project within 30 months.”

According to an unpublished EU memorandum obtained by Al-Monitor, the project aims to assist the Ministry of Water Resources and Irrigation in achieving the water security objectives set out in the Sustainable Development Strategy for 2030 and the National Water Resources and Irrigation Plan for 2037 and building the capacity of the central government and local staff to support stakeholders in managing infrastructure as well as managing and operating water systems, taking into account the deteriorating situation and water scarcity.

The plan has four basic objectives: to rationalize water use, enhance water quality, find new alternatives for water resources and to improve management through raising awareness and legislation.

The memo says that EU-Water STARS is to focus on supporting "the institutional and financial environment through the development of legal frameworks and the modernization of water management frameworks through the establishment of the Water Accountability Unit (WAT). The WAT will be responsible for operating and maintaining decision-making systems and strengthening water quality control systems. The project also includes assessment systems within the Ministry of Water Resources and Irrigation. This is in addition to assisting the Ministry of Irrigation in developing communication and information plans to raise public awareness."

Water experts in Egypt said the Egyptian government's attention has been drawn to the magnitude of the threat posed by water scarcity not only because of internal issues, including the widening gap between available resources and increasing needs due to population growth, but also because of the threat to Egypt's historic share of the Nile water due to the construction of the Ethiopian Renaissance Dam. Egypt's share historically has been 55.5 billion cubic meters annually under a 1959 treaty.

“The problem of water in Egypt has taken a different turn with the development of the Ethiopian Renaissance Dam, with the risk of water scarcity increasing,” Ali al-Bahrawi, a water resource expert and professor at the Faculty of Engineering at Ain Shams University, told Al-Monitor. “The government began to think of new ways that had not been previously discussed to deal with water scarcity, rationalize consumption and reduce water loss through careful plans to prioritize water use according to the needs of different sectors." He said this would start "with population, industrial and agricultural needs in order to achieve stability and water security.”

Bahrawi also said, “The importance of EU cooperation and support of government projects and programs lies in the fact that this is not limited to financial support alone, but to providing expertise and assistance in monitoring and control to ensure the effectiveness of the different projects in accordance with the experience of European consulting companies and to benchmark against similar programs applied in countries suffering similar water crises to Egypt's.”