The film, which was broadcast on an unofficial government channel, shows why Afghans living in Iran are fighting in Syria in support of President Bashar al-Assad. 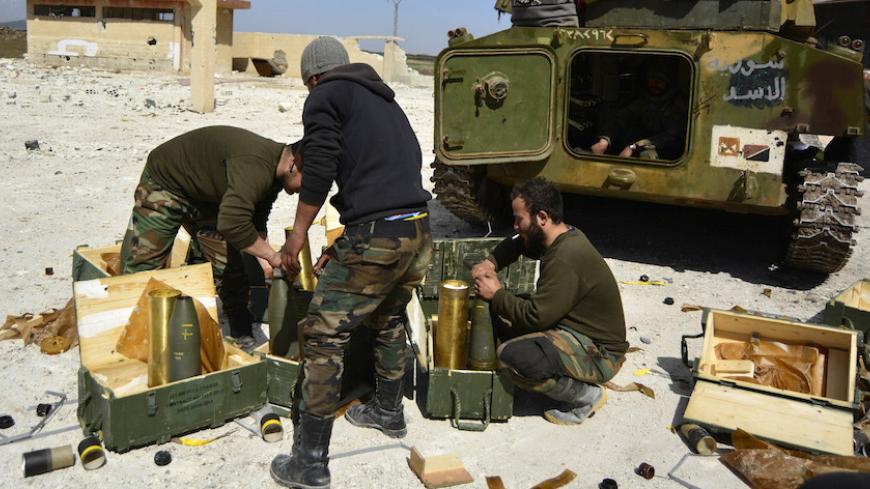 Fighters loyal to Syria's President Bashar al-Assad go through weapons near a tank after regaining control of Hamreet, a town south of Damascus, in the Daraa countryside, March 1, 2015. - REUTERS
Farahmand Alipour
@@FarahmandAlipur
May 1, 2015

The documentary, aired by Ofogh TV — an unofficial media arm of the Islamic Revolutionary Guard Corps (IRGC) — indirectly shows how the IRGC established the Fatemion Brigade, made up of Shiite fighters from Afghanistan, to support Syrian President Bashar al-Assad. This is probably the first time that the Iranian government has aired material that clearly shows that paramilitary forces from other countries are in Syria supporting Iran’s ally Assad.

"Moalem" describes how the Rif Dimashq city of al-Malihah, home to 20,000, was conquered. The protagonist says, “We fought for seven months until we were finally able to liberate al-Malihah. We closed in on the city from three sides and about 50 of our fighters were martyred before we liberated the city. The soldiers of the Fatemion Brigade had promised Sayyida Zaynab [the sister of Imam Hussein] that they would liberate the city. Al-Malihah is very important strategically and the opposition tried very hard to hold onto it. The Syrian army took action first and then the [Iraqi Shiite paramilitary] joined in and finally the forces of Hezbollah arrived. However, nothing could be done and eventually the Fatemion Brigade entered the field and liberated the city.”

In October 2014, Iranian media outlets reported that the Syrian army liberated al-Malihah and referred to Shiite fighters from Pakistan, Afghanistan, Lebanon and Iraq as “Defenders of the Haram.” According to the media, these fighters came to Syria from all over the world to resist the Sunni jihadists who are determined to destroy Shiite holy sites, including the shrine of Sayyida Zaynab.

"Moalem" includes footage of Alireza Tavasoli, the commander and founder of the Fatemion Brigade. According to Iran’s conservative media outlets, Tavasoli was a figure trusted by Quds Force Cmdr. Qasem Soleimani. Tavasoli, known as Abu Hamed, was a Shiite from Afghanistan who resided in Iran. He fought in Afghanistan's war against the Soviet Union as well as in the Iran-Iraq war. He was killed last winter in Syria.

Over the past two years, numerous Shiites from Pakistan and Afghanistan have been buried in Iranian cities like Mashhad, Qom and Tehran. According to a UNHCR report, nearly 1 million Afghans live in Iran. Although it appears that the majority of Afghans killed in Syria had been living in Iran previously, other reports indicate that some of the Afghans traveled directly from Afghanistan to Syria to fight.

Iranian opposition newspaper Kayhan London published an interview with an anonymous Afghan Shiite fighter in Syria who clarified how and why these fighters ended up abroad. He said that Afghan Shiites meet IRGC-affiliated clerics at local mosques, and these clerics introduce them to members of the IRGC. Eventually, these fighters travel via ground transportation to Iran, where they are trained for four months at a Tehran military garrison and then put on planes to Damascus.

His motivations for fighting in Syria were to earn a salary and to make sure that he will not be deported from Iran. He has been living with his family in the city of Qom for the past 10 years and for every three months he spends in Syria, he receives 6 million tomans ($2,115) and can take 20 days off to visit his family in Iran.

He says that originally, the Afghan and Pakistani forces were in the same battalion with the Syrians, but that these forces were later separated. “I don’t know what was the reason for this, but there were a lot of discussions among us. For example, with the prisoners of war, we had to hand them over to the Syrian forces, but later we realized that they were not being handed to the higher ranking officials. We don’t know what was happening to them.”

Iranian parliamentary commissions have discussed and published several articles on the issue of Iranian residency for Afghan fighters. Reformist newspaper Shargh reports, “The National Security Commission of the parliament is looking to revise an article in the constitution and give more rights, including Iranian citizenship, to non-Iranian fighters, soldiers and elites.”

When a Shargh reporter asked Hossein Naghavi Hosseini, spokesman for the National Security Commission, whether this parliamentary proposal has anything to do with Afghan refugees volunteering to fight in Syria and Iraq, he answered, "There are no direct relations, but cases such as these motivate the parliament to make these suggestions. We have shared values and beliefs and we believe in safeguarding these beliefs."

Some Arab media outlets report that these Afghan fighters were deployed to Syria in late 2012, when the Syrian army had experienced several defeats. Afghanistan's Foreign Ministry recently denied that Iran has forced Afghan citizens to fight in Syria, instead asserting that individuals are motivated to fight in Syria by their own personal beliefs.