Tensions between Sunnis and Shiites in Lebanon are rising as a result of the conflict in Syria, reports an Al-Monitor correspondent in Lebanon. 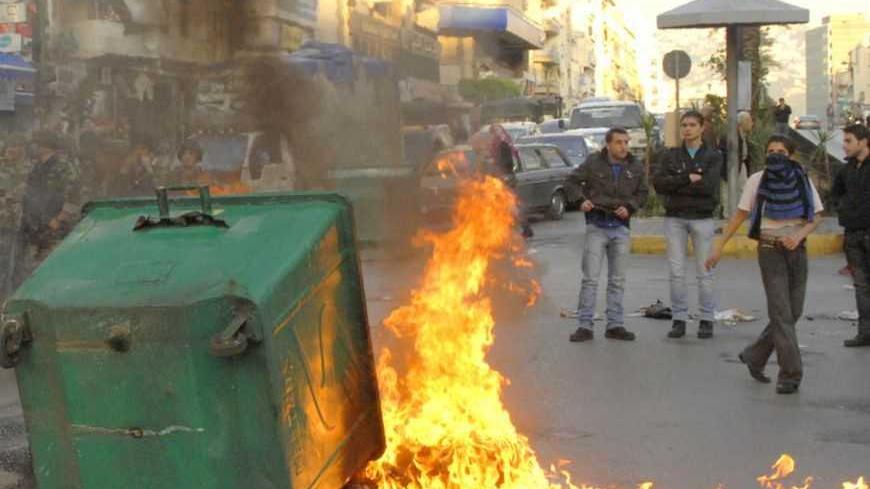 In the past few hours, Lebanon almost fell into the dangerous situation against which officials have recently warned, namely the spillover of the Sunni-Shiite strife plaguing many of the countries in the region, such as Iraq, Syria and Bahrain.

According to informed sources, on the morning of March 16, the body of a Hezbollah member arrived in the town of Mays in southern Lebanon after he was killed in the fighting in Syria  alongside the Syrian regime’s army.

The exact location of the killing remains unknown, but initial reports say he was targeted by a sniper while he was standing at a checkpoint set by Hezbollah guerrillas near the Sayyida Zaynab shrine in Syria. A Hezbollah force, estimated to comprise hundreds of fighters, is spread throughout the Sayyida Zaynab region in the south of Damascus to ensure that the shrine is protected by Shiite Muslims. The shrine was subject to several attacks last year by fighters belonging to the Syrian opposition, mainly extremist Sunni Islamists residing in the Qodm and al-Hajar al-Aswad neighborhoods (whose residents are immigrants from the Golan) adjacent to Sayyida Zaynab.

As the news of the funeral of a Hezbollah member spread, a group of supporters of Sheikh Ahmad al-Assir, (a hardline Salafist calling for the fall of the Syrian regime, for the support of the Syrian opposition and for the Sunnis in Lebanon to fight the injustice of Hezbollah, which is allied with Iran and the regime in Damascus), established checkpoints in the city of Sidon, (the capital of South Lebanon), distributed sweets to passers-by and gloated over the death of a Hezbollah member.

Meanwhile, residents of Haret Saida (a suburb adjacent to the city of Sidon and home to Shiite supporters of the two largest Shiite parties in Lebanon: Amal and Hezbollah) learned about these checkpoints, which prompted some youths to drive to the area of the mosque overseen by Assir and start provoking his men. Afterwards, a masked supporter of Assir fired toward Haret Saida. He was arrested by the Lebanese army and is under investigation.

In the framework of this series of sectarian provocations and reactions, a group of Shiite youths in Beirut beat and humiliated four Sunni preachers. They were taken to Beirut's Makassed Hospital, which is affiliated with a Sunni charity institution. Throughout the night, hundreds of Sunni youths gathered in front of the hospital demanding revenge.

Assir supporters and other Salafist groups blocked some of the capital's streets with burning tires in protest against the attack on the four Sunni sheiks.

Security sources told Al-Monitor that last night's events (March 17-18) were an additional wake-up call, confirming that the fears of sectarian strife in Lebanon — similar to what is happening in Syria and Iraq — are very serious, due to the growing sectarian tension and the severity of the Lebanese split over the Syrian developments. Add to this that the overlap of the Lebanese and Syrian situations is affecting Lebanon at the social, security and political levels.