As tensions stemming from the Syrian crisis continue to mount in Lebanon, two pro-Hezbollah Sunni sheikhs become the target of assassination attempts. 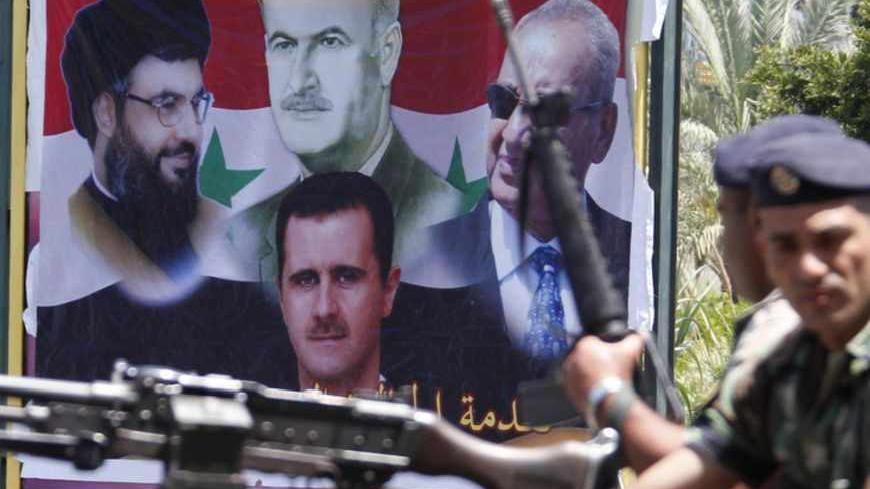 Lebanese Army soldiers stand atop their army vehicle as they secure an area in Sidon, during a protest organized by Syrians living in Lebanon in support of the Syrian government on May 12, 2013. - REUTERS/Ali Hashisho

At dawn on June 3, Sheikh Maher Hammoud, the imam of the al-Quds Mosque in Sidon, became the target of an assassination attempt as he left his home to lead prayers. At approximately the same time, another sheikh, in northern Lebanon, found himself the target of a similar attack.

The Lebanese security forces believe there is a link between the two incidents, because the targeted sheikhs are both Sunnis who support Shiite Hezbollah. It is thought that the attempts on their lives were a message from al-Qaeda or parties in Lebanon with similar ideologies to all Sunni sheikhs who support Iran and Hezbollah that they will meet with similar fates if they fail to change their views.

Hammoud, well known as a moderate Sunni cleric, had recently been using his sermons to challenge extremist Salafist sheikhs calling for "jihad" against the Shiites. He is also one of the most prominent figures who uses sharia to counter the propositions put forth by Sheikh Ahmad al-Assir, also from Sidon, who has called on his Sunni supporters to confront Hezbollah and Iran in Lebanon.

The assassination attempts have increased concerns about Lebanon's security situation, which has been worsening due to repercussions of the Syrian crisis. Hezbollah's participation in the Syrian war has led to an increase in already existing tensions between the party and Salafist forces operating in Lebanon.

Jabhat al-Nusra and the Free Syrian Army had earlier warned that if Hezbollah fighters did not withdraw from the city of Qusair and surrounding villages by midnight June 2,  they would carry out reprisals against Hezbollah targets. The assassination attempts took place hours after the passage of that deadline. The warning led to a state of anxiety in Shiite-majority areas in Lebanon, particularly in Beirut's southern suburbs, long considered a Hezbollah stronghold.

Lebanese sources who have been following events note that the daily security situation in Lebanon has begun to resemble that of Iraq, with Sunni Salafists constantly directing random rockets at Shiite residential areas. Moreover, it is expected that at some point in the future this will lead to Shiite bombings of Sunni areas.

Thus, the assassination attempts against the two sheikhs, in light of their political support for Hezbollah, represents a dangerous escalation suggesting that the violence in Lebanon might become more deeply entwined with what is happening in Syria. Slightly more than two months ago, Salafists in Syria assassinated Sheikh Mohamed Said Ramadan al-Bouti because of his support of what his killers call the “godless Alawite regime.”

All of these dangerous developments — which point to Lebanon slipping toward a security vacuum that will be filled by Sunni-Shiite strife — are occurring amid a political vacuum resulting from divisions among political parties and sectarian groups over an electoral law needed to guide parliamentary elections scheduled for June 16. On May 31, however, the current parliament extended its term for 17 months, which it tried to justify by stating that the tense security situation had made it impossible to hold elections.

President Michel Sulieman has submitted an appeal to the Constitutional Council opposing the extension, but the attempt may not be successful given that the majority of the council members are affiliated with the political forces that voted for the extension.

A few days ago, on June 3, the Saudi ambassador to Lebanon, Ali Asiri, issued an unprecedented warning about indications of sectarian strife in Lebanon. Kingdom representatives typically avoid talking about the existence of strife in any official or public way.

The irony is that two months ago, Saudi Arabia, through its highest political officials, proclaimed that Lebanon would have a brilliant summer season, adding that the Gulf states would encourage their citizens to travel there. Asiri’s recent statement clearly indicates that optimism about Lebanon is dramatically declining.