Should Saudi Arabia test Iran’s offer of diplomacy on Yemen? 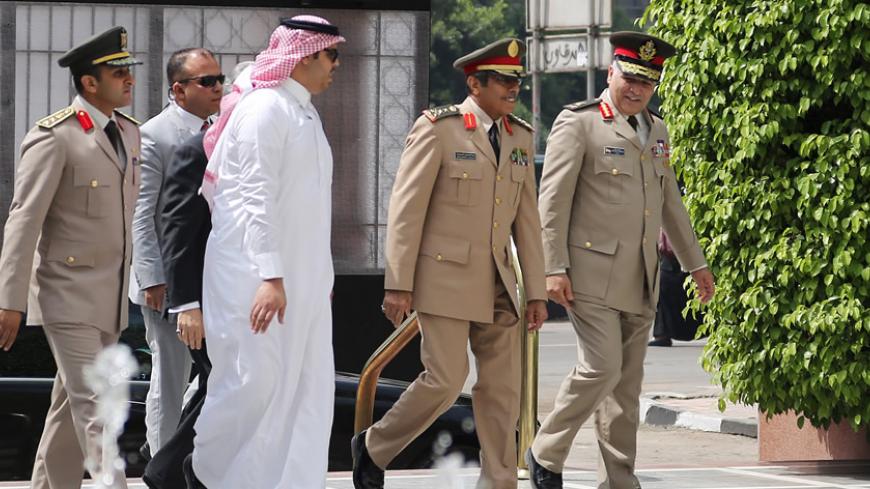 Abdulrahman Al-Banyan (2nd R), Saudi Arabia's chief of staff, arrives at the Arab League headquarters to attend an Arab defense ministers meeting in Cairo, April 22, 2015. The talks are expected to focus on the war in Yemen, Iran’s growing influence in the Middle East and security threats from the Islamic State. - REUTERS/Asmaa Waguih

Iran’s Deputy Foreign Minister Hossein-Amir Abdollahian claimed credit for Iran in helping broker a pause in Saudi airstrikes in Yemen last week, but warned of the consequences should Saudi Arabia continue its attacks.

Ali Hashem reports that Iran, working with Omani officials, “conveyed a serious message to Saudi Arabia, that the Houthi movement is capable of responding to Saudi coalition air raids on Yemen inside Saudi Arabia through its mid-range missiles and anti-aircraft rockets that had not yet been used. A Houthi source in Sanaa told Al-Monitor over the phone that the group’s leadership decided to adopt what it called strategic patience in an attempt not to make a consensus difficult.”

Abdollahian told Al-Monitor, “Iran backs a political path and stresses the importance of dialogue. … If Saudi Arabia continues its aggression on Yemen, this will block the political path. This will pose a real threat to regional security and stability.”

Writing in The New York Times, Iran’s Foreign Minister Mohammad Javad Zarif suggested that Yemen would be “a good place to start” for a “serious discussion” of regional security in the region under United Nations auspices.

As reported here and elsewhere, Iran’s Supreme Leader Ayatollah Ali Khamenei has offered dialogue “on other issues” if the nuclear negotiations between the five permanent UN Security Council members plus Germany, or P5+1, and Iran are successful.

It might be worth testing Iran’s proposal for dialogue on Yemen and other regional security challenges. Iran is not going to be chased out of its support for the Houthi rebels in Yemen, and Saudi Arabia, with some agile diplomacy, can still emerge the ultimate regional broker of Yemen’s political future. But not with airstrikes on this beleaguered country. Few believe that Saudi Arabia is winning, or can win, with its military-first approach. The New York Times reported that the Obama administration had applied pressure on Riyadh to end the airstrikes. A Wall Street Journal article on April 24 explained that while the Houthi insurgents lack air power or air defense capabilities, they can be a formidable land force.

If the Iranian offer of dialogue is sincere, it indeed might be a “good start” for Riyadh and Tehran to try to bring peace to the region’s poorest country, which hardly needs a civil war morphing into another endless regional proxy war. The Office of the UN High Commissioner for Human Rights announced April 24 that 551 civilians, including 31 women and at least 115 children, had been killed since the launch of Operation Decisive Storm by the Saudi-led "coalition" March 25.

Maysaa Shuja al-Deen reported this week from Yemen on the offensive’s human toll: “No one is safe in Yemen as death and fear prevail. The bombings do not exclude anyone, not even al-Mazraq refugee camp located in the Hajjah governorate close to the Saudi borders, where at least 45 people have lost their lives. The two warring parties have exchanged accusations as to who is responsible for what is happening. However, the truth is that this war is producing random death and no one is lifting a finger to avoid it.”

The sentencing of ousted Egyptian President Mohammed Morsi on April 21 to 20 years in prison for inciting violence and authorizing illegal detentions and torture reveals that the political and religious fault lines that divide Egypt continue to run deep.

Rami Galal spoke this week with Buthaina Khashak, the undersecretary of the Ministry of Education in Giza, who orchestrated a bonfire of schoolbooks considered "extremist," i.e., biased toward the Muslim Brotherhood.

Galal wrote: “Khashak explained that the book burning was a patriotic moment, accompanied by patriotic songs in the presence of children. She said that it was one of the happiest moments in her life, because burning these books saves the children’s minds from extremism and terrorism."

The burning of books produced outrage among civil society organizations across Egypt, and comes in the context of a broader campaign by the Ministry of Education to ban some religious texts and references from schoolbooks and courses to counter extremism, provoking outrage from Salafist groups.

Ayah Aman reported: “The Egyptian state is still working on multiple fronts to track down anything that could promote radical and terrorist ideas, including any expression that remotely hints of violence in the school curricula. However, the challenge remains significant in light of Egypt’s poor education system in general and the wide variation in the religious discourse.”

Meanwhile, terrorist groups have continued their attacks in the Sinai Peninsula. A correspondent in Sinai reports that the rise in violent incidents has “led to a state of controversy and bewilderment among the Egyptian people, as terrorist attacks are becoming more aggressive despite the positive statements released by the military regarding the elimination of terrorism.”

Vitaly Naumkin writes that the Russian decision to lift the ban on deliveries of anti-aircraft missile systems to Iran disregarded Israeli concerns:

“It's wrong to suggest — as some Western analysts did — that behind this decision stands Moscow’s desire to torpedo the deal between six world powers and Iran: The systems won’t be delivered any time soon, and Iran won’t be in a position to put serious pressure on Russia in the oil and gas market for some time. It's significant, however, that in this case the concerns of Israeli leaders were not taken into account. I recall that in the recent past, Moscow canceled the delivery of analogous weapon systems to Syria because of Israeli objections, as Putin mentioned in his TV appearance.”

Naumkin describes five pillars of a more assertive Russian diplomacy in the Middle East: “First of all, it maintains a strong focus on bilateral relations. Second, it attempts to refrain from confrontational statements and, even more so, actions toward those countries with which Russia disagrees on certain issues of global and regional policy. (Thus, criticizing the Arab coalition’s use of force against the Houthis in Yemen does not prevent Moscow from actively reinforcing ties with Egypt.) Third, it strives to diversify or develop relations with states in conflict with each other. Fourth, it wants to create active contacts with opposition forces, in addition to official authorities (to whom Russian diplomacy was limited in the past). And, finally, it wishes to play a mediating role in conflicts, without claiming a monopoly or opposing other players, in particular the United Nations.”

Maxim Suchkov describes Russia’s approach to “soft power” in the Middle East, including the rise of media platforms like RT:

“The channel has grown 26-fold since [2009]. In seven Arab countries — Syria, Egypt, United Arab Emirates, Saudi Arabia, Lebanon, Kuwait and Jordan — RT is watched by 5 million people, while its overall audience in the Middle East, North Africa and Arab diasporas in Europe, according to its own sources, spans more than 350 million viewers. In May 2012, the number of views of its YouTube channel amounted to 57 million. Census shows this popularity became possible for two prime reasons: RT 'represented alternative perspective on the world events' (37%) and 'has [attractive] information content' (21%).”

While acknowledging that Russia “has a long way to go to make itself look more attractive,” people-to-people exchanges can complement media as a source of "soft power," according to Suchkov: “[O]n a people-to-people level the focus is shifting toward two other potentially critical resources — tourists and pilgrims. Both, however, are a double-edged sword for Russia’s stance in the region. Russian tourists may have quite a specific reputation reinforcing all kinds of stereotypes, which is a rather negative trend for Russia’s image in the region. But they were also the ones ready to spend considerable amounts of money and act as saviors to many tourist industries in popular destinations in the wake of the Arab Spring, when many Europeans refused to travel there for safety reasons. There are about 400 registered businesses with Russian capital in Egypt alone, with a total amount of direct investments of $100 million, most focusing on tourism.”